Use the above links or scroll down see all to the Xbox 360 cheats we have available for Battlefield 2: Modern Combat. 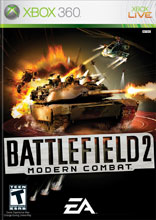 All you have to do is be the special ops person and stick four things of C-4 on the helicopter and fly it until you want to jump out. Then you exit the helicopter and deploy your parachute and let your helicopter hit the ground and it will blow up. The C-4 will give it a little extra "boom". I use it all the time online.

Achieve the indicated number of medals, points per hour (PPH), and points to earn the corresponding rank.

Go to the "Backstab" map and play as a sniper. Get to a good location and snipe. Only snipe people who are standing still. Note: This requires patience.

Be a Special Ops and get out your C4s. Get near a vehicle and put one or two C4s on it. Keep your detonator out and go in the vehicle. When you see an enemy, get out your vehicle so that it's ghost rides into the enemy. When the enemy is near the vehicle, detonate the C4s.

Accomplish the indicated task to get the corresponding number of Gamerscore points:

At the beginning of the Air Traffic Control level, you will start out as a sniper. Directly behind you will be a chopper. Turn around as soon as the level begins to get a good shot. Shoot the pilot and the chopper will fall a short distance directly in front of you. Make sure you hit the pilot, and not the chopper or it will explode. Note: It may require a few attempts to hit the pilot. You can then get in and shoot out the turrets with the chopper. When the jeeps come by, hotswap to one and go directly past the turrets and into the helicopter inside the heliport. You will not have acquired two helicopters, making this level very easy.

When doing the RPG Rocket Challenge, the further you are away when you blow a vehicle up, the more points you get. An easy way to get points is to take a vehicle's shield down at close range, hotswap to a further away RPG man, then finish the vehicle off.

When doing the Hotswap Challenge, it is easier if you move towards the marker to make more "Hotswaps" available. By doing this, you will not lose 1,000 points.

Unlock the Frag Grenade weapon challenge, then successfully complete all rounds and kill all enemies through round ten. If every enemy is killed, you will go into round eleven. In this round, the soldiers move and create the shape of first an "E", then an "A".

When flying a helicopter in Multiplayer mode, if you start to get laser targeted (not GTAM), fly as fast as possible, and at the same time get as low to the ground as you possible. If done correctly, the missile will hit the ground and miss you most of the time.

The following commands must be input during gameplay and within the span of one second: Hold the LB and BR buttons and press right, right, down, up, left, left.

During the game, hold LB + RB and quickly press Right(2), Down, Up, Left(2) to unlock all weapons in the game.

We have no unlockables for Battlefield 2: Modern Combat yet. If you have any unlockables please submit them.

We have no easter eggs for Battlefield 2: Modern Combat yet. If you have any unlockables please submit them.

We have no glitches for Battlefield 2: Modern Combat yet. If you have any unlockables please submit them.

We have no achievements or trophies for Battlefield 2: Modern Combat yet. If you have any unlockables please submit them.