Use the above links or scroll down see all to the PlayStation 2 cheats we have available for Black. 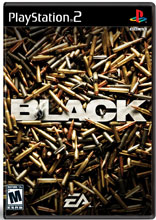 During the final battle there is a safe (one of the secondary objective items) on the left walkway. If you destroy the safe, a message similar to "You have destroyed Secret Burnout Renders" will appear.

When you are in the middle of putting a suppressor on your weapon and enemies appear, fire and the suppressor with be on with your weapon going instantly into firing position.

In the first mission, on any difficulty setting other than Easy, you can destroy Intel as a secondary objective. One of those Intel-containing laptops once destroyed holds information on an "Experimenting aircraft code named 'Aurora'." The "Aurora" is supposedly a real, yet secret, aircraft. Most of the Intel is real or based on real world information.

No Blur On Reload

To get rid of the blur when you reload, press X to reload then immediately hold Square, or press X to reload then tap Triangle. To get rid of the blur with automatic reload, tap R1 and everything will become clear. Also when reloading the M16 MP5, etc. with X, some have longer reloads. You can stop a X reload and fire whatever is remaining in the magazine by pressing R1. You can also speed up reload by tapping R1.

Press R3 to zoom in x2 with the Sniper Rifle. When you are in this position, press D-pad Up as if you were changing the firing method of your weapon.

Immediately after shooting a round with the M16A2, switch weapons then quickly switch back and the grenade launcher will be reloaded.

When reloading the Remington shotgun, the shells are red. However, sometimes the shells are black, and there are no black shotgun shells in the game.

Use destructive objects to your advantage to shock, hurt, or even kill enemies.

The easiest way to kill RPG troopers is to wait until they fire a round (pop out then hides behind something). While they are reloading, shoot at his midsection. If successful, you will shoot and detonate the RPG he is trying to reload, blowing him up.

Once you get to the part where someone with a rocket launcher shoots at you from a ship tower, kill him then go down by the bottom of the ship. On the side of the steps, you will be asked to switch weapons for an RPG.

In the first border camp, there are houses on the right side of the road (as you enter the camp). Inside the houses are bulletin boards on the wall. Posted here are two pictures, which are the actors who portray Sgt. Kellar - Marty Papazian (unconfirmed likeness) and his interrogator, played by Paul Pape.

Enter as your profile name 5SQQ-STHA-ZFFV-7XEV

We have no easter eggs for Black yet. If you have any unlockables please submit them.

We have no glitches for Black yet. If you have any unlockables please submit them.

We have no guides or FAQs for Black yet. If you have any unlockables please submit them.

Submit a cheat for Black