Use the above links or scroll down see all to the Xbox cheats we have available for Black. 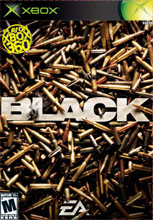 The M16 A2 is basically an M16 but with a grenade launcher attached to the bottom, and its silver. And the way you get it is by unlocking Black Ops mode, and to do this you beat the game on hard. And that's it, you start with this gun on every level in Black Ops mode.

The M249 SAW, RPG (with at least four rounds), and at least two grenades (not those at the room entrance) are required for this trick. Do not enter the room because the door closes and it becomes difficult. Do not use any RPG rounds as you will need them later. Crouch at the door entrance and shoot the man with the flak armor in the back of the head. Then, shoot the others on the ground. To kill the men on the walkways, shoot the red object on the right side (on the walkway), then shoot the objects around the bottom of the left walkway; these will cause big explosions. When those men are dead, kill the next few in any order and do not forget the ones on the walkways. This will repeat until two appear on the walkway which is nearest to you. Kill them, then throw a grenade at each doorway at either end of the walkway. This should kill a few people (you will hear screams). If successful, more enemies will appear on the walkways and on the ground level. Enemies will keep appearing until the two bunkers open at the far end and RPG troopers. Do not worry, as only one RPG trooper appears at a time; there are three or four of them. Move back and wait for any last enemies or RPGs fired. Get out the way (or kill the enemies), then slowly go to the doorway until you can see a bunker. Take out your RPG and shoot it until the whole back wall explodes. Use this time to take out the last of the enemies. Watch out, as the RPG troopers will probably still be around, along with flak armored shotgun wielding men. This depends on how close they were to the back wall when it went up. Once everyone is dead and you have destroyed the safe on the walkway, go through one of the destroyed bunkers and complete the game. Sometimes this will not work out correctly and you will have to hide on the walkway (for example, if the door closes) and shoot them as they come. The magnum with as many shots as possible, M249, and multiple grenades are required for this trick. Before you enter the room, crouch down in the archway and use the magnum to try to get as many head shots as possible and blow up explosives. After you are out of ammunition or when there are no any enemies remaining, take out the M249. Reload if needed, then run forward. When the shotgun and shielded enemies come out, keep moving and drop grenades at their feet. When they are cleared, shoot when possible and go up the stairs. Once up there, go into each room. Collect the armor and go into the other room. Once there, crouch down and take out the magnum (if you have ammunition), or use the M249 and wait for the enemies to come after you. After the enemies stop to appear for about two minutes, use the M249 and go down the stairs. There is a machine gun nest at the wall; subdue him and destroy the nest with grenades preferably, and enter it. When you do so, move around the corridor to complete the mission.

The easiest way to kill RPG troopers is to wait until they fire a round (pop out then hides behind something). While they are reloading, shoot at his midsection. If successful, you will shoot and detonate the RPG he is trying to reload, blowing him up.

Select 'options' from the main menu, then choose 'profile' select 'new' and enter the profile name 5SQQ-STHA-ZFFV-7XEV 'be sure to include the dashes. After entering the code you will be prompted to enter another profile name; choose any name you wish and start a new game to begin with the M249.

Beat the level with Normal.

We have no easter eggs for Black yet. If you have any unlockables please submit them.

We have no glitches for Black yet. If you have any unlockables please submit them.

We have no guides or FAQs for Black yet. If you have any unlockables please submit them.

Submit a cheat for Black