Use the above links or scroll down see all to the GameCube cheats we have available for Bloody Roar: Primal Fury. 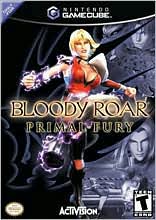 Play as Yugo the wolf and play with knockdown battle and no walls and at the beginning of the fight move the controlor stick towards your opponent and press X at the same time. Your opponent should fly out of the ring if you do this correctly.

Go to stage 7 Aquarium, and enable the code "no walls". Knock someone into the big pit the other player will join them.

Eliminate all walls then select survival and use long or shenlong and use forward throw until level 17 then lose at level 17.

Complete survival mode. NOTE: You Only Have To Complete up to level 16. Once you have beaten that level you can be defeated.

Unlock Through VS Mode

Not only can you finish an arcade multiple times to gain characters and stages, but you can gain new characters by playin in VS mode a couple times. Through that you can get: - Ganesha the Elephant, The Indian Palace Stage and Movie Player - Cronos the Pheonix, The Evil Laboratory and Com Battle Mode

To unlock Uranus, beat arcade mode with every characters.

Beat arcade 15 or 16 times with different characters each time to get the cheats: Beast mode (15 times) and Hyper Beast form(16 times). When you get the cheat select the title cheats then put the cheat beast mode or hyper beast on. That way you will always be a beast. Then go to any fighting mode like arcade or training and select Uriko. At the beginning of the battle go all the way to the left and do your special(the one when she runs to the wall and bounces on to the opponent). If there are close to you hold left to go high during your special and if they are far away hold right to go farther. The beast move will usually do more than half damage. Do her other beast move and keep tapping X rappidly for the whole move then to go faster you can rotate the control stick(the one you use to move with )or in a direction quick like you do with X. don't do her bouncing special or she will commit suicide or a 50/50 chance of knocking them out of the ring.

Unlock "No Walls mode" and play as Wong or Shenlong. Set the game on "One round". When the "Ready?" message appears, run to your opponent and push them as far as you can. Then, press Y (Throw), and he will toss them off and you will get a "Ring out" win.

Every character has the same button combination for Beast Drives. To perform a Beast Drive, you must enter in the following button combination while in Beast form. Note: "Beast" is the Beast button (X is default). First Beast Drive: Press Down, Down/Forward, Forward, Down, Down/Forward, Forward, Beast. Second Beast Drive: Press Down, Down/Back, Back, Down, Down/Back, Back, Beast Press Punch + Kick + Beast to perform your Beast Drive. Instead of performing your beast drive by pressing Down, Down/Right, Right (or the opposite) you can simply rotate the C-stick twice in the direction you wish (each character has two different ones) and it will perform the Beast Drive. For the attacks that transfer electricity through your arm, leg, or body, rotate the C- stick and press Punch, Kick, or Beast. The Beast button does perform an attack -- you must be in Beast for this to work.

Fighting as the following characters will change the end Boss.

Beating the game in Arcade mode a certain number of times will unlock a character or cheat.

Play Arcade mode and do not lose or continue for Four rounds. On the Fifth round you will fight Kohryu. Beat him, finish Arcade mode and this character will now be unlocked.

Press A, B, and X at the same time [may not work first time try doing it many times].

Press the Z or A + X + Y buttons for Hyper Beast Form. You can transform into Hyper Beast Form at any time during the battle. However, if your Beast Gauge is not flashing, this transformation will cost you health. The more your Beast Gauge is full when you transform, the less life you will lose. The following are the benefits of Hyper Beast Form: Time stops. You can shift to another move from any part of a move. Within the time limit, you can perform Beast Drives without reverting to human form. Your life gauge recovers at a faster rate than in beast form. When time runs out and you revert back to human form, the Beast Gauge empties.

We have no unlockables for Bloody Roar: Primal Fury yet. If you have any unlockables please submit them.

We have no easter eggs for Bloody Roar: Primal Fury yet. If you have any unlockables please submit them.

We have no glitches for Bloody Roar: Primal Fury yet. If you have any unlockables please submit them.