Use the above links or scroll down see all to the GameCube cheats we have available for Bomberman Generation. 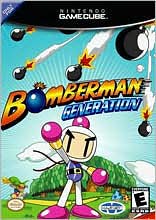 On page 10, the description for the first world says "... to damn up rivers".

On VS. mode switch to items (it's easier if you put only these two items on) make sure that the regular power glove and remote controller are on then get both items on any level except for super blast and throw the remote controller on one of your enemies and press b as quickly as you can after you threw it the enemy will die before he can escape!

Use the following trick to defeat the three- headed bird in Area 5-4. Instead of using Light, Fire, Wind, or Ice Bombs, use large Water Bombs, since fire is weak against water. His attacks are slow so they are easily avoidable. After you defeat him, you will receive a Purple Bomb element.

This trick requires PK Bomber to be enabled. After winning the set number of matches, obtain the Power Glove (icon with the blue glove) from the soccer mini-game. Enter a level where the Bombermen start out on the four corners of the map. When the battle begins use the Power Glove to throw a bomb over the edge of the stage. The bomb will land directly where the other bomber started and most of the time trap them only about five seconds into the map. Note: This trick will not work if there are spaces for the bomber to hide behind or if the bomber stands in place at the start of the stage. allowing the bomb to bounce over his head.

This trick works for any battle game mode. Immediately before the battle game starts, when "Ready" appears, use the C-stick to change the angle of the field. You cannot do this after the game starts.

The Help Of Max

On level 1-6, with the elephant, keep hitting it with bombs, (To hit it, throw a huge bomb in it's path so it'll come to it and hit it) but don't kill it, or you'll miss Max. I don't know if it's time or when your about to die of when he comes but when he does, you won't be able to move. He'll talk a little and then it'll show him. He'll get a huge bomb and throw it at the elephant, taking away one heart away from the elephant and give you one.

To swicth item setup betwen AB all you have to do is beat the game once.

To play as max just get all the gold cards in single player mode.

To play as the gold bomber, win a battle on single team setting. Then you will be gold and shiny.

We have no cheats or codes for Bomberman Generation yet. If you have any unlockables please submit them.

We have no unlockables for Bomberman Generation yet. If you have any unlockables please submit them.

We have no easter eggs for Bomberman Generation yet. If you have any unlockables please submit them.

We have no glitches for Bomberman Generation yet. If you have any unlockables please submit them.

Submit a cheat for Bomberman Generation