Use the above links or scroll down see all to the Xbox cheats we have available for Buffy the Vampire Slayer. 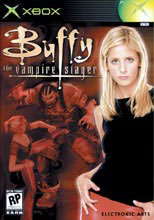 Another Way To Kill Dark Buffy

After you get her health and stamina down you can BURN HER, with the Super Soaker.

When you start after a checkpoint and your life is low, intentionally kill yourself. When you resurrect, you will have double the life you had when you started at the checkpoint.

How To Kill Dark Buffy

When you first get to the Dreamers Realm,Island you will have to get the stone key and insert it, after that continue finding the keys and going through the obstacles. When you put in the last key go through the opening get through the practically invisible wall then turn around, you will see three blocks that are spinning in different ways.Make your way through those until alas, you see a way to get off the blocks.When you get onto the ledge and go through the door you will see another Buffy appear....this is Dark Buffy.Try not to have a weapon that is deadly around her because she will copy your weapon and you can't stake her anyways so what's the point.First, get her stamina all the way down, then go to her and press X and A at the same time.Instead of Buffy throwing her she will head butt her which is the only way to kill her.!!!!

When you get to this level, there is a vamp to kill first then you go down the stairs. Before you go across the bridge, to your right is a box. Break it and grab the elixir in it. Then go across the bridge and talk to Xander. He will tell you about the monster and it will pop up out of the bridge. The way to kill this monster is to keep hitting it in the throat with the reaper. It will kill the monster faster and you will be done with it, you hope.

When you first enter run through the hall and on your left is a broken wall leading to another room, but don't go in there just yet. Keep running down the hall and you will turn left the rest of the way down the stairs. On your left is a door. It doesn't open so don't even try it. On the right hand side, however, is an abnormal looking wall. Kick it down and in it lies your first secret. A holy elixir!

When you make it past the sequence fans, you have to pull the switch in between the fans and open the door. Kill the two vamps that come for you. One of them is killed to save a guy so don't forget to go up to him and talk to him and he will give you a holy vial. After that there is a big hole, but don't jump it you will fall and die. Look over to your right and you will see a skinnier pipe than the others. Jump to it and shimmy across and you will have made a safe way across!

When you first walk in, go down the stairs and to your right. There is a holy water bowl. Fill up your gun, then open the door, battle the monster, and get rid of the phantoms blocking you. Walk through the door and battle the next two dudes. On your right is an open wall with a hellfire vail in it. Then go down the ladder and here is the secret. Go down the stairs on the right then go around the corner to he right and look at the wall. You will see something glowing in the wall. If the vamp comes out first, defeat him then go to the wall, have your reaper out from the vamp(if he came out) and smash the wall where the glowing object is. It will be the only secret in here and it is a holy water vail just for you!

The first thing abviously is to kill all the spiders. Now, when you go down stairs and into the room don't break the tables and chairs, there is nothing in them. Kill the spider that comes from the ventalation shaft. In the next room, DO NOT open the refrigerator because the only thing in it is a spider, but in the bottom cabinet, all the way on the left hand side, is a health crystal. Before you take it there is a spider to kill, after killing it you have to kick the door open to get the crystal. Open the door and save the guy being chased by... you guessed it, a vamp. But don't leave just yet because another vamp is coming for the same guy. Beat that vamp then talk to the man and he will give you a holy water vail. After that go around the corner and turn on the switch to activate the crane, yep... you have to jump onto the crane and ride it across. If that is too hard you can try the boxes, but I wouldn't recommend it because there is a very big chance that you will fall in the water. When you activate the switch run around to the left then up and to the left again. Hit the boards in your way by just running into them, then jump to the the crane and it should take you across. If at first you don't succed try, try again!

Mausoleum, The Catacombs: Sinders And Ashes

In this level you have to battle monsters and icky spiders! When you first walk in and down the stairs, there is an elixer and a hellfire refiller for your gun. When you get to the spiders nest you battle them, then blast the web with the gun Xander gave you. After you torch the web there are two skelotens. Here is where my title kicks in. At the end of the hall is a big bowl. Walk up to it and Buffy will say sinders and ash. Take out your gun(make sure it is full, if not get it refilled)and light the bowl which will open the door on the right hand side.

Pretty much everybody you save will give you an elixer, so save as many people as you can to get a lot of elixers! The all pretty much give you elixers except for the wimpy guy that decides to cry in a corner! Glad I'm not him!

The Girl With The Elixer

Once you go through the door after(hopefully) saving the first girl, there is another girl you must save up the hall. Kill this vamp then go to the girl and press Y. She will talk to you and hand you an elixer. Make sure you say thank you!

After your first mission (which was a dream by the way) you are at sunnydale. You have to go to the door all the way down the hall to the right. If you turn to your left there is a stake and a door. Don't go through the door just yet, there is also a shower go around it and there is another stake. When you open the door there is a vamp. Kill him then go through and try to save the girl from the vamp in the room to your right. After you kill him, there is another shower to your right and in it is a whoop-butt mop!!! Use it to stake your enemies. You mop them with the floor, litterally!

Extra Stake And The Mission Key

When you first start the game you have to go through and obstacle course and battle 2 bad guys. When Giles opens the door for you, you need to go thourgh and open the first to doors. After the 2nd door is a room with hay. Climb up the hay barrels to your left and look to your right. There should be a chair there. Kick it and it will break showing a glowing object. Pick the object up with your Y button, and you have an extra stake then to your right(not down from the loft) is a table with another glowing object on it. That is your mission key that will open all doors. Then just continue to the end!

When you first enter the alley way from previous battles, there is a small are way in ther back right hand corner. Back there you will find a power crystal. At the end of the level take it to Willow and she will give you full strength!! Pretty convienient I would say!

Enable the "Bonus arenas" code. Select any arena, then exit out of it. Load a saved game and begin a game in story mode. Press Start on controller two when a major character is encountered during the game. If more than one major character is encountered in a scene, press Start to scroll through those that are controllable. Controller two can now be used to control that person. Press Back on controller two to stop controlling them. Note: You can also control Bosses.

We have no unlockables for Buffy the Vampire Slayer yet. If you have any unlockables please submit them.

We have no easter eggs for Buffy the Vampire Slayer yet. If you have any unlockables please submit them.

We have no glitches for Buffy the Vampire Slayer yet. If you have any unlockables please submit them.

Submit a cheat for Buffy the Vampire Slayer