Use the above links or scroll down see all to the PlayStation 2 cheats we have available for Bully. 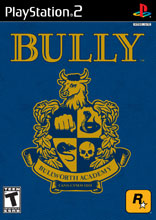 To get adults in trouble, Jimmy must go up to an adult and try to grab him a couple of times (of course, stay as far away from authority as possible and DO NOT HIT THE ADULT). Next, have that adult chase you in front of a cop. Once you do that, stand still so he can throw you down to ground. Then, you will escape from him by pressing triangle a lot. As soon as you escape, a the cop will go after the adult. Watch as the adult gets busted. Take a photo if you like.

To steal sodas, Jimmy must find someone buying a soda from the soda machine. As soon as they put the money in, hit them or throw them out of the way. Next, press triangle to take the soda (NOTE: it will say 'Take Drink' when you are next to the soda machine).

Jimmy is bisexual. Don't believe me; just have Jimmy go up to the following guys below, talk to them, give a bouquet and kiss them (by holding L1 and pressing X). You can kiss either Trent (Bully Clique), Cornelius (Nerds), Gord (Preps), Peanut (Greasers), or Kirby (Jocks). NOTE: you do have to have their respect in order to kiss them.

Where Jimmy Can't Be Busted

Also, areas where it is possible to be busted, by Cop, Citizen, or Prefect, but is not likely, if you are vigilant -------- Inside the Save Warehouse in Blue Skies
On the back balcony at Bullworth School
Inside the Freakshow House

Other places you can avoid being busted, but Authority Figures will throw and hit you with bricks and sap your health ------
Anywhere in the water near the shore On top of any car -- Must first knock out occupant
Now, if you enter your weapons cheats on your 2nd controller (Hold L1 -UP-DOWN-UP-DOWN & Hold L1 -UP-UP-UP-UP), Jimmy will be able to jump up on any of the these places and fire away to his heart's content.

When someone is on the ground, target them, press triangle to get down there, then instantly press circle repeatedly. You can see that before he attacks, you already slightly damaged him.

To curse in English class you have to be on level 2 and spell shit - then watch what he says.

The following is a list of the letters you are given in each English Class and the minimum number of words required within the time limit to pass the class:

Buy all the clothing.

If you want Marbles there are 3 Places to go to find em':
1. Behind the vines that go to the second floor balcony of the school.
2. In front of the abandoned bus where the hobo lives.
3. In back of the comic shop.

When your on a tree with your super slingshot go into scope mode to be able to see every angle so you can shoot people that you won't be able to shoot in first person view.

When your on a tree with your super slingshot go into scope mode to be able to see every angle so you can shoot people that you won't be able to shoot in first person view.

During gameplay on Controller two press and hold L1 and up, up.

Make sure you kiss a girl and get the health bonus before you do Help Gary. Gary is going to make you fight a few of the bully guys so it's going to knock your health down. You should equip your sling shot and go onto scope mode and aiming for one of the guys heads. As soon as the red arrows pop up above their heads, shoot one of the guys in the head and he will instantly be knocked out. The others guys will chase you. Once you beat those guys you will have to find your way through the basement to fight Russel. You might want to kiss another girl before you enter the basement because once you go in you can't come out until you fight Russel.

Spray tags on the billboards, on the tops of the buildings, in the 'Tagging' mission, in order to receive a huge reward. I'm talking over $100.

If you have low or under 50% Popularity with a certain gang, dress like them, the Guys in white shirts are bullies, if you have low popularity with them dress like a punk or a street rat. Same with jocks, dress like a football player or another sport team. For Greasers, all you need is a leather jacket like them. This works for all except the Preppies. This is available after Chapter #1 when you can buy clothes in town. By dressing with the gangs, they won't fight you. Note: This will not help with getting chicks from other gangs.

Pirate Is A Student

When you swim to island where you beat up the pirate, look closely at the pirate. Believe it or not, he is a student. But who? It's Vance of the Greaser clique! He's still in the Halloween spirit. Don't believe me, take his yearbook picture after you beat him up.

After you have knocked someone out shoot them with the bottle rocket launcher and they will have a spaz attack.

A Hint For Easy Swirly's

First, get a guy angry at you and quickly run to the bathroom. (He'll start chasing after you.) Then when you get to the bathroom with the guy, go up to him and press triangle to grab him. Then bring him to the toilet, and give him a swirly. That's a hint for easy swirly's. You can do that to any guy as long as you want.

If you want Jimmy Hopkins witness a cat fight, here's what you do. First, you make-out with one girl. Next, you have her follow Jimmy to another girl and make-out with the second girl. Once you have done that, sit back and watch the cat fight. (Note: you can only witness this on school grounds, and the girls must like you.)

To do this, you must knock out someone (it does not matter who) and then get out your marbles. Last, you just through the bag onto the person's gut. Note: The bag will not open at first. It takes awhile.

The radio transistors are always near the orange and white warning cones with the blinking orange light on the top.

If you didn't get all of the tombstones on "Halloween" don't worry there in the warehouse that the mission "Preppies Vandalized" took place.

Go-cart Next To Bike Stop

When you pass all go-cart races in the carnival pass all street races and get go-cart next to bike stop.

Taking The Fire Extinguisher Outside

After you give the hobo the last radio transistor he will get abducted by a UFO!

In Go-Kart Races (3,4,and 5) at the carnival, there is a shortcut. When you come to the turn where you have to power slide, instead go across the small strip of land to gain more time.

First go to the yum yum market. Go to soda's and buy 100. It's easier than going to a soda machine because you don't have to wait for jimmy to drink the soda. After you do that something should pop-up and say secret unlock "free soda". Now that you have free soda go out of the store and go back in because there is only 100 in stock. Now you have free soda's so get 500 soda's and you get the two-can hat. It is a hat with 1 can on the right and 1 can on the left and a tube going into jimmy's mouth. It's pretty cool.

Go to the basketball court anytime after 4:00 p.m. to play the "Penalty Shot" mini-game. Bet the maximum of $20.00. Go up to the line, then press Circle to jump. Press X to throw while in mid-jump for easy knockdowns.

Go to the Principle's office and taunt the secretary. When she starts to chase you, just run around the desk and continue taunting her (while locked on with L1) for as long as desired. If she grabs you, just tap Triangle (10), or if she is not already irritated, you can just keep apologizing, which also helps your stats. This works for almost all staff -- just run and taunt.

To get a lot of photos in the Yearbook, go to either dormitory, pull the fire alarm, stand by and press Up, then start snapping them as they run by.

Saving Others From Beatings

To save someone from a beating, grab the attacker (s) by pressing Triangle and throw them far away from the victim -- so they will focus on you, and you will not accidentally hit the victim.

Beat up the pirate on the island near the beach house.

Successfully complete all the detention mini-games.

Destroy all 27 pumpkins around the school and inside the main building during the "Halloween" event.

Find the preppie with a blue mission on the beach at the beach house and beat his swimming time.

Smash all the garden gnomes.

Successfully complete the "The Candidate" mission to unlock the "Halloween" mission.

Successfully complete the Boxing Challenge or Prep Challenge in Chapter 2.

Finish in first place in the Kart Race at the Carnival.

Turn on all the showers in the boy's locker room in the gym.

During the gameplay hold L1 and press Up(4)

While playing, hold L1 and press Up, Down, Up, Down on controller two.

While playing, hold L1 and press R2(3) on controller two.

Pass the save Bucky Misson to get the skateboard in inventory.

When you collect all 75 rubberbands, you will have the rubberband ball in your weapon wheel!

To get colored photos, you have to complete 4 photography classes and you can take colored pictures instead of getting black and white photos.

To unlock the incognito suit you have to do the errand for the cop.

When you complete all bicycle races the school race will open.

Give a homeless guy some spare change in bullworth.

To unlock a Bike Helmet, Do the Bike Challenge 1 and win the race, you then unlock the bike helmet which if you ware it, you can steal a moped from someone and legally ride it without worrying about getting busted for not having one.

Complete the mission Hattrick vs Galloway.

First you must be able to go out of the school. Go to the carnival and go to the go-cart races. After you win 5 races (don't have to be in a row) you unlock go-cart street races. Go around and do the street races. After you've done street race 1,2,and 3 you unlock the go-cart. There is on bad thing though and it is you can only get it at the garage at the school. And it's not in the garage it next to it. It also explains that after you unlock it. This is a fast and sweet go-cart. (It changes it's color everytime you get a new one)

We have no easter eggs for Bully yet. If you have any unlockables please submit them.

We have no glitches for Bully yet. If you have any unlockables please submit them.

Update - Where Jimmy Can't Be Busted

Submit a cheat for Bully