Use the above links or scroll down see all to the Xbox 360 cheats we have available for Call of Duty 3. 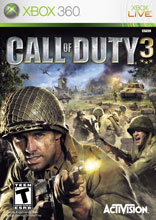 When you here the signal while on the bridge,start running, stay behind the tank. The blocked area where you need to go needs to be cleared, through a grenade instead of gapping bullets. After that, it's smooth sailing to the next check point.

Jump With The Bazooka

If you shoot downward with the bazooka while jumping, you will propel yourself to higher places. If you have your team killed off, your teamates can use their bazookas to shoot you to higher places. Timing is important. You can reach many places that are otherwise out of range.

When being shot at by and enemy and near a room or wall, run and jump and hold B. You should dive head first into the room or wall and escape.

Hold the back button and press left, right, up, left, down, start. (Possible fake code)...

Complete a mission without dying or using checkpoints.

For perseverance despite grievous injuries

Complete the basic training in the beginning of Saint Lo .

Complete the single-player campaign on any difficulty setting

Avoid getting hit more than 30 times during a mission.

Complete a mission using less than 300 rounds of ammunition.

Complete a mission without firing a round. Player can make use of melee attacks and hand grenades.

Revive 10 of your team-mates in a ranked match without getting a team-kill - multiplayer points.

Capture the final objective in the game mode War. Must be a ranked match - multiplayer points.

Be the player with the highest score and on the winning team in a ranked match - multiplayer points.

Go Beyond The Map, And Play As A Rock

In the Merville level, get in a jeep and drive it across the river and park it in a slanted position in the north west corner of the map. Get out of the driver's seat and you will be able to go beyond the map's border. As you look south there will be a rock, to get in the rock you need to run and jump. In the rock you will be able to kill people without them seeing you, but you can only kill people in that area. Be careful and do not walk into the big space ahead of you because you will have to respawn.

To unlock the Hot Potato Achievement, throw your own gernades to the ground, then pick them up, and throw them at the enemy.

We have no easter eggs for Call of Duty 3 yet. If you have any unlockables please submit them.

Go on mulitplayer and chose split screen. Make teams and chose Ender Dam as the map. If you are the allies you should spawn near the big dam. Next, go to the bridge. Go to the house that has the truck, 3 person truck that you can drive in, and go to the side. There should be a motorcycle on the side of the house. Next, get in the bike and go strait back, don't move the wheel at all! Then get out of the bike when it is on the hiil and you should go through the wall and presto your under the map.

We have no achievements or trophies for Call of Duty 3 yet. If you have any unlockables please submit them.

Submit a cheat for Call of Duty 3