Use the above links or scroll down see all to the PlayStation 3 cheats we have available for Call of Duty 4: Modern Warfare. 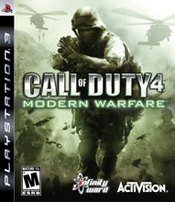 When your teammates open a metal door, the intel is up on the second floor.

This spot can only be reached when you are playing the old school free-for-all section. Go to the building at the very end of the map on the opposite side of the bus. You can get to the very top of the building that is around the corner. First, get to the second story where the chair is found. Get on the top of the chair facing the wall, and jump. You may have to run and jump, but eventually you will catch an edge. You can then work your way up to a great sniping position.

Easy Intel Pieces In All Ghillied Up Mission

Once you get the overkill perk. (lets you carry 2 weapons at once) equip the R700 sniper in primary spot and the M14 assault rifle. You will have 52 bullets for the sniper and about 2 extra clips with the M14.

Easy Completion For All Ghilied Up

After you put down your captain and set out the claymores he tells you to find a good sniper position and go prone. About 20 feet to the northeast of the captain is a ticket booth that you can hide in until the helicopter comes. Go into it and go prone underneath the table. Here you will be protected from the grenades and if one comes right outside the door you will still be protected.

To do this, simply have Steady Aim and Bandolier. (Obviously you don't hold down for the scope) If you are a good aim, choose the R700 over the M20A3. Both are pretty much the same, but the R700 is slower but a lot more deadly, with more accuracy. If you have it, an ACOG SCOPE IS HIGHLY RECOMMENDED! The ACOG makes your likeliness of aiming down the scope about 25% less. The range is slightly reduced, but hey, you wanna argue with the slow-moving you? I thought not. To shoot it, look VERY CLOSELY AT THE CROSSHAIR. AIMING DOWN THE SIGHT FOR LONG DISTANCE STILL ENEMIES IS SLIGHTLY RECOMMENDED. Just pause for a few moments to make the enemy think your either cheating or a pro. But, there is a catch for this, though. Your a little more likely to miss. The ACOG takes a hair stand of your accuracy away. That still makes a big difference. If your still stumped, use the Hardcore Search and Destroy method - sneak up close and shoot em' in the head.

In multiplayer mode, if you have the last stand perk, try picking up different weapons. I you go into last stand mode while switching an equipped weapon for one on the ground, you will use the weapon u were swapping for instead of your sidearm, but be careful when swapping out your pistol for one, if you don't have a pistol on you, you'll use your spare M9.

In grassy areas, in a team battle switch to the FIRST SNIPER. (quick and powerful but slow slow reload) crouch or lie in grass. You are virtually invisible

Equip yourself with a M16, last color, with a silencer. The silencer makes you invisible on the map. Sneak up on any enemy opponent in multiplayer and FIRE on the head. (SNIPING ENEMIES ARE EASIER) You gain 10 points and 1/25 headshots for the M16 Marksmen challenge.

On pipeline go to the back of the trains. There is a ladder climb up the ladder and you can snipe from there.

Place a claymore at a 45 degree angle by entrance of a building you will have more of a chance of killing them.

Straight across from the 12th intel, look for a building with a big hole in it and the intel is up in there on a dresser.

When your tank reaches the corner by the bus, turn left into this bluish room where clothes are and the intel is up somewhere on the second floor.

The Hunted: After going through two greenhouses, there will be a ruined house, go in it but the intel is near 2 picnic tables.

The Hunted: After being flash banged by Gaz, look for a soda machine an the intel is on a table.

Ok this one is still on the bog. Now listen closely they are behind boxes. After you go through the fence, turn left and another left and look for a white refrigerator.

Act I; The Bog: After you hit the enemy flank with their machine guns, it's one door down the hall.

Where you usually go sniping, there is an RPG up there, head STRAIGHT right. (CHARLIE DON'T SURF)

Act I; Charlie Don't Surf: When you find a really long table, head left in the doorway; don't go right!!!

Once you find the informant in a building on the top floor, search around for the intel on that floor in a bathroom by a toilet (bathroom is big) (BLACKOUT)

Act I; blackout: When you kill two men in the first guard post, next to the TV is the intel.

Ever want to complete the level but you have ALL the intel on the level? Well, as soon as you collect your intel pieces on a level, just save and quit. This way you can go back in the game and finish the level later.

The second Intel is still on the PROLOGUE. When you get near the 'package' while walking down stairs turn to your left.

Once you get the Red Dot Scope add-on to your weapons, use it over the ACOG scope. The red dot will not enhance or take away anything and provides a better aim point on most weapons. The ACOG scope will actually add more range to your weapon, but take away accuracy which accomplishes almost nothing, especially for snipers because it takes away range and adds nothing.

If a target is moving, make sure to lead it. If you are not making shots, try to lead your target more. Also, if you are a skilled sniper, try using the M40A3 over the M21. It has a slower reload time and rate of fire, but it has enough damage to kill a target in one shot instead of two or three. It also allows you to be less noticeable with less rounds being fired so someone else cannot follow the tracer shot back to you. A good setup for the sniper is the Claymore Perk to alert you when an enemy is trying to close in on your rear, and either the Sleight Of Hand or Stopping Power, then Iron Lungs to give you more time to line up your shots.

At level 38 in Multiplayer mode, you get the Overkill Perk Class 2 (located in the Perk 2 or Red Perks). This allows you to carry two primary weapons rather than a pistol. Some of the guns in online play can share ammunition. If you are a skilled sniper and prefer the bolt action to a semi-auto sniper, you can share ammo between the R700 (unlocked at level 34) and the G3 assault rifle (unlocked at level 25). Instead of having 40 rounds, you will have 152 rounds for the sniper, effectively giving you an endless supply of ammo for the R700. If you are a G3 user, you will gain an extra 40 rounds (two clips). This works both ways; since you share ammunition, you might not want to use too much ammo with the G3. Also, there are more combinations than just this one; experiment with different guns to see which ones can share ammo. When you reach level 46, you will get the M14 Assault Rifle. In the class that you want to have the extra ammunition, you will need the M14 Assault Rifle and M21 Sniper Rifle as weapons. To use those two weapons, you must have Overkill (obtained at level 38) and your second Perk on Overkill. For the other two Perks, you can have whatever desired.

Dog Attack In All Ghillied Up Mission

In the "All Ghillied Up" mission, you will come across a wild dog eating a dead soldier's remains. You will be told to leave it alone, but if you want a very difficult challenge in the game, shoot it. You will be attacked by a large pack of angry dogs.

The Intel Pieces can be found in the following levels. There are a total of thirty Intel Pieces.

If you play Call of Duty 4 on the hardest mode, then you'll be able to play different levels on the story mode. (but not every level is different)

One Shot One Kill

To activate this cheat, you must have completed all of the campaign missions on any difficulty level and gathered at least 10 pieces of enemy intel. While playing, hit START, go to OPTIONS, and select CHEATS. Go down to Cluster Bombs and hit X. With this on, when you throw Frag Grenades, the Grenade will explode like normal, and then have around 5 more explosions after wards, so keep away until after the explosions stop. This is a good cheat for drawing your enemy out of a room or killing large numbers.

Reach level 55 to unlock Prestige mode. This is a multiplayer only mode that starts you back at level 1. You can repeat this ten more times.

When you beat the game, go to mission select then you'll see Epilogue. There is a level that was never playable in the campaign called Mile High Club.

Successfully complete Story mode on any difficulty setting and watch the entire credits to unlock the bonus Epilogue mission.

Successfully complete the game on any difficulty setting to unlock the cheat menu and Arcade mode. The cheat menu can be found at the options menu while playing the game.

Collect 10 pieces of enemy intel to unlock this. It changes the normal colors into their negative form such as white to black and black to white.

Collect 5 pieces of enemy intel to unlock this. It makes the screen go gray for a classic feel to warfare.

Collect 10 pieces of enemy intel to unlock this. Gives you the feeling of a silent movie during gameplay.

Collect 30 pieces of enemy intel throughout the entire game.

We have no easter eggs for Call of Duty 4: Modern Warfare yet. If you have any unlockables please submit them.

We have no glitches for Call of Duty 4: Modern Warfare yet. If you have any unlockables please submit them.

We have no achievements or trophies for Call of Duty 4: Modern Warfare yet. If you have any unlockables please submit them.

Submit a cheat for Call of Duty 4: Modern Warfare