Use the above links or scroll down see all to the PlayStation 3 cheats we have available for Call of Duty: Modern Warfare 3. 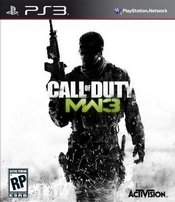 There are many secret killstreaks: (Kills have to be in a row)
? Unknown name? -9 Kills (Knife only): Temporarily disables enemy guns leaving them with knives.
Longcopter-17 Kills (Sniper only): Be the sniper of a heavily armored attack helicopter.
M. O . A . B- 24 Kills: Wipes all enemies off of the map and disables enemy equipment.
CT-75- 32 Kills: Ride on a Pave Low while controlling 5 Predator Missiles.
Team 480- 48 Kills: Call in 3 attack helicopters and a Riot Team (4 Members).

Once you hit level 20, use the Specialist package.
Make a class, give it hardline and use the Specialist package. It not only gives you extra points at kills 1, 3, 5, and 7 but also helps you complete the perk's challenges AND the Specialist Challenges for each perk.
You are completing the perks and each perk has a Specialist perk challenge to it. For example, if at 1 kill you unlock Assassin, you are completing Assassin Challenges while also completing the Specialist Challenge entitled 'Assassin.'
This equates to a boatload of XP once you start moving through these challenges. Not to mention the 200 XP per kill at kills 1, 3, 5, and 7 every time. You will be hard pressed to find a faster way to gain XP while playing any kill heavy mode.
You get EXTRA points for kills 8, 9, 10 etc. as long as you have all the perks on and have not died so it's like double XP in on itself.

If you sprint toward an enemy and quickly tap the knife button, you will stab instead of slash.

Out Of Map For Resistance

First of all, go to the main garden and have 2 people with you (both with a riot shield) then put his back towards the building and you facing him and a tree on top of the bricks. Then run and hit him with your riot shield and you'll shoot up on top of the building then run around until you find a spot to hop down and you are out.

If you shoot somone in the shoulder with a desert eagle, sniper rifle, or a shotgun. They get launched into a flip.

The S4 is the russian's version of the C4. It is very effective. It does 2x the amount of damage (3x if you have 35+ kills. ) It also temporarily blinds and slows all enemies within 25 ft. From it. To get the S4, you first have to have a class with 2 flash or concussion grenades and one C4. Then, throw both flash/con grenades and make sure they both affect someone. Without dying, you can now throw your C4 which is now an S4. You will unlock the achievement "Explosions in Russia" and get the trophy "Power Blast".

Floating On The Level Lockdown

To float on the level lockdown, you have to go to the orange lift and you'll find 2 taxis out from the lift. Climb the taxis and get on the one turned on it's side. Wait a little bit so your jump will but strong then jump and tap the jump button as fast as you can. Then go and climb the lift till you get in the basket. To get in the basket you have to move alittle and or you can go to the back of the basket but wait ti your jump is strong and then you'll see a sign and then jump and you'll land on the sign and when you look down you'll be floating in mid air.

Get on the spectator and then go to the boat docks. Then head east and keep going until you go to the end of the map and there will be a giant hole in the ocean.

For this glitch you have to go to down turn. Find the room with a lot of money in it. Go out side of that room, you will find to trucks go on the right one. Go a little forward then left. You see an edge on the building to the right. Sprint toward the edge and jump at last second. You are now on the edge go to the very back. A bigger post is now there. Get on the very tiny edge left of it and jump to the other side of the large post.

This glich works on any map. First you will need $7000 and you will need two guns mp5 and model 1887. From the first 5 waves. Go to the laptop with the pistol on it. Then the best gun that are cheap is the sub machine guns they are $1500 on the d pad of the ps3 press the down pad fast and the x button fast like 4 times and you should get 3 guns. Notice you that to have a lot of money.

After Price kills Mollobie and finds out about volk, you can still knife him and blood will appear, unlike other dead bodies.

If you have mw3 online for ps3 go to akaden in private match switch teams to spectater then go to the real end of the map look down you will see a orange big ball and a blue little ball in front of that turn around you will see a poster of cars on a road way.

When typing in your name, press shift and ^ and then a number. It will delete the symbol you just wrote, and change the color of your username. The colors are:

These perks operate in addition to the standard 3 assigned to the custom load out chosen at the beginning of a match.

We have no easter eggs for Call of Duty: Modern Warfare 3 yet. If you have any unlockables please submit them.

We have no glitches for Call of Duty: Modern Warfare 3 yet. If you have any unlockables please submit them.

Submit a cheat for Call of Duty: Modern Warfare 3