Use the above links or scroll down see all to the Nintendo DS cheats we have available for Castlevania: Portrait of Ruin. 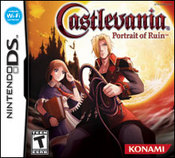 At the main menu, hold L and press A.

Watch Brauner's hands when he paints-they'll reveal the shape of the scribbles he'll paint across the screen, allowing you to find a safe spot. Jonathan should use his axe to attack Brauner while the boss is in a painting, and Charlotte should use the Tempest spell to make a wall of wind that will both damage Brauner and protect you from many of his attacks.

Fight this one solo with Jonathan, swinging at Medusa with the Great Axe (its arc will allow you to hit it from the ground) until the coils appear along the floor. Position yourself safely between two loops near Medusa's head, and throw axes, which will strike it up to three times a piece.

There aren't many fancy tricks you can use against the Werewolf, so focus on double-teaming him and beating him as quickly as possible. Use your most-damaging subweapon so you can attack from a safe distance, and keep the Meteor Dual Crush handy for when you're cornered. Exploit the Werewolf's vulnerability to holy attacks by using Piercing Beam as Charlotte's main attack spell. It deals heavy damage and hits multiple times when fully charged.

Use Charlotte's Dark Rift spell to suck all of The Creature's projectile attacks into another dimension, giving your team the advantage of having to dodge only its physical attacks. Equip Jonathan with a heavy weapon with a wide arc that can hit The Creature twice per swing.

It takes a nimble hand to dodge Mummy Man's attacks while leaping over the boss chamber's moving blocks. Al-controlled characters lack the necessary grace, so keep Charlotte on the bench. Exploit Mummy Man's weaknesses by using Jonathan's Flame Whip, and have Charlotte cast Raging Fire with the R Button. Keep some MP open so you can use Meteor to escape from tight spots.

To see the game's bad ending, you'll need to slay both Stella & Loretta. To beat them as a team, stay close (where they have trouble hitting you) and take great care to avoid Loretta's ice sword. For a safer win, battle with Charlotte alone, use the Dark Rift spell, and slide back and forth beneath the rift to block their attacks while sapping Loretta's health.

You'll neede to use both characters to slay Death, but you should alternate between them instead of using both at once. Begin with Charlotte, and attack with spells like Ice Needle and Spirit of Light that can be cast from outside of Death's web of chains. When Death turns from purple to grey, switch to Jonathan- the grey form is resitant to magic but much weaker to physical attacks. Jonathan should wait for safe openings to strike with a weapon, and use subweapons like the Axe and the Bible when it's too dangerous to get close. Death has two moves that can send a character from full health to the brink of death within seconds. If you're caught in the path of its spinning scythe attack, use a Dual Crush or the Stonewall skill to avoid taking continous damage. If he grabs you with one of the hands at the end of the chains, summon your partner and have them cut you free before Death can swing his scythe.

Dagon's only weak spot is the head on its tail, so you'll want to use a long weapon like a spear to reach it. Axes work nicely as subweapons, but save some MP for Charlotte's Dark Rift spell, which will protect you from Dagon's water beam by sucking it into another dimension. If you can't afford to buy the Dark Rift spell, you can send Charlotte away and have Jonathan use the Stonewall skill to reduce damage you suffer. You can also avoid the beam by jumping along the water surface.

Double-team Stella and pick away at her 2,500 HP with midair strikes and subweapons like the Bible, or go solo with Charlotte and focus on dodging her attacks and retaliating with fully charged Gale Force spells. Use your new double jump to leap over her ground-skimming energy waves. When you can't dodge an incoming attack, use the Volcano Dual Crush to protect your team. Save it for when Stella is nearby and toward the bottom of the screen so she'll take the most damage.

Astarte's devasting "temptation" move will possess Jonathan and turn him against Charlotte. The bast defense is to fight solo with Charlotte; with the Clear Skies spell to protect her and the 1,000 Blades Dual Crush to deal heavy damage.

Dullahan can use his best attacks only when his head rejoins his body, so your goal is to ensure that never happens. While your computor controlled partner strikes at the body for damage, have your other character focus on knocking the floating head away.

Have Jonathan strike at Behemoth with a weapon that swings in an arc (like the mace) which will ensure you get multiple hits with each swing. Target Behemoth's head with melee weapons and the occasional throwing axe, but save most of your MP for the Holy Lightning Dual Crash.

You'll need to slash through a shell of bodies to reach Legion's gooey center - have Jonathan attack from the ledge while Charlotte casts Rock Riot repeatedly from beneath it. When the center is exposed, attack with Rock Riots and hand axes from between Legion's lasers. When the ledge beside Legion is safely between two lasers, jump on it and nail Legion's core with the 1,000 Blades Dual Crush.

We have no cheats or codes for Castlevania: Portrait of Ruin yet. If you have any unlockables please submit them.

How To Unlock Axe Armor

To unlock axe armor armor beat a thousand enemies, save, and start over. Axe armor should be an option if you have killed enough enemies.

We have no easter eggs for Castlevania: Portrait of Ruin yet. If you have any unlockables please submit them.

We have no glitches for Castlevania: Portrait of Ruin yet. If you have any unlockables please submit them.

Submit a cheat for Castlevania: Portrait of Ruin