Get the latest Champions of Norrath: Realms of Everquest cheats, codes, unlockables, hints, Easter eggs, glitches, tips, tricks, hacks, downloads, hints, guides, FAQs, walkthroughs, and more for PlayStation 2 (PS2). CheatCodes.com has all you need to win every game you play!

Use the above links or scroll down see all to the PlayStation 2 cheats we have available for Champions of Norrath: Realms of Everquest. 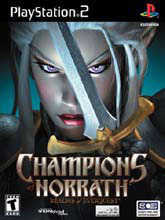 Note: You must already be able to play at Champion level. Take your Champion level character and fight your way through Kelethin, then through the alleyway of Lesser Faydark leaving nothing but the Goblin Boss guarding the dungeon beyond the two trees. Make sure to kill the two Dire Badgers as well. Save the game. Then, start an Adventurous level game with a new character that you wish to jump 41 levels. Do not kill anything with this new character. Bring him or her to the shop, then import the Champion and give your new character the best first level items available, and have them sell everything for gold. Make sure to import a character with Stones that can give weapons extra damage, and if you buy a bow get one with as many open holes as possible. Provide the new character with plenty of projectiles. If it is a class that cannot use a bow, then give him or her lots of mana. Export the Champion, then save the game in another slot. Load the Champion level game, then import the new character replacing the Champion. Remember to illuminate all foes with the exception of the Goblin Boss, who guards the dungeon beyond the two trees. Approach him with caution. As you do you will see a small semi-enclosed space off to the right. There is a fire burning and a way in on ether side of it. Get the Boss' attention, then immediately flee to that same enclosed area. You can fit, but he cannot. From there, shoot at him until he has been killed. Your character will go from level 1 to 42, without suffering any loss to currency, and will have all the points he or she would have received if the game was played through normally. Note: If you run out of arrows or mana, gate back and pick up some more. The Goblin Boss will be in the same place and same condition.

Press X rapidly to create your guy hitting and stepping.

You need souls to weaken the Barrier of Hate. In order to do so you have to go the place of cauldrons or whatever. When you enter the souls are like ghosts. Guide them through The Halls of Despair. Stay in front of them so they don't die, of they do die you have to restart this mission thing. You have to do this 2 times.

How To Kill Inuruuks Pet Thing

When you fight him he will shoot stuff at you. Run between the rocks but don't get too close. Shoot him or attack him with melee. Keep repeating this and he will eventually die.

This is the final boss. The god of hatred. He is really hard. IF you unlock the skeleton friend, you summon a skeleton, it is helpful. Stay away from Inuruuk and wait until he shots fireballs at you. Then either shoot him with arrows or spears or go up and attack him. Note: If you attack him with a Meele weapon, every few times you attack rune away from him.

Killing The Big Trojans An The Cloud Place

These guys are big and can hit hard. They stomp the ground and it hurts you. Go up to one and either range or use magic on him. When he comes to get you run away and keep doing this.

Attack Of The Clones!

When you're in the second part of the game, in that forest area, there's a lot of places to go down in the actual forest. If you stand by any of the edges that are supposed to keep you from falling, and you keeping running, like you wanna fall off, you'll eventually see a clone of yourself running on the steps that kinda looks like a holagram. There's no point, it's just fun to do.

Start a game with two controllers. Press Start and select "Add/Remove Player". Select the slot for player two at the import screen then import the current character you are playing into the player two slot. Select "Finish" and player two will now be a duplicate of your original character, with the same armor, weapons, and items. Sell the duplicated inventory items for money, then repeat.

As soon as the battle starts, run to the side of the chamber that has a pillar that you can run around. Wait there and kill all of the smaller ants that attack. After all the small ants are gone, lure the ant-queen around the pillar until she gets stuck. Use magic attacks while shes in the air, then use melee attacks once she lands. Use poison spells to help you when she's one the ground.

Start a game and get your character to a high enough level and get him a lot of stuff. Then, go to the import character screen, and import your own character as many times as you can. Have him drop all his stuff, then pick up everything and sell it. When you're done, delete the other you. You can do this as many times as you want.

Get To Level 20 Instantly!

We have no unlockables for Champions of Norrath: Realms of Everquest yet. If you have any unlockables please submit them.

We have no easter eggs for Champions of Norrath: Realms of Everquest yet. If you have any unlockables please submit them.

If you get to blackdelve reach kill all the mamoth ants and go into the ant hill and the holes that the ants come out of the skeleton can go into but sadly you yourself can't go in NOTE: you must dark elf shadow knight tested and works.

We have no guides or FAQs for Champions of Norrath: Realms of Everquest yet. If you have any unlockables please submit them.

Submit a cheat for Champions of Norrath: Realms of Everquest