Use the above links or scroll down see all to the PlayStation 2 cheats we have available for Champions: Return to Arms. 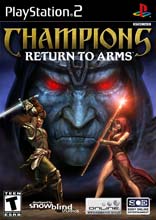 First gain 3 to 4 levels with out spending the points. Second make sure you have unlocked the plane of war medallion round go to the four horse men there you can distribute the points as you wish let the first horse man kill you then press X to try again. Press select and keep getting points its unlimited!

Unlock Sword In The Stone

Beat a series of 5 bosses in the last bonus round (the Bloodstone one). You need all 11 Bloodstones to get into the extra area in that last bonus round. Once you defeat the last boss (Innoruuk), you'll "feel like a champion." Now you can go back and draw the sword from the stone. While the sword has a level minimum of 33, you don't have to be any particular level to draw it out.

There's a way to get unlimited Attribute Points in this game. First, you have to beat the Plane of War. If you grow any levels in the Plane (which you will), do not spend the attribute points that go into strength, intelligence, dexterity or stamina. Instead, keep them for after you beat the Plane. After the Plane, go to the Medal Round, and as soon as you can hit select and go to spend the points you've earned. You can put them in, then leave, come back, and your stats will be higher without having actually spent your points. You can repeat as much as you want, but it will only work for strength, intelligence, dexterity and stamina.

Below is a list of some of the Bloodstones in the game, and how to find them.

You can duplicate any number of items and give them to a character just starting out in the campaign. To do this, you must first have a saved game file that has the character with the item that you want to duplicate. Start a new game with up to four characters and import the character with the item desired to be duplicated into each of the characters (up to four). Give all of the items to be duplicated to one of them and save the game. Then, create a new game and repeat the same procedure; but this time use the character from the newest saved game which should have multiple items already. Note: To save memory card space, just keep saving over the duplicating file. Continue doing this until the number of items duplicated is reached. Start a new game creating the character you want for the mission, then import the character that has been duplicated and give the items to the character that is actually being created for a game. Finally, create a new game and import the character that you created and then gave the duplicated items to in order to start the game with whatever items desired. Note: This can also be done to generate more money by selling the duplicated items instead of keeping them with the character that was created for the new game. This trick requires at least two controllers and enough space on your memory card for two files (about 800K). Go to "Create Game" under the adventurous level, and choose how many players you want. For example, if you have four controllers, choose four players. When you get to the player selection screen, import the character who has the items to be duplicated to every player and start the game. You will now have copies of your character. Have all but one of your extra characters drop the desired items. Then, pick them up with your primary character (that did not drop the items) and save the game. Then, exit the game and go to the main menu. Start a new game on any difficulty setting. At the character import/selection screen, and import the character that picked up the dropped items. You have now duplicated those items. This trick requires all eleven Bloodstones. Having a keyboard or microphone is also desired, so that you can tell other players what you are doing so that they will not pick up what you drop. When you get to the end of the Bloodstone Passage, the game auto-saves. Do not go in yet. Enter your inventory and drop a few items, such as eight Perfect Bears or some gems. Go into the Twisted Nightmare and intentionally die. The items will remain on the floor where you left them and you still have the bears that you had before you dropped them, because the game saved when you had them. Drop eight more, go in, and die. There should be sixteen on the floor. Be on the safe side, and do not drop all twenty five items. If you pick up the items then die, you will lose out -- the game does not save again after that first save. Do this two times and exit the mission, just for caution.

This hint should only be used if you can kill the final boss. After you have killed him press pause and click end mission. Then when it takes you to the menu where you select which plain to go to select The plane of Nightmares. When the enter the plane end the mission really quick in the start menu then go back to the plane of fear/tranquility. Then just kill the boss again. Doing this will level you up quickly and sometimes the main boss will drop rare items.

Beat The Robot Boss Much Easier!

First you have to get 2 players. Then make sure you have arrows, throwing knives, etc. Have one player use his shield in front of you and just shoot. I suggest the scout or tiger because they can keep makeing arrows and throwing axes. Make sure you kill the small guys.

Whenever you're about to fight a powerful boss, or just a guy you can't beat, use a gate scroll. Go back and buy maybe 10 more gate scrolls. Now gate back to the fight. Do as much damage as you can without dying, then just before your last bit of health is gone, gate scroll again. Don't press select and square because that gives the enemy time to kill you. Press start and use it. You can go back to the Plane of Fear or wherever your safety area is and get healed up, then go back to the fight and have the damage you did before still there on the enemy. I have used it to be the boss in the Plane of Torment, Arachna Caves, and in the Plane of Fire.

If you have a strong character on a one player file and want to play with friends, the best thing to do is start a new file. When you are choosing your character, choose import instead. Choose the strong character that you want. It will then copy the character, weapons, money, and stats, plus it will go to the place in the game where the furthest character has been. So now you have two of that same strong character. This is also good for duplicating items.

We have no cheats or codes for Champions: Return to Arms yet. If you have any unlockables please submit them.

We have no unlockables for Champions: Return to Arms yet. If you have any unlockables please submit them.

We have no easter eggs for Champions: Return to Arms yet. If you have any unlockables please submit them.

After completing the second mission (I did this glitch following Firiona Vie) go to the third sub- mission. It has the gambling room. As you enter you will gain 20000. Every time you go to the loading screen and back you will earn another 20000. When you are satisfied walk out and enjoy the game.

We have no guides or FAQs for Champions: Return to Arms yet. If you have any unlockables please submit them.

Submit a cheat for Champions: Return to Arms