Use the above links or scroll down see all to the PlayStation 2 cheats we have available for Chaos Legion. 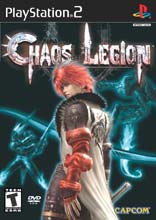 This is by far the game's best Legion, yet the most underdeveloped. For example, it teleports to your opponent's blind spot and basically mutilates it. When you use its unsummoned special attack, you can move through a plane of slower time. There is only one legionnaire in this crest. Also, you cannot rely on this Legion to protect. It has a reaction time, and when it attacks it leaves you very vulnerable to your foes. Note: To get the Ultimate Legion, collect all the Thantos Chips.

In level 9 you get to use Arcia. This is basically just a fun level because you get to shoot enemies. Check what happens when you use the dodge technique with Arcia (hold R1 and press X when you move in any direction) This is useful for not getting hit, and you can shoot while performing these moves.

If you want a longer combo try jumping into the air once. When coming down, you will hit your enemy once and when you hit the ground you will start your regular combo. It is still slightly longer.

Jump and attack so that you can do a spin slash at its head. That will immobilize it. Keep doing this.

You will eventually encounter gates with huge metal boxes behind them. Notice that you can lock on to these gates and even attack them, but it does not really do anything. That is because you need to use a Legion's attack to open it. To see which Legion you should use, check the little circle in the gate, and make sure it matches your Legion's symbol.

On stage 6, there is a Thantos Chip on the far right side on the beginning. However, you have to defeat the red monster layer. Once you do that the Thantos chip will appear.

Find a safe location where the lasers shot by his minions will not hit you. Then, stand there and time the lasers with your Legions and your own attacks so that no health is lost. Make sure you have the Guilty Legion and the Arrogance Legion equipped for this Boss. When you first get to the Boss, summon Arrogance to protect you. As they absorb the blasts of the cannons, have them return the attack of the cannons for experience. When a couple of cannons are remaining, dismiss the Arrogance Legion. Run to the tree and attack it until it opens up. Then, summon the Guilty Legion. Note: The amount of cannons respawned will increase as the tree gets more damaged -- be careful. First, equip the Arogance and Blasphemy Legions. When you get to the Boss, attack it until a blue thing on the tree appears. Attack it with two combos, then when it starts to come down quickly use Arrogance's Triangle move and you will not take damage. When you get it into yellow HP bar, destroy the little energy beam things so that they will not get in your way. Also look out for the vine whips. Once you defeat the Boss, you will receive the Flawed Legion.

In the cave, have no Legions active so that you can run around. Run up to the Boss and attack its right leg repeatedly. It does not matter if it is the right or left leg, but must be a front leg. After its leg falls to the ground, quickly summon a Legion (preferably Guilt) and press Force Attack (default Triangle). Attack it for one volley, then press Force Attack again and begin to get away from the Boss. Unsummon your Legion, and look at the Boss while in one of the two small clearings. While facing the Boss, hold R1 and as soon as its first laser is about to hit you, press X and movement Analog-stick Right. While still holding R1, repeat that maneuver once again. Then, repeat by attacking the leg and so on. Note: If the Boss falls from its perch, quickly get near its head and attack the now visible silver orb along by using Triangle with your Legions to assault it.

This is the "human shield" Legion. They are best used to create a temporary safe haven. Basically, summon them and keep them in passive mode so that they do not move, but protect. Then, trek out slightly and face your foe. If you find your enemy's numbers are too great, simply fall back to your safe haven and battle them from behind your shields. You may notice that the Arrogance Legion does not exactly pack a whole lot of power in their attack. However, if you wait until they have just a little bit of health remaining, press Force Attack and watch them put the hurt on. Then unsummon them and fight ferociously until you have restored your soul power.

These are the little midgets with razor fingers. Once you lock-on to a hard to-defeat metal enemy and press Force Attack, they will surprise with how they burrow into your opponents and take their health down a by a considerable amount. They are by far the worst fighters when left in active mode, which is why they are not recommended for large group fights unless you are in a situation where your attacks are almost worthless. Note: The Flawed Legion's extra abilities and the group's unsummoned special attack are by far the most useful of any legion.

Their little floating bombs also turn into convenient little land mines. This legion is best used against Denu, or the metallic and shiny opponents that are impervious to your attacks.

Make sure to level up one organic-attack Legion and one inorganic-attack Legion (for example, Guilt and Flawed) until stage 9. After that, you can go back and level all of your Legions equally. Blasphemey and Hatred Legions are by far the hardest Legions to level up. Take out one of your more powerful Legions along if you are using either one of them. On the Lakeside level, have Malice Legion and Flawed Legion equipped. At the beginning of the level, kill one of the Spiked monsters on the first ledge. You can attack the Cannon monster a few times and make him fall off the ledges without dying (leaving the Spiked monsters still alive). Then, summon the Malice Legion and have them attack the monsters from the safety of the top ledge. This will allow you to get the power ups later in the level after leveling up Flawed Legion to get the double jump.

When using the Guilt Legion, treat them as your troops and yourself as a general. Command them into attacking targets who pose the largest threat to you by locking on and using Force Attack. If you are in need of protection from an onslaught, unsummonm then resummon the Legion after putting it into passive mode. Then, when enemies close in, press Force Attack and let your minions do the dirty work.

When you are using the Gun Legion, press Triangle as fast possible. Every time pressed, your legion will fire a full strength shot while using no SP.

The Hatred Legion is useful when you need some serious back-breaking power. It is best to rely on these Hulk-like legionnaires if the enemy's number is great and you are in need of a little break. They are best left in active mode. However, if you fiddle around with passive mode and target elimination, you can become a ferocious force with this legion.

To get the multiplier, get the target result. You can view it by using Select. Try the achieve the maximum time. For health and soul, after defeating the Boss, quickly press Start and use health and soul item to get full. If you get the all targets closely, you will get something like 3x for the experience multiplier. Note: You can pass the target for special monster, health and soul, but you cannot pass or get less than the level time and Boss time.

Find a location where enemies spawn in groups of two or three. Put a Legion on active attack mode and let them kill those same enemies for hours. This works if your Legion is strong enough, but check up every ten to fifteen minutes to make sure your health is still the same. If it has changed, check more frequently to make sure you do not die.

Pause game play before the last part of your health disappears. Use a healing item, and you will still have that life.

The Total Results menu will be unlocked if you finish the game once on any difficulty. Any mission done after finishing the game will count as Side-B missions.

Finish the game on hard difficulty. Super mode will then be available when you start a new game. Sieg's sword is different.

You will be able to play as Arcia once you finished the game on normal difficulty.

Hard mode will be available if you finished the game once on normal difficulty.

Once you finished the game on the first level, they will be unlocked in the main menu. Liv Special PV is a short movie about the making of the theme song.

Finish the game and you can select English voice acting and subtitles for cutscenes in the language menu.

We have no unlockables for Chaos Legion yet. If you have any unlockables please submit them.

We have no easter eggs for Chaos Legion yet. If you have any unlockables please submit them.

We have no glitches for Chaos Legion yet. If you have any unlockables please submit them.

We have no guides or FAQs for Chaos Legion yet. If you have any unlockables please submit them.

Submit a cheat for Chaos Legion