Use the above links or scroll down see all to the PC cheats we have available for Command &amp; Conquer 3: Tiberium Wars. 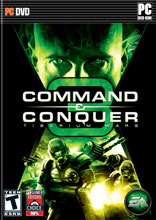 This trick is useful for versus online multiplayer matches with 10,000. Play as Nod or GDI, and place a Crane. Then, build a Power Plant from each, and place them. Once this is done, build two Refineries, and place them. Next, sell one, and build another. On the other, build queue. Start building a war factory. Place it, and start to build another one. Make sure you have placed your second Refinery. Then, build two Harvesters from your War Factory. In the meantime, build Refineries and a Comm Center. The moment your Harvesters are done, start building as many Scorpion Tanks as possible. Place other War Factories and Power Plants as well to boost production. It is also helpful to place an anti-infantry base defenses near your MCV to stop the "Engineer rush" tactic. However, this uses power and is not necessary. This tactic works best on Redzone Rampage since each player starts with boosts resources as the blue Tiberium. Nod is the fastest since it has the quickest build speeds. Also, build Predators instead of Scorpions. As soon as possible, place the Tech Center, and upgrade tanks with either Laser Capacitors or Rail Guns. This will not always work, especially when you face upper level players in the higher ranks. However, it is possible to finish a battle in less than ten minutes with this tactic. It works best with 10,000, but can be done with more; however, it is harder as the opposition will have stronger weapons than you. It works well with 20 as you can use shortcuts and an extra Crane to boost production and speed of rush.

Note: This procedure involves editing a game file; create a backup copy of the file before proceeding. Use a text editor to edit the "skrimish.ini" file in the "C:Documents and SettingsUserApplication DataCommand & Conquer 3 Tiberium WarsProfilesProfileName" directory. Change the "10000" number of starting credits to any desired number.

We have no unlockables for Command &amp; Conquer 3: Tiberium Wars yet. If you have any unlockables please submit them.

We have no easter eggs for Command &amp; Conquer 3: Tiberium Wars yet. If you have any unlockables please submit them.

We have no glitches for Command &amp; Conquer 3: Tiberium Wars yet. If you have any unlockables please submit them.

We have no achievements or trophies for Command &amp; Conquer 3: Tiberium Wars yet. If you have any unlockables please submit them.