Use the above links or scroll down see all to the GameCube cheats we have available for Conflict: Desert Storm. 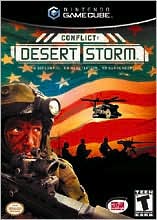 To take out helicopters with one shot use the sniper rifle, it sounds mad but it will take out a helicopter with one hit.

To take out tanks fast use the "Missile Launcher"

To kill enemy's fast you must use the "Machine Gun"

You can change the color of your soldier from white to black or black to white by blowing him up with a grenade and finishing the level. Note: He will lose experience -- do this early.

The game sends an infinite amount of troops after the alarm has been set. The best way to defend yourself is to charge ahead as fast, but also as safely, as possible. In some levels you can cut down the number of men by almost fifty. If you are low on ammunition, health, etc., this is a good way to cut down on the amount of men you have to deal with. It also works sometimes if you send a man far ahead and hold him there, then do your objectives for your mission. Once the alarm has been raised, an infinite number of enemies will start originating from certain points in the level such as barracks, campsites, or sometimes level boundary lines. The only way to stop this flow of enemies is to find the point at which they are appearing from and "secure" it. In other words, you have to kill all the enemies in the area (or building) and remain there for a minute or two to make sure no more show up. This way, you can systematically shut down the enemy's "points of origin", then complete the level even after the alarm has been raised.

SCUDs can be blown up with the sniper rifle if they are in the launch position. Shoot the rocket a few times with it.

On certain levels, tank mines can be truly annoying. Instead of getting your worst man to go out and run on the mines, throw a grenade on them and they should all explode.

If you need to take out a tank but have no more long range rockets, it is possible to get close to it without getting hit. First, you will need to have a sniper rifle to zoom in on the top of the tank to take out the gunner, if there is one. After he is down, throw a smoke bomb in the direction of the tank. Try to get the smoke bomb in as close to it as possible. While the smoke is in the air, you can run up to the tank without being hit. The smoke will make it impossible for the tank to see you. Get directly next to the tank and plant a C4 next to it. After it is planted, throw another smoke bomb slightly further away from the tank. Make a mad dash for the smoke. If you are fast enough, you will get behind the wall of smoke and can then make your way to safety. Then, detonate the C4. If you have C4 with a detonator, run to the tank, crouch, plant the C4, then quickly run away. When you get about 10 feet away, use the detonator to explode the C4.

Find the man with C4s and give his detonator to someone else. Keep everyone back except for the man who has the C4. Quickly run to the tank and plant the C4. When you are finished, get another troop to call him back. When he runs back, the tank should be focused on him. Change to the man with the detonator and use it. If this works, everyone should make it out alive. However, if he does not make it, you can clear the area then heal him. You can trick the tanks by using any of your men except the demolitions man and create a diversion on the side of the tank opposite to your team. Get the man next to the tank so that he will not be harmed, then switch to the demolitions man. While the tank is looking at the other man, sneak up to it, plant a C4 explosive, and run away.

When you see a tank (for example, the one directly in front of you at the start of Scud Alley), take two people, Foley and Jones. Have Foley shoot out the gunner. The turret should then rotate a full 360 degrees as if it were checking where the shot came from. At this point, switch to Jones and run straight at the tank. It is essential that you reach the tank as soon as possible. As soon as you reach it, lay down. Foley should snipe off the advancing soldiers. As you are behind the tank, they do not hit you and instead cause damage to the tank. Plant a C4 and detonate it. Just let Jones blow up with it. Jones will be dead on the floor behind a tank (in cover, which is useful). At this point, switch to Bradley and have everyone follow him. Rush forward using the tank for cover, shooting as you run then heal Jones. This trick can be used for just about any tank, even moving ones. Just run up behind them, fire a shot at the back of them and they will stop, allowing you to plant the explosive.

All tanks have very heavy front and side armor. However, the tank's rear is lightly armored. Smaller tanks can be hit with a rocket almost anywhere and will usually explode. However, larger tanks must be attacked with an explosive from behind. If you shoot it from the front or side, chances are you will not even make a dent. To take out the tanks with the satellite dish on top, shoot the satellite dish with a sniper rifle and the tank will explode.

Do not give too much of the powerful items such as tank mines, C4, anti-tank guns, etc. to a single person. If you have this person advance and he gets taken down by a tank, your other teammates might not have the firepower needed to even get close to the downed person, let alone heal him. It is always a good idea to have each teammate equipped with at the least one high powered explosive in case you need to take something out.

The Invasion Of Kuwait: Easy Insertion

Instead of taking the path under the bridge, go across the bridge and hide in the building with the guns. Shoot the soldiers as they come in.

On your way up the stairs to the marketplace, there is a sniper behind the stairs. Well you can take him out without taking a hit. At the beginning, where the hidden tank located, is a walk-way to the left. Follow it to the end then make a left. At the end is a staircase. Go up it and you will see the sniper. Take out your knife and kill him silently to get stealth points.

Switch characters to Jones, who is defending the rear. You will see a tunnel to the left. Go in it. Once the tunnel ends, keep going into the next one. When an Iraqi appears, shoot him then make a right turn. You can go either straight or left. Go to the left to find a hidden RPG and light machine gun against the wall you are facing when you come out. If you went in the correct direction, there should also be a truck at that location.

When you are trying to kill general Aziz at the end, take out the "laser" and lock on so it turns red. He will run out. Take him out with a sniper, then evacuate. When you call in an artillery strike on General Aziz's underground bunker, an alarm will alert the town. General Aziz will then run out of the bunker. You have to shoot him before he escapes. Connors is recommended for this trick. Have one of the others off to the side, near the exit to your extraction area. Have Connors directly in front of the doors to Aziz's bunker, but back as far as he can be from the doors. Have your first squad member "lase" the bunker for the airstrike, then switch to Connors before the doors to the bunker open. As soon as the doors open, have Connors open up on Aziz and his two guards with either a machine gun, or have him launch a RPG/rocket into the bunker.

To access cheat menu, at the main menu, enter Left, Left, Right, Right, Up, Up, Down, Down, X, X, Y, Y. Go to your options, and the cheat menu should be activated now.

We have no unlockables for Conflict: Desert Storm yet. If you have any unlockables please submit them.

We have no easter eggs for Conflict: Desert Storm yet. If you have any unlockables please submit them.

We have no glitches for Conflict: Desert Storm yet. If you have any unlockables please submit them.

We have no guides or FAQs for Conflict: Desert Storm yet. If you have any unlockables please submit them.