Use the above links or scroll down see all to the Xbox cheats we have available for Conker: Live &amp; Reloaded. 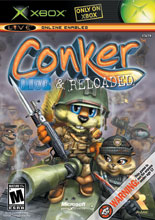 How To Find The Three Keys For The Spooky Doorrr

First, in the chapter spooky after you change bat to squilel, then in the main hallway there is a big door that where you just came in. This is when you need the keys. First, the first key is on top of the dining table. The next key is in the big circle in the maze garden and the final one is in the big roof in the room with the hole after that in the roof there is a swich pull it then there is a secert door go there and to the door. (Warning;watch out for zombies) (another Warning: if you have a key and on a high place and you fell you have to start over to get the key again. )

How To Beat The Big Bear And The Puppet Girl

First of all this place that I am talking about is a secret place. Okay in the level where your in the tank in the war there is a big thing with two big cannons blast all the legs and it should fall over. After that then go down there (Tip;there is no turning back)then talk to puppet girl and she says there are a lot of boats and you need to shoot them. Then after that talk to her again (this is the scary part first of some reason Rodent said no then the big bear came out. Okay this is how you beat the bear. Fight the bear gets these rockets then you shoot those two rockets then after that you blast the hand (which the girl is there)then she will fall. Then the bear keeps turning and turning and their should be a big button on the back shoot it then bear picks up the girl. Second of all, they have LASERS! But also blasting the lasers isn't easy because once they you, your tank explodes. Just try your best. Then again blast the girl and the button. Finally, the bear gets the big guns its impossible to shoot far away so this is what you do run to the bear right where his stomach is at then when the bear turns, you turn too then keep shooting at the rockets until the rockets are gone. Then after that the girl says"This isn't over" then the girl has a BOMB! When she press it, you run in the hole fast as you can and the time on the bomb is 4mins and 30 seconds.

How To Beat Alien Boss

So an alien just poped out of the panther king - that makes perfect sense. Here is how you beat it. Pull the first lever to open the air lock and make kitty and professor go bye-bye. Get to the space suit. Here is were the fight starts. When he lifts his head, he is going to do a tail swipe be ready to jump. When he opens his mouth he is going to bite you, block and hit him with your three hit combo. When he falls rush to his tail and rotate the thumbstick time it for the air lock. Do this 2 more times and you win.

Cruise Around The Ditch

First, you have to go to the ditch level. But you need to be a sky jockey in order for this to work. Go to the mobile units and get a mule. Go all the way up as you can but don't go move to left or right. Eject out of you plane and try to land on it. (make sure nobody is riding in it too or it won't work). You can have other players go on top of your plane but not in it. After you eject and land on your plane, the mule will seem like it is gonna crash but you will actually go around the ditch. The only way you can get out is to jump. If you are in multiplayer, you can have your 2nd player jump on top of your mule and ride too! Things you can do with multiplayer: Snipe-sniper, Shoot-demolisher, grunt, sky jockey, Throw daggers-sneeker, Red thingy-fire guy.

Not Dying From A Long Fall

First be a sneaker with a upgrade. If you happen to accidentally fall from a high place (a place where you will kurrsplat) and it is set on disguise just keep on pressing the x button until you fall on the ground with no damage. It may take a while before you will get the hang if it.

First you have to go to a near by enemy mobile units with a character that can do good damage (sneaker, grunt, sky jockey). Then you'll have to start attacking it. You can attack with cars too (grunt, fire guy demolisher, etc). When the mobile units is disabled, keep attacking. If you do this correctly, there should be continuous CP's. The conker points count for kills. If this stops that means that the person that was in the car got out. You can do this as much as you want to unless a person from the other team heals the mobile units. Or until you die.

This will work if you are a demolisher. If the opposing team steals your flag/plans, and if they die, one way you can retrieve it is to you just shoot the flag/plans. If it suddenly disappears, that means the it went back. You can make it hard for the other team.

If you want to do this code, you have to be a Sneeker. This cheat will work on any level with a high place to jump from. Equip a grenade, then jump from a high place (while holding the right trigger in the air) so when you land, you land laying down. While you are laying down (before you get up), quickly equip your Sabre and the Sneeker will keep using his Sabre repeatedly when he gets up. This cheat is good for killing enemies easily.

Unlock All Conkers For Multiplayer

At the main screen press b, b, x, y, black, white to unlock all conkers.

Once you beat the game on story mode, you unlock potty mouth for multiplayer. This allows you to hear the swearing. (No Beeps!)

We have no easter eggs for Conker: Live &amp; Reloaded yet. If you have any unlockables please submit them.

If you do your infinite sword, while you are standing still, walk forward very slightly. If you do this correctly, your sword will start moving in slow motion.