Use the above links or scroll down see all to the Xbox cheats we have available for Counter-Strike. 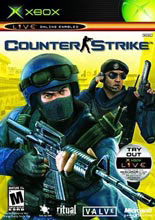 When rounding corners, jump into the air and turn to face the new direction. This will make you harder to hit (especially with a headshot) to anyone lying in ambush on the other side.

No Need For Helmet

When you buy Kevlar, you don't need a helmet. Helmets just make you look funny and are a waste of $$$.

When you are a terrorist, if theres a box or platform just out of reach when you jump and crouch in the air, you can have another player crouch next to it, then jump on them then onto the platform. You can then plant the bomb there. This usually makes it impossible if there's only one counter-terrorist left, and if there are more, atleast two of them have to be there.

Good Sniping Spot In The Mitilia

You should play as a terrorist for this hint. When you start, You leave the building and exit the front door. You should see two boxes to your right. Stand behind them and wait for a counter terrorist. Have fun killing people! Note: For this to work best, Get a 2x zoom sniper.

When walking or running around, keep your crosshairs at around head level. This way you'll have a better chance at a headshot if someone jumps out at you. It also decreases the time it'll take to draw a bead on someone's noggin.

Always stay on the move. A stationary target is a dead target, and you never know when there's someone on the other side of the map using a sniper rifle to draw a bead on your mellon. With very few exceptions (see the next tip below), don't ever stop moving, especially when in a firefight. Learn to use the mouse so you can aim while moving around to dodge your opponents' attacks.

Pressing jump then crouch is an important technique to master. It'll allow you to jump onto taller obstacles, and will let you jump through narrow windows or gaps. Practice it and learn how to use it well.

When starting out as a Counter-Strike newbie, get used to weapons like the MP5. It's an automatic weapon, fairly accurate, and will serve you well to build up your skills before tackling other weapons.

Switch To The Pistol When Needed

Don't underestimate your sidearm. If you run out of ammo or have to reload in the middle of a firefight, switch to your pistol and unload a few rounds while retreating. It may just save your life.

Don't forget to buy armor and a helmet. It'll greatly icnrease your chances of survival.

A team needs a mix of weapons. So, if you notice everybody on your team equipping to play the sniper role, buy an automatic weapon to help them out and provide cover.

If you can afford them, always buy a grenade at the start of a round. Toss them around corners where you suspect opponents lie, and use them to stop rushes and weaken opponents. Be careful with Flashbangs, though, as they can blind you and your teammates as easily as the opposition.

When you spot a sniper, don't try to outshoot him. Either avoid him if possible, or rush right at him while moving erradically. Most snipers will freak once you get up close, and you can mow them down.

Learn The Level And Objectives

Know thy level. If you don't, glide around in spectator mode to learn the layout and objective locations like bomb points and hostages. Pay attention to where other players go and pay attention to the layout of a map. Knowing the quickest way from point to point is key for success.

Always travel in groups. The odds of survival are greatly increased when you have backup. At the start of the level don't go rushing off by yourself. Stick with your teammates and stay alive.

Don't do the same thing over and over. Opponents learn fast, and good opponents learn really fast. If you score an easy kill or ambush one time, don't do it again right away. Take alternate routes through the level ocassionally. Being predictable will quickly get you killed.

Use the radio commands quickly to communicate efficiently. And don't hesitate to respond to them if you hear them. When someone says "I need cover", they probably mean it!

You may often have to rely on your sidearm, so upgrade it if you can afford to. It makes a lot of difference.

Reload Before Running Out

If you can help it, don't wait until you're totally out of ammo to reload. And if you can, seek cover while reloading, since it makes you quite vulnerable.

Use Hostages For Cover

Opponents who kill hostages earn a cash penalty, so using hostages for cover is a good, if cruel, tactic. Of course, it makes it hard to shoot back yourself.

Use sound to your advantage by listening to movement sounds. This will often allow you to pinpoint the location of opponenents and avoid running into them headfirst. You should also learn to croush or hold down the walk key (shift by default) to mute your own movement. Finally, use headphones or loud speakers to make things easier to hear.

Use Cover And Dark To Your Advantage

Hide in dark corners and behind obstacles to make yourself harder to hit and see. This is especially important when sniping.

Check For Ambushes Before Disarming Bombs.

When you spot a planted bomb, don't rush right in and try to disarm it. Clever Terrorists will lie in ambush and try to nail anyone made vulnerable by bomb defusion. Always look for traps first.

Cover The Bomb Carrier And VIP

Especially for weapons like the AK-47 that quickly lose their accuracy in automatic mode, firing in quick bursts is essential. Just tap the fire button/key quickly, then tap it again.

Be careful when you duck down for that acuracy shot because those who dont duck usually keep there crosshair at waist level. Most people also aim for the biggest part on there oppenents body. It, always being the shoulders to the waist. Or if you are battling it out with another player standing up, dont duck your sure to get shot in the head.

Snap Out Of Sniping Mode

When you're zoomed in on someone, quickly double tap the "next weapon" key to snap out of zoom mode, switch to another weapon, then switch back to the sniper rifle. This is great if you need to move or dodge quickly.

Switch To Lighter Weapons To Run

Readying lighter weapons like pistols and the knife allows you to run much more quickly, so it's a good strategy when you need to get into position quickly --like at the start of a level.

If you're gonna snipe or hide, always do it in the least expected place. Hide in vents, or over doorways and have a free shot at anyone that passes underneath. You could also "bait" someone by leaving a hostage out in the open and hiding nearby in the shadows. They'll rush for the hostage, right into your line of fire.

The key to a good snipe isn't in a slow aim, but to shoot quickly before the target has a chance to react. Many times, a constantly moving target will make you wait until your bead is sure. By the time you're able to take a good aim, they're usually in firing range of you and you've lost your advantage. Also remember that the AWP is usually one shot / one kill, and that the Scout is usually two shots / one kill. Hit them fast and you can't go wrong.

Crouching increases your accuracy, so if you get a chance to take a pot shot at someone while they're not looking, or if you're lying in ambush, make sure to crouch so your first shot will be much more accurate. Crouching while sniping is also a must.

In a Hostage Rescue Map, as a Terrorist, take a hostages with you to the most isolated and hidden spot you can find. That way the CT's will have a harder time finding the hostages and it will be easier for you to win (just remember to guard the hostage).

Don't Give It Away

Use team chat! It can be useful to orgainis your team or to decide what to do next round. Far too many people blurt out their tactics over public chat, leaving the enemy with a good opportunity to counter it.

Little tip for all you Non-PC Veterans, when trying to move fast, switch weapons to your pistol or knife and gain a slight speed boost.

Becareful Where You Hide

Again a tip for noobs, wooden doors & some thinner barriers arent always the best cover, you can take damage & even be killed when sitting to close to these for cover.

After a few days of playing I noticed several of the Non-PC Veterans are planting the bomb directly on the Red Bullseye at the bomb site. You can however place the bomb around the same area not directly on, this sometimes helps confuse and slow down those looking to defuse it!

One more hint for the new guys! Ever see someone jumping up ontop of a box and no matter how hard you try you cant? Stupid little trick copied over from the PC, when you jump hit your crouch button & forward and you'll get right on top!

Don't block your teammates' line of fire, don't block their line of movement while retreating or strafing. And if a teammate is being shot at, don't just let him die. Toss a grenade if possible and join the fight. Because if they kill him, then they're coming after you next. Better to stop them sooner than later.

Enter "PlumRugOfDoom" as a case-sensitive profile name. The terrorists at Prodigy will now have purple streaked hair.

Pause the game and press Right(3), Up, Down, Left.

Pause the game and press Up, Down, Left, Right, Down, Up.

We have no unlockables for Counter-Strike yet. If you have any unlockables please submit them.

We have no easter eggs for Counter-Strike yet. If you have any unlockables please submit them.

We have no glitches for Counter-Strike yet. If you have any unlockables please submit them.

We have no guides or FAQs for Counter-Strike yet. If you have any unlockables please submit them.

Submit a cheat for Counter-Strike