Use the above links or scroll down see all to the PlayStation 2 cheats we have available for Crash Twinsanity. 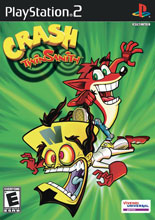 Getting Lives With Out Dying

When Cortex is in the pipe you can throw him off an edge over and over until you have enough lives that you need. NOTE: Don't fall off before Cortex doses because it will take away one of your freeman.

Cortex's Sacrfice For A Life

If your crystal crazy with cortex if throw him into any hazard that will kill him you may get an extra life very possible at most places TIP: don't expect for it to happen all the time I tried and didn't happen most of the places I went so if low on life then try killing his sacrifice maters.

While you're getting chased by the walrus, don't jump too much because it'll slow you down.

When you're in Nina Cortex's library. Jump on the brown sticks behind where you start. Then keep jumping that way. The green stuff won't come up either.

At the beginng of the game, where it says three years ago. Press the start button and put the game on widescreen. You will see an orange ball. That wasn't there before.

At the start of the game, at the menu,(After the bottom reads; "Three years ago" You see a seagull land on Cortex's block of ice. Wait until the seagull disappears of to the right of the screen. Now, press Start, go to the options, and switch to Widescreen Mode, and you will see the Seagull at the right of the screen, stopped in mid-air!

Get 100 eggs and you will get an extra life.

Complete the game with 100% to get a secret ending to the game.

After going by tombstone, when he charges his flamethrower and puts it down, run away from it. Body slam a big button that opens when he shoots the tombstone. Do that repeatedly. If freezes after game, you should save right after he finishes talking.

Throw Neo into the levers, after that step on green button and stay away from the fire. Keep doing this until he is defeated.

We have no cheats or codes for Crash Twinsanity yet. If you have any unlockables please submit them.

Back To Other Levels

When you beat the game you are allowed to go back to levels past Cavern Catastrophe.

We have no easter eggs for Crash Twinsanity yet. If you have any unlockables please submit them.

We have no glitches for Crash Twinsanity yet. If you have any unlockables please submit them.

Defeating the Bosses of Crash Twinsanity

Submit a cheat for Crash Twinsanity