Use the above links or scroll down see all to the Nintendo DS cheats we have available for Custom Robo Arena. 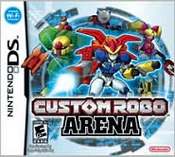 Whoever owns Hadron knows that it can do a regular charge like any other robo. But if you hit the jump button ONLY ONCE and hit the charge button, it will do sort of a flying kick towards your opponent.

Ok, if you've beaten the game (like I have), you know the part where you have to fight an ALMOST invincible Hardon. You can do damage to him if you hit hit before he becomes invincible. There is NO WAY to kill him in this small amount of time. But it is cool to see him with some damage.

You know Cheepers, the parrot that hangs around with Marv? Well, you can fight him. In the "Onto the Grand Battle" portion of the game, go talk to Marv. He is in Midheart High's school cafeteria. He wants you to beat level 10 of the arcade battle challenge in the Robocenter with the Chick Robo. To get the Chick set, go to the Team Numero Uno clubhouse. Go up the stairs and check out the boxes on the left. Someone should come out. Fight him and he will give you the Chick set. If you beat level 10 without the Chick Robo first, it will be easier. You don't have to use the whole set, just the robo. After that, go and fight Marv. When you beat him, talk to Cheepers. He'll say Marv is weak and wants you to battle him. Say yes and after you beat him, he'll be throwing his robo cube up and down with his beak.

If you have every body part except one, don't freak out. After you completely beat the "Onto the Grand Battle" portion of the game, go to the Team Numero Uno clubhouse and go inside. Eddy should be standing at the deck and wants to "talk" with you. Fight him and when you win, he will give you Mistral, the Power Lightning Sky.

To go into the Underground, you must have the Dark Commander's Mark. (This is only do-able in the "Onto the Grand Battle" portion of the game.) About when you are halfway done, go to the Team Numero Uno clubhouse. You should see a dark replica of you standing there. Battle him and get the Mark. Then go to the harbor district. Go to the most southwest house you can find. Talk to the man and he will open up a passage to the Underground where you can buy illegal parts. (They are really expensive. Leg parts and Holloseums are $200 a piece!)

We have no cheats or codes for Custom Robo Arena yet. If you have any unlockables please submit them.

During the Onto Grand Battles part of the game,go to the Team Numero Uno clubhouse. Then go to the thing that looks like a microwave and press A. Then go to the police station and talk to the guy by the right hand wall. He will give you a chip from Stark.

After you completely beat the "Onto the Grand Battle" portion of the game, go to the Team Numero Uno clubhouse and go inside. Eddy should be standing there and he wants to "talk" with you. Fight him and when you win, you will get Mistral, the Power Lightning Sky. But then Liv runs in and tries to avenge him. Fight her and when you win, she'll give you the Ray and the Sagiterrius Gun. Dennis will run in, there will be talking, and then that is the complete end of the game.

We have no easter eggs for Custom Robo Arena yet. If you have any unlockables please submit them.

We have no glitches for Custom Robo Arena yet. If you have any unlockables please submit them.

We have no guides or FAQs for Custom Robo Arena yet. If you have any unlockables please submit them.