Use the above links or scroll down see all to the PlayStation 4 cheats we have available for Dark Cloud. 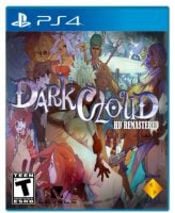 How To Beat The Ice Queen

First, buy 15-35 fire gems from Joker, then lock on to her and throw them one by one. After you've used about 25 of them you will have defeated her. Sometimes it takes more, sometimes it will take less. Either way, it is really easy.

If you hit everything in the small white bar in the duel, (each time it will say "cool") the at the end you will get a gem.

The Fastet Way To Get A Chronicle Sword

Buy a Wise Owl Sword from Mr.Moustache and then build it up to the really good Lamb Sword. After that turn it into the Atlamilllia sword. Then Chronicle sword. Its easy because there is only one build-up option.

You get this sword with the Sun Sword, which you get in Maska Lacka at Toto's house after you complete his home. Build it up into the Big Bang. After that it builds up into the Sword Of Zeus.

How To Beat Boss 5: Kings Curse.

You need: ungunga. When I did this toan was nearly dead and I didnt have anymore revival powders you could probably substitute toan with ungunga for attacking. First switch to ungunga and run towards the boss. Make it swing at you so it turns into a cloud. Then use ungungas charge attack to turn it into a sarcophagas. Then attack and repeat.

You need: tasero (forest dude I named him tasero) toan. Run up to the monkey and hit him a couple times with the sword while side stepping his moves. It wont do any damage I think. When he sits down exhausted switch to tasero and whack him once or twice and repeat.

How To Beat Boss 4: Ice Witch Something.

You need: ruby and selphie (look back to first how to beat to see who selphie is). First make sure ruby has her first ring on or a ring with fire. Second be sure to run behind a pillar as soon as you start the battle. Warning: the anti-freeze amulets don't do crap against her so don't try. First have selphie hit the witch 10-15 times with the sling shot in between the witches freeze blasts. The witch will lose her ice sheild and then the serious damage comes. Switch to ruby and wait for the witches shot to connect with the pillar. As soon as that happens move out and fire one full charged shot and one quick shot. Then move behind the pillar as fast as you can. If you do it right you can barely dodge the ice blast and do about 80 damage. Repeat till dead.

How To Beat Boss 1: Dran

You need: Toan, Selphie (Cat girl. I named her selphie), dran's feather in active item slot. If you do this right you wont need recovery items. First switch to selphie and go to the outside edge. Aim at dran and fire one shot. After it connects switch to toan and use drans feather to run up to him as soon as hes landing. Give him a good whaking with your chosen weapon. Then run to the outside edge and switch to selphie again. Repeat till victory.

Bring the 'foundation' (I forgot where to find it) to Jibudu in Muska Rakka. Then he will give you an 'ancient dolly'. Take the dolly to Marnia in Yellow Drops and then you will receive the sun gem! It has special powers: +3 all creatures, +10 attack power and +10 all elements. This is very usefull if you are planning to build-up very quickly.

Play As Your Father

First beat the whole game. After you have beaten the whole game, start a new file and you will see that you are your father and not Toan.

We have no cheats or codes for Dark Cloud yet. If you have any unlockables please submit them.

We have no unlockables for Dark Cloud yet. If you have any unlockables please submit them.

We have no easter eggs for Dark Cloud yet. If you have any unlockables please submit them.

We have no glitches for Dark Cloud yet. If you have any unlockables please submit them.

Submit a cheat for Dark Cloud