Use the above links or scroll down see all to the PlayStation 2 cheats we have available for Def Jam: Fight for NY. 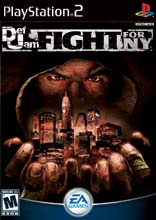 To do this, you'll need two players. When the game starts, make the other character continually taunt, while you hit him. You should see your Blazin' meter go up increasingly high, and should get your Blazin' within 15 secs.

If you need quick money in a match,don't ko your opponent just Slaming him into a wall or do crowd double team moves.But watch out for there danger meter. Just remember Money= Power, Respect, and sweet clothes and jewelry

During a demolition match successfully use the door of the vehicle as a weapon four different times. On the fourth time you should succeed at bashing you opponents head in with the door.

This is the same deal as in the Subway. Get blazin' get them in the danger zone then do your blazin' move to them you'll punch them then toss them out the window.

After completing Story Mode, reload your Story and there will be some Bonus Matches. There are 3 Free For All Tournaments, 1 Team Tournament, and a One-on-One match with D-Mob.

When your opponent is in the Danger zone, any kind of Strong Grapple attack will get you a KO.

The more expensive jewelry and clothes you wear the better the crowd will like you and the faster you can get to blazin'.

Tired of tossing them on the tracks? Me too. Well there is an easier way. Get a Blazin' and get your opponent in the danger zone then do your blazin' move to them then you'll punch them twice then it will throw them on the tracks bam K.O. NOTE: They must be in DANGER and there must not be anyone else on the tracks

When fighting Trejo in the subway, listen for the train. When it gets close, throw him onto the tracks. If he wobbles on the edge, just punch or kick him off. If timed right, the train will KO him.

When your opponent is in the Danger zone, attack them with a Haymaker (a Strong P) and you can knock them out.

When using a martial artist, get your opponent in the Danger zone. Then run up to a wall, or any object, and press P or K to jump and attack your opponent. If you connect, you can get a KO.

When the opponent is in the Danger zone, you can KO him by either hitting him with a weapon, grappling them up against a wall, or using the crowd in a double-team.

Early on in Story Mode, you will choose a girlfriend. A few fights later, you will have to choose between her and Carmen Electra. Choose your girl, and you will then control her in a fight against Carmen. If you Blaze her and win the match, you will unlock her Blazin' move. Also, if you lose, you do not get a rematch.

Enter these Passwords to get 100 Reward Points for each: NEWJACK, THESOURCE, CROOKLYN, DUCKETS, GETSTUFF. Also, to unlock a song by Joe Budden, enter PUMP.

Enter the EXTRAS menu and select the CHEATS option, now enter "CROOKLYN" as a code to get 100 reward points

We have no unlockables for Def Jam: Fight for NY yet. If you have any unlockables please submit them.

We have no easter eggs for Def Jam: Fight for NY yet. If you have any unlockables please submit them.

We have no glitches for Def Jam: Fight for NY yet. If you have any unlockables please submit them.

We have no guides or FAQs for Def Jam: Fight for NY yet. If you have any unlockables please submit them.

Submit a cheat for Def Jam: Fight for NY