Use the above links or scroll down see all to the PlayStation 2 cheats we have available for Destroy All Humans 2. 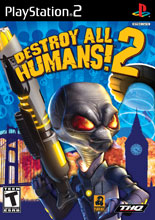 In Albion, escort the spy. When she gets to her car you'll be at a U.F.O. communicator. Call your ship and follow her until she gets to a certain blocked in area. Afterwards, land your ship and go for the datacore. After, you get it you have to transmog a car (or almost any thing you can pick up) for ammo. You can now destroy a building without your U.F.O. You have to wait until a red dot bcomes small.

When you lift a vehicle and let go then use drain from really high,it will get blown up when it hits the ground.

How To Hide From Enemies In Takoshima

When your are next to the volcano on takoshima, look over to the training place that is full of ninga's. Go over there and go to the stairs, and turn right. The funny pine trees should be there. You have to fly on to the middle of any pine tree and no one can see you. But you can see them.

First, get alert level up to red in any city, next enter your saucer , then pick an tank of any kind up, and finally when missiles are fired at you start spinning the tank and the missiles will hit the tank instead of you works for tank blasts too.

This is kind of a glitch but its easy. You need two people to do this. First, one of you body snatch a cop or military personnel. Then the one who has the cop go's and calls the all clear but before he finishes like while he is still talking the other player smashes a car on him. Sometimes you will get stuck in the human body though or the car your smashing on him will go through him.

First you need to be at Takoshima. Then you need to go in the Zen Temple. Then Kill a White Ninja and put him on a rock and use your PK and push it and you will have yourself a floating Ninja.

This is another 2 player tip or glitch it works 85% of the time. Have 1 player transmoge a car but don't destroy it have the other player try to pick it up and stop transmoging when player 2 tries to PK it. Enjoy.

Up Up And Away!

Ok this only works on 2 player and you need 2 people for this. To make this work you gotta get 2 cars and have both player lock on the cars but both players on the car and left each other up at the same time but there is a limit so don't fall.

While flying To where ever Take the Red Bomb gun shoot it and wait for 2 seconds exactly before detonating the bomb. And then you got a faster ride to where ever you are going enjoy!

In the city Albion there is a main mission where you have to fight a mutated KGB agent the way to beat him is to keep shocking him with the Zapomatic and you will beat him. Note: depending on how many upgrades you got on the Zapomatic will determine how long it takes to defeat Orkavec.

To abduct an object with the saucer quickly or one that is far away, point your saucer weapon at the object and then press L1 and Triangle at the same time.

Go to the main title. DO NOT press start. Wait about 20 seconds and you will see a clip from the game.

When calling your saucer at the landing pad, wait a few seconds and jump and use the jet pack for as high as you can. The saucer will go right through you.

Go into the street. Use PK and lift up any car. Then, smash people on their heads a few times. Eventually, the person will get stuck in the ground and have spasms. Hit them 2 or 3 more times and they will disappear.

To get an easy body snatch, even in a very crowded/ highly guarded place, target one person and use Free Love. Everybody will start to dance. Then, go up to the person you would like to snatch, and wait for the body snatch instruction to appear, then press triangle repeatedly. NOTE: This will ONLY work if you have the Free Love ability!

When lifting a human w/tele. lift him up high then slam him into the ground really hard. Very often the game will glitch, and when you try to lift the person back up their leg will be stuck in the ground! Then before they can get up start shocking them, it's like their bodies are having spasms ur something,this works especially well on the moon because when ur in the cosmonuat bubble because u can get them stuck in the roof too!

First, get the Dislocator. Then, get to a street with a lot of people and cars. Next, shoot every car and person. Finally, watch them fly!

Stay still for a while and the screen will turn gray like an old TV.

If your about to run out of health, hurry up and find a landing zone! Once you find the landing zone, land. Once you land get back in the saucer and you will have full health and ammo. Repeat this as needed.

This can be difficult you do not look around first. At this point you should only have two weapons, the Zap-o-matic and the Disclocater. Unfortunately, neither of these weapons will work effectively enough to kill both Bongwater and the KGB agents. However at the very start of the level, towards the left far wall, you will see a large container of Revelade. Around these containers are small barrels. These are explosive barrels. Just as the level starts, quickly jetpack over towards the left side of the room. Once there, try to take cover behind one of the Revelade containers. While hidden, use your PK ability on one of the explosive barrels. Once you have it levitating, either quickly swing it at the KGB agent's or Bongwater's feet, or press TRIANGLE again to push it towards them. Either will work, as the explosion is enough to take out almost all the KGB agents. Only about two to three explosive barrels are required to take out Bongwater. Do not get too close to the barrel when it explodes, as it will drain your shields drastically or kill you.

Pause the game and navigate to Archives section. Then hold down L3 while you enter the code X, Square, Triangle, Circle, Square, Circle, Triangle, X, X.

To unlock the Solaris level, you must beat the 6 missions in Tunguska.

Back In That Room Song

Down In The Valley Long Road Song

To unlock the Burrow Beast super weapon Shama Lama talks about, you have to complete all the arkvoodle cult missions in Bay City, Albion, and Takoshima. (If you wate at the start menu, a video of the game will come on and there is some footage of the super weapon. At the end of the video, it shows it killing a hippie! The weapon is awesome!)

Salad Days With Pox And Crypto

Start the last Arkvoodle Cult mission in Albion, then go back to Bay City.

We have no easter eggs for Destroy All Humans 2 yet. If you have any unlockables please submit them.

Pick up a person with with your PK. Lift the person as high as you can and pull them back down so that they almost touch the ground. Then lift them back up again. Repeat this several times very quickly and them let them go. If you did it right, the person should be doing carwheels on the ground. If it does not work try it again, but make sure that the person does not touch the ground before you let them go. Note: Talking to someone just as the person hits the ground usually makes it work, but you have to time it just right. This can work on a live or dead person.

We have no guides or FAQs for Destroy All Humans 2 yet. If you have any unlockables please submit them.

Submit a cheat for Destroy All Humans 2