Use the above links or scroll down see all to the PlayStation 2 cheats we have available for Dragon Ball Z: Budokai 2. 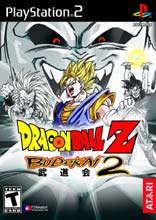 Let your opponent beat you down to little health. Then use Body Switch. You will have all your opponent's health, and they will have yours. Then finish them off with their own skills and moves.

This may take several tries. Go into the capsule store while holding down L1, L2, and R2. It may help to edit some capsules so it will save and you can keep all of your capsules. If it doesn't save it will go bak 2 the last number it was.

Pick Up Things On Ground

On the main menu, click training, then click practice. Select your character, and map. Once fighting, press the Select button. You should have max Ki.

Enter the Skill Shop while holding down the L2 button. Bulma will talk, but just leave, while holding the L2 button still. Re-enter the shop, repeat the trick over and over and your percent of your Capsules keeps increasing. This also unlocks characters for you, Breakthrough capsules, fusions, everything.

Your Choice On Breakthroughs

This combo will do nearly as much damage as her Close Call attack, but will consume just two ki gauges. Just throw your opponent with Bear Blowthrough (P+G), then as they are coming down, hit them with her Falcon Rush attack (>K,K,K,E). If timed correctly, you will chain the two attacks together for 38 hits.

To get future Trunks to a Super Sayain (1or2) and type in this command: KK->KPE and you will preform the burning slash attack (NOTE: You must input a certain set of buttons to do the Burning Slash attach properly.

This is very hard to do. First keep playing until you get the skill " Freza's Spaceship " . After that , choose him , and go to edit skils , or go to the options titoled " skills " , go to 1p and go to edit skills. When you are there , give Freza " Freza's Spaceship " WARNING: This skillwill take up 3 spaces of the 7 you get. This is a VERY RARE skill so keep playing.

Beat Majin Vegeta the first time you see him with Goku (make sure you dont fill up the Killi Meter with your battles).

Hold L1 and L2 while going in and out of the shop your percentage should raise. It goes to 99% but the higher you get it takes longer to raise it. Dont forget to buy something new or move around skills in skill edit, or the percentage will go back to what it was.

After beating Dragon World if you have collected all seven Dragon Balls then along with the usual choices of breakthroughs you might also get the chance to wish for things titled "Bulma's Costume (2)""Bulma's Costume (3)" and so on. By wishing for these you can see a different outfit for Bulma at the skill shop.

Get the Supreme Kai's Breakthrough and Vegito.

Get Tien and Yamcha breakthroughs and Gotenks.

To get Gokule get Goku and Hercule Breakthroughs and Vegito.

Choose "Edit Skills" from the main menu and choose your memory card. At the Edit Skills menu, choose "Skill List". Then hold the L2 button and press triangle to return to the Edit Skills menu. Each time you do this, up to 5 random capsules will be added to your collected skills.(Note: As you approach 100%, it takes longer to get the last few capsules because you'll keep getting duplicates of the capsules you already own. So if you don't have the patents, don't bother.)

Get Babidi's Ship and get 10,000 kili and you'll get absorbtion for Super Buu. This skill you can absorb ANYONE!!!! - even Dabura or Goku.

Move left analog stick up and down and move right analog stick left and right when Master Roshei is on the screen to your bottemright and he will spin around faster and move from side to side.

Use a memory card with a saved game file from Dragon Ball Z: Budokai. Alternately, in Dragon World, defeat Cell for the last time on Supreme Kai's planet with Adult Gohan.

In Dragon World, defeat Vegeta as Goku on Namek.

In the city, when Supreme Kai tells you about the Potara earrings, go to him to get them. When Vegeta comes, give him the other earring.

Unlock sixteen playable characters. The Adept capsule will appear in the capsule shop.

Unlock all twenty nine characters. The Advanced capsule will appear in the capsule shop.

Complete Dragon World and have all seven Dragonballs. After the credits, the Dragonballs will glow and Shenron will be summoned. The first option is "Babidi's Ship".

In Dragon World, defeat Cell as Adult Gohan the first time you see him.

In Dragon World, defeat Nappa as Vegeta. This can only be done when you unlock Vegeta and start Dragon mode again.

Defeat Majin Vegeta the first time you fight him with Goku.

In Dragon World, defeat Vegeta on Namek with Kid Trunks.

In Dragon World, defeat Ginyu on Namek as Vegeta.

You will automatically get his capsule during Dragon mode when you are in the Hyperbolic Time Chamber.

When you are waiting for a screen to load and you can see master roshi spinning in the corner, if you rotate BOTH analog sticks, master roshi will zoom around the screen.

Hoe To Get All Capsules

To get all capsules you have to enter the shop holding the L2 R2 R1 L1 buttons all at the same time. Then when entering you have to leave asap and still be holding them down (its a hard trick but with enough practice you can master it! ).

To make your move more powerful than an opponents or to make it stronger, use the directional buttons and the X, Square, O, And triangle buttons. Press these buttons repeatedly and most of the time you will succeed in your power-up.

To unlock, beat Vegeta in the third arena on Namek with Kid Trunks.

We have no easter eggs for Dragon Ball Z: Budokai 2 yet. If you have any unlockables please submit them.

We have no glitches for Dragon Ball Z: Budokai 2 yet. If you have any unlockables please submit them.