Use the above links or scroll down see all to the PlayStation 2 cheats we have available for Dragon Ball Z: Budokai 3. 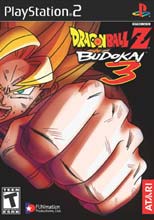 How To Unlock Cell JR

To unlock Cell JR, go to Dragon Arena, battle Piccolo, and beat him.

Complete the game 100% then fight SSJ5 Goku and SSJ5 Vegeta in duel mode. Go to dragon universe and beat it with Broly as usually. A capsule will be unlocked saying you have unlocked the legendary SSJ5 Broly.

On the level select screen, press O instead of X to select a level. When the level appears, it will be a destroyed version of it. This will not work on "Inside Buu", "Hyperbolic Time Chamber", or "World Tournament". In my opinion, its more fun to destroy the level yourself with an Ultimate.

To get Gogeta, go to Vegeta's DU. Get to the point right before you fight Super Buu with Vegeto. (Have your map on)Go to the part on your map where a whole continent is white (Ice Land). Fly there and you will talk to Kabito Kia. He will ask you if you notice a unusual power level besides buu. Then you go to the red dot on the map and fight Super Buu with Vegeto. After that you fight Buu inside Buu. Then after that you go to the red dot and fight Broly. Then you go to the next red dot and you will get a note. Then you go to the last red dot which is at the World Tornament. There you will get a green capsule that says Gogeta, "can fuse into Gogeta as long as fusion is done correctly"

Beat Gohan's DU two times then keep fling around un til you find him then you will unlock him.

Go to Grandpa Gohan House before or after you fight Raddtiz in Goku's DU OR complete Broly's Du.

You can find Android 16 at Plain among the south island. Bring him to Bulma in West City (Krillin's Dragon Universe mode the second time) to unlock him.

To unlock Metal Cooler, go to Goku's Dragon Universe the second (or higher) time. After you fight Frieza the first time, three red dots should appear on your map. Go to the one on the Central Continent. You should already have unlocked Cooler, because this will NOT unlock Cooler. Fight him at the dot. Then when you beat him, there will be a dot in the same place. Go to it and talk to Metal Cooler. After you talk to him, go just north of his spaceship. Go to the "???" event, and you will recieve the "Cooler's Spaceship" capsule. It the capsule is equipped to Cooler during battle, it will allow Cooler to turn into Metal Cooler if he is defeated in a battle.

How To Get Cooler

To get Cooler beat D.U with Goku. In namek on your second time through after beating Frieza 1 time. There will be 3 red dots. Go to the one at the bottom LEFT. Hit X. You talk to Cooler. Then there is a red dot in the middle. Go to it and hit X. Win that fight.

Find her in Gohan's DU.

How To Get The Dragon Radar

In Dragon Universe (DU), look around until you find "????" with a flashing light on the spot. Go there, and you just might get a Dragon Radar. You might also get capsules, but that's beside the point. The Dragon Radar is used to help find Dragon Balls. To show it, press the triangle button until a radar comes up. Dragon Balls will be orange dots on the radar. You must get it every time you start a new DU.

How To Unlock Frieza

To unlock Frieza, you must battle him and beat him.

To unlock Saibamen, go to Dragon Arena, battle Nappa when he breaks in, and beat him. Note: When you unlock characters in Dragon Arena, others must break in.

You know every time when a character from very hard mode transport insted of hitting you thay just hit you with a combo. Will I solve that problem. All you have to do is when you transport hold (x) so that way you can trasport behinde him so you can come up with a combo all your own. (Remeber insted of just pressing (x) when trasporting. YOU HOLD IT.)

Play as anyone be from levels 0-20. Nappa should break in beat him to unlock Saibamen.

If You wnt to unlock Bardock, you have to beat Goku's DU First. Then start DU again and before going to the red dot, head for the mountains and find a Sayian Spaceship. Press X to enter it and you will get Bardock.

How To Unlock Brolly

You have to beat Brolly on the second time through as goku instead of Kid Buu.

When you first start DU with Goku go to Goku's house and Chi Chi will say that Bulma what's you. Then go to West City and Bulma will ask if you seen Tien and you will say no then Bulma will give you the Mystery Vest.

Once you have enough ki, press L2 to go hyper mode. Press L2 again to start the ultimate attack. There will be 2 bars. The bottom one increases. When you think it's close to finishing press X, O, Square and Triangle at the same time. The bar increases 3 times

How To Get Cell Jr.

Almost the same as how to get saibaman but, Piccolo must break in while your level is 20-40

When you are in DU you can get super saiyain with Broly, Goku, Gohan, Teen Gohan, and Vegeta.

When you have Dragon Arena, go there and choose the Red Ribbon Army Base, when you exit you should have it.

First pick Frieza in third form. Next do a complete dragon rush. He will then do a cool move.

To unlock Cooler, play through Goku's DU a second (or higher) time. After you fight Frieza once, three red markers will appear. Go to the one directly south of you, right next to FRIEZA'S spaceship. There, you will fight Vegeta as a Super Saiyan. Beat him, and you will sence a power greater than Frieza's. Go to the new red marker, and there you will meet Cooler. Defeat him, and you will unlock him.

When in Dragon Universe, hold down L1 to burst into "Super-Speed".

To get an easy ring-out in the world tournament, go to the edge of the ring. Right before your enemy hits you, hold X and tap over (in your opponents direction) to teleport behind them and hit them out of bounds. Sometimes, though, they will counter and after you teleport behind them, they may quickly teleport behind you. So make sure you have plenty of Ki so if that happens, you can quickly counter them.

When preforming an Ultimate, or defending against one, rotate the analog stick slower. That way, your Ki power bar moves slower, and it is easyer to get a high ammount of Ki.

Fight Buu with Goku or Vegeta during Dragon Mode.

Beat him in Goku's Dragon Universe.

Play as Goku in dragon universe. In the beginning, before you fight Raditz, look for the sayian spaceship on the screan. Land there and you'll recieve the Bardock skill.

At the selection screen, press Left when choosing a charater.

collect all 7 dragonballs with vegeta then pick breackthrough (vegeta)

To get Broly, you talk to the supream ki and he will say he sceans a great evil. Then you defeat buu 2 times and you talk to ki agine. Goku will say he will handle it. then just go to the red dot on the map then you face Broly.

To unlock Videl, beat DU once w/ adult Gohan. Then, on the second time, go to the southern island chain, and on one island, a scroll that sais PLAINS will appear. hit X, and there will be a dialogue. After this, you should have Videl.

First, you have to get Broly then you have to beat it with everybody three times. After you did that you need to complete the training mode them, you gu back to the dragon universe and be Broly and after you beat Videl with Broly in dragon universe you will see two red dots on the map. One will be at the top right corner another will be at the bottom left corner go to the bottom and you will fight Omega Shenron.

We have no easter eggs for Dragon Ball Z: Budokai 3 yet. If you have any unlockables please submit them.

We have no glitches for Dragon Ball Z: Budokai 3 yet. If you have any unlockables please submit them.

All you needs { I mean all}

All 7 dragonballs for Goku

Created by: Man of Games. Read the full guide...

The stratagy to winning

Created by: Man of Games. Read the full guide...