Use the above links or scroll down see all to the Wii cheats we have available for Dragon Ball Z: Budokai Tenkaichi 2. 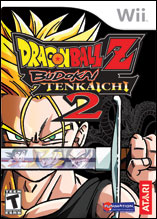 The following is a way of quickly locating the Dragon Balls without spending valuable time smashing buildings or boulders. The entire set of Dragon Balls may be found within the first four episodes of the Saiyan Saga, the very first story in the Dragon Adventure mode. Follow the directions below to find the seven Dragon Balls. Note that you may need to re-enter the respective cities (yellow dots on the world map) a few times before the items appear.

Hold Z + Plus at the stage selection screen. A sound will confirm this part of the code, then hold Z + Minus.

Use the following trick when you are facing a strong opponent. When you have to chose a Z fighter, select the weaker one first and the stronger last in order. Then, start the fight. Choose a weak attack and try to dodge the first attack. Then, use a strong attack (your strongest move if possible), then switch your fighter and do the same procedure. If done correctly, you should have lost only a small amount of your life, and you should win.

Getting The Fox Mask

Use a finishing special like Spirit Bomb on the Earth Wasteland during an Earth saga such as Sayin or Buu.

3 Different Ways To Get Easy Money

1 . In Dragon Adventure mode, play until you get to the Majin Buu Saga. When you make it to the Two Majin Buus storyline, you will be playing as Fat Buu. During that story, go to the top right area of the map and go to the Mountain Road area. Once there, Yamcha will offer you a contest to see how long you can last. If you either stay alive long enough or if you are strong enough to defeat him, you will be awarded with not only 1, 000, 000 Zeni, but you will also get Equipment Slots +4 and the Fox Mask fusion capsule. Once done, go back to the scenario selection screen and repeat. Increase Fat Buu's attributes as much as possible to make this easier. It is recommended that you spend some time in the Android Saga scenario and choose the Goku Defeated! ? ! Story. Then, go to the bottom of the map to the Southern Capital. When you are fighting, destroy the buildings to look for a Dragon Ball. Keep doing this until you find them all then summon Shenron and hope that he has the Kiss From #18 capsule. That will bring up your attributes very quickly. hlui uibyl riudrims lymru
2. If you need to buy capsules for your characters early on in the Saiyan Saga or Frieza Saga, replay the event Mysterious Alien Warrior (Saiyan Saga 00) to unlock the hidden saga Fateful Brothers. During the events of Fateful Brothers (where you play as Radditz), there are several events where you can endlessly attempt the side battles against groups of Saibamen. Each victory will result in a green Z-Item called the Saibamen set, as well as some Zeni and experience for Radditz. The item Saibamen set can be sold at Baba's shop for 150, 000 Zeni. Repeat this as many times as desired to purchase Z-Items for your team. Also, purchasing the four Purple Z-Items at the shop is also recommended. Each set of two can be fused into the items Halo and Majin Seal, which allow good and bad characters to use their Blast 2 techniques at half the energy cost. This is a very helpful item during some of the more difficult Sagas. After unlocking the Majin Buu Saga the other tip in this section is much more effective.
3. To obtain easy Zenny, fight in the Tree Of Might episode. Go into the wasteland and fight the three training Saibamen. After the fight, you will get the secret Saibamen set item which can be sold for 150, 000 Zenny. Repeat this as many times as desired to collect easy money. Note: This is best done in later sagas and when you use Super Saiyan 1 Trunks or Super Saiyan 2 Teen Gohan in the Cell saga and others.

The best Z-Items you can have are of the following: 1 Genuine Power, 4 Title (Tenkaichi), 1 Kiss of # 18, and either Majin Seal or Halo depending on your character.

To get 100% in Story mode, get a good set of Z items to power-up characters. This will make it easier to defeat the high level characters you find in special battles. Find and complete (win by defeat) all of the special battles. This will unlock alternate plots. An example of a special battle is the Piccolo vs. Raditz battle. It is the very first battle in story mode.

Go to evolution Z. Then go to item fusion and select power ball under fusion type and select nappa, raditz, zarbon, or vegeta (scouter) under secret type and fuse and if you can't go to the item shop and buy Z item fusion then do it (buy a lot).

During a Free Battle or Tag Battle if you want to switch your character before he or she dies, when you see a picture of the person with a flashing blue bar beside it under the person you are using, press 2 and your charecter will say something then leave. A few seconds later the person you chose to bring in the battle will teleport to the arena. Tip: If you want to switch out when your being either Grandpa Gohan, Master Roshi, Hercule or General Tao. They will run just off the ground like an idiot and it's REALLY funny!!!!

When you Unlock Great Ape Baby, one of his moves is Super Galick Gun because he absorbed Vegeta. But!!!! When you play as him his move is Super GARLIC Gun. :)

Easy Win Against Cell With Hercule

In the Android Saga, you have to fight Cell Perfect Form with Hercule. An easy way to waste time is to repeatedly grab him. (shake the Nunchuck to the left or right once.) This keeps sending him away from you, allowing you to run. Use dash to run, or it will be difficult to win.

Enter the following password for a level 115 Ultimate Gohan.

Enter the following password for a level 125 Super Saiyan 4 Goku.

Enter the following password for a level 122 Great Goten.

To get Super 17 you have to fuse the items HFIL Fighter with The charecter Android 17.

Reach the part where you fight Android 17 and 18 in History Of Trunks Story mode.

Unlock the Bardock The Father Of Goku scenario in Story mode.

Defeat Burter in Frieza Saga Story mode to unlock him.

Defeat Cell with Piccolo in Android Saga Story mode to unlock him.

We have no easter eggs for Dragon Ball Z: Budokai Tenkaichi 2 yet. If you have any unlockables please submit them.

We have no glitches for Dragon Ball Z: Budokai Tenkaichi 2 yet. If you have any unlockables please submit them.