Use the above links or scroll down see all to the Game Boy Advance cheats we have available for Dragon Ball Z: Buu's Fury. 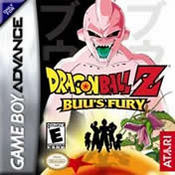 Collect all Z Exhibits and all Hercule Exhibits.

After chapter 11 go to where you fight broly. Then save in the save circle before you go to where broly was. Then get goten, trunks, goku, or vegeta use fusion with any of them (if you don't have fusion for goku/vegeta its gona be hard until you get it) then enter where broly was and there is gonna be a destroyer kill it then leave and enter again kill it and you'll gain exp for both of the characters that are in the fusion.

First you need to unlock gogeta then after you unlocked him then turn gogeta and switch characters with anyone then go to the instant transmission circle in kami's lookout. When you go to another place you will see that goku is giving you a lift instead of gogeta then choose any planet or place then when you landed on the place you will see that gogeta will come and then he will leave.

In order to cancel the big bang attack first you need a lot of Energy. Second you throw the big bang and thirdly you have to fire an energy blast in front of it and it will automatically be vanished.

To get a lot of cookies you need a lot of patience and time and cookies can be really useful when you don't have anything to heal yourself with. What you do is you go to outside of the Capsule Corp. building and walk to your left and there should be a lady named Mrs.Brief. She'll say "Isn't it a beautiful day out today,*characters name* and she'll give you a cookie. You can do this as many times as you want.

When you finish the fight with that tall guy with Videl she gets beat up and Gohan asks goku to get a senzu bean from Yajarobe(at Kami's lookout) you get the senzu and then you use it. Go back to Gohan without a senzu bean and talk to him then the next match you will have 255 senzu beans.

You will receive the Z-Fighter exhibit Korin's Cane from Korin himself after you give him red snapper fishes.

Go to the Cave of the Ancients on Grand Kai's Planet after completing the Other World Tournament and talk to Bubbles.

There is an invisible chest in front of four trees on Kami's Lookout. Check between the middle two.

After beating Chapter 11, open the level 145 door with Goten in Pilaf's Castle, proceed to where the Dragon Ball was found, and beat the enemies.

Break the level 140 barrier with Gohan in the East District 439 area and proceed to the end of the area to find the chest.

In Diablo Desert, destroy the boulder one area directly south of the Save Circle

After killing Kid Buu, return to the train. On the place where people usually were, you will find 2 enemies. Defeat them for this box.

Talk to a scientist in the left side of the main building of Capsule Corp.

Defeat Broly at the volcano.

Walk around Yajirobe counter-clockwise three times and he will drop an item near Babidi's Spaceship. It is the artifact Yajirobe's Sword.

On Goku's house, go to the toybox and search it for this item.

Finish the game and then talk to Baba, on Yenma's office.

When you fight super Buu with gohan, when you get his health in the middle, it will seem like his health is not going down, but aculey it is! Just keeep on fighting.

After you get a player with Super Saiyan, you can't fly with him in the normal world map area. If you go to Kami's Lookout, go to the second floor and use the middle door. Once you are in the room, go Super Saiyan and walk over and click on the window. You should fly out as Super Saiyan. If it doesn't work, wait until you wait until Goten and Trunks are asked to take a nap. I wouldn't use it more than about a hundred times, because it is kinda glitchy.

If you have low energy ,turn Super Sayain & you'll have full energy. (Only when in Super Sayain). When you turn out of Super Sayain, you'll still have the same energy level you did before.

Run the Orange Star High School track 3 times around in under 16 seconds.

When doing a Fusion Dance, when it says "Your Turn" press: Up, B, Left, Down, A.

In order to unlock gogeta (or vegito) (the fusion of goku and vegeta) you have to collect all the hercule and z exhibits.

We have no easter eggs for Dragon Ball Z: Buu's Fury yet. If you have any unlockables please submit them.

(this may not work all the time) When you are in the hyperbolic time chamber as trunks and goten, first turn SS with trunks, then change to goten at the save pad do the same then change back to trunks, fight goten power down, then try to do the fusion another goten will fly from the back ground. (you might see a SS goten).