Use the above links or scroll down see all to the Game Boy Advance cheats we have available for Dragon Ball Z: Collectible Card Game. 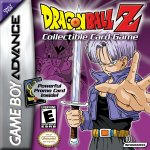 Krillin is pretty easy to defeat. Have cards that rase your anger. Also have defensive cards to. If you dont have defense, you will be gone by the 3rd turn.

Select Gohan as you character. He gets a bonus of two power level gains in his round. Next, put all the Defense cards you have in the deck. It is crucial to stop Guldo's MP card. Then, with all remaining cards, put them into Anger cards. This should stop all of Guldo's attacks. Also, Gohan's second Personality stage makes it so his MP card defends against Guldo's attacks. If you only have one Defence card remaining, take the hits until Guldo uses himself, then block it. This may require two or three attempts. You can also use Freiza due to his power of cutting damage down by two Life cards.

The Frieza Smiles card is a double-edged sword. When used as the first card in combat, it stops all Energy or all Physical attacks for the rest of the round, but this affects both you and your opponent.

To find the green artefact you must first go to the temple. Then go straight to the white teleport pad, when you enter the next room go south then east all the way to the wall then go north until you see a statue of a hand, then simply follow the fingers direction and you will enter a hidden room, keep walking and you will find the green artefact.

To get past level 1, you must defeat Guldo, Krillin, and Nail. To defeat Krillin, use as many Raise Your Anger cards as possible. You have a very good chance of winning if you mix some strong Defence cards with the Raise Your Anger cards. To defeat Nail, use a combination of strong Defence and get your MP to level 2; or if they have a Defence power on level 1, use it. To defeat him, stop as many attacks as possible while pounding away. To defeat Guldo you must practice awhile before attempting to win. Your first attempt will probably be a loss. To defeat him, use the strongest Defence cards you have, such as Frieza smiles, which will not allow your opponent to attack during the combat turn it is used. Wait until you have a lot of a couple of life card losing combat cards and just hack away, repeating the process until he is defeated.

Customize a deck that raises your Anger level and lowers the opponent's Anger level. The opponents on level 2 raise their Anger. Their Life deck is too high for a Survival Victory.

To win the cell personality cards you must first win the game, (beat the ladder) with every character the beat it one more time and you will win cell!

Get 75 cards to deck then add Namekian cards until you can't add anymore cards to your deck, make sure you are playing with Piccolo or Nail.

Build a deck with 75 cards in it, but dont save it. take off the level three of your Main Personality(example:Gohan, Goku, Garlic Jr....) than select another card then save it. Voila, you have a 76 card deck.

We have no unlockables for Dragon Ball Z: Collectible Card Game yet. If you have any unlockables please submit them.

We have no easter eggs for Dragon Ball Z: Collectible Card Game yet. If you have any unlockables please submit them.

We have no glitches for Dragon Ball Z: Collectible Card Game yet. If you have any unlockables please submit them.