Use the above links or scroll down see all to the PlayStation 2 cheats we have available for Dragon Ball Z: Infinite World. 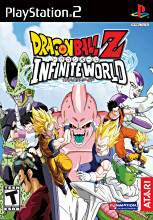 The best & easiest way to beat Syn Shenron is to keep using this combo: square, square, triangle, triangle, triangle, triangle. If your health is still at 3 bars, go to the warriors room & buy "Fighters Body" in the ability section as many times as you can. Also buy the "Senzu Bean" 4 times. Buying the senzu bean 4 times will allow you to heal 4 bars of health & ki if you hold x and press down twice. Read this carefully to understand. I hope I could help. Enjoy!

In Dragon Mission, fight Hercule with Android #18 on hard. Get in corner and let Hercule knock you out for 39,000 zeni.

When your at Warriors Training or Dragon Duel, choosr Syn Shenron, then use Dragon Thunder (Back-Circle), but after you press Backwards and you press cirlcle, immediately hold circle and before you do you have to transform into Omega Shenron (of course) and while your holding circle you'll see a bunch of thunder and/or lightning swirling around Omega, then if you let go or get hit or blasted by a ki blast it'll go away and usually thats not what you want but you can keep doing and after you hold circle, release the circle button and the thunder will go on like nothing happened. It's freakin' awesome you really have to try it!

How To Fly Backwards From The Ground

Pick anyone in dragon duel, warriors training, or any combat mission, so what you do is when your on the ground, do a backwards dash and hold the up arrow on the directional pad or hold the analog stick upward, or if your already in the air, do the same thing, but instead of holding up, hold down and you'll go right back to the ground.

Go to fighter road get the black skill most diffilculty and buy it then buy super kamamaha for teen gohan and get We Got The Power.

Unlock fighters road and in the first page when you go to pan make sure that difficulty z is unlocked. Play as teen gohan get a move contentent ki blass. And keep doing it.

To easily defeat someone all yo need to to do is this, first fill up your kai. Then when someone is about to hit you, press X right (or left - try both) then hit square, square square, square. After that, rush then press R2. And Finally they should be weak and use kamehameha. And that will be it. Or fill up your kai bar again and use your special).

Go to the majin buu saga do the mission as 18 put the game on z and go to skill select and put we got to power on max first and unlock z mode first.

How To Catch Bubbles

To catch bubbles (king kai monkey) you have to no were he's going. It may take up to a minute to do this. Well this is two tactics. The first is to run behind him directly then when he turns jump rite in front of wee he's going. The second one is to try to trap him. This one isn't all that easy. Try to trap him by the tree ot any other thing that could block a psycho monkey running with kai absorbing bananas. Lol try it!

To make your super throw powerful grab your opponent with the super throw buttons. After you have done so spin the analog sticks as fast as you can. If done correctly you will see the player you are playing with will move faster, and throw more kai! (or depending on the character hits). . And to top it all off, if you have ssj4 goku or some other powerful character it takes up about a hole gauge and a half.

How To Get Dragonballs

Go to cell saga and go to the mission where you search for a dragonball when you pass look at at your dragonball scall at the lower left corner of your screen then you'll see another dragonball that wasn't there appear!

If you want your power to be stronger, go to the warriors room and go to buy skills, then look up under the red capsule and upgrade that certain power skill. Hint: if you want your attack strength to be strong buy the ultimate power capsule and keep upgrading it until it is maxed out and you will see the results.

On dragon mission fight 3 battles then buy fighters body and viral heart disease and fried rice. Then beating dragon mission will be easy once you equip them.

Fight Goku with Teen Gohan in Dragon Mission on hard in the Hyperbolic Time Chamber a lot of times.

We have no cheats or codes for Dragon Ball Z: Infinite World yet. If you have any unlockables please submit them.

After you finish dragon mission buy it from the warriors room.

Buy all levels of the fighters body and equip.

We have no easter eggs for Dragon Ball Z: Infinite World yet. If you have any unlockables please submit them.

We have no glitches for Dragon Ball Z: Infinite World yet. If you have any unlockables please submit them.

We have no guides or FAQs for Dragon Ball Z: Infinite World yet. If you have any unlockables please submit them.