Use the above links or scroll down see all to the Game Boy Advance cheats we have available for Dragon Ball Z: The Legacy of Goku II. 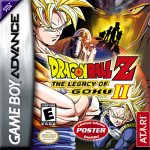 Keep using picclos speical beam cannon until you defeat him. You have to get energy from rocks.

Go to the place with snow. In the top right corner of the place you fly.

Go to the place with snow. In the top right corner of the place you fly.

Power Level Gohan (may Work With Others)

When you are out looking for Dr. Gero's lab, you fight him once before entering a save area. While in the save area don't go forward, instead go left to. There you will find a barrier with an orange "? " mark on it (which is for Goku)after you kill the tiger bandits use the Masenko wave to hit the triceratops on the other side of the gate, after you hit it, it will charge at but wont hit you (thanks to the barrier) you can punch it through the wooden area of the gate or use the Masenko wave on it till it dies. Repeat this process until you reach a desired level. (Ive gotten Gohan to level 40 with using this glitch).

If you go to Capsule Corp. To Bulmas room, you will see Bulma's mom in the living room or the kitchen. Talk to her and she will give you a cookie. You can keep gathering cookies until you have 99 of them. They will give you 5 HP each.

If you run out of energy, get to a secluded place with no enemies, or if you are in a big battle, get to a place where the boss can't get to you, and wait. Eventually your character will do something to recharge their energy. This list describes what for each character:
Gohan: Sits on the ground to rest (recharges faster if he is close to something he can sit & lean against)
Piccolo: Floats in the air and begins to enter a Namkian Meditative State (Meditating)
Vegeta: Stands still and holds out a Saiyan Energy Orb, it begins to glow and cause a slight wind that recharges Vegeta's Ki Energy
Trunks: After a while of standing still, Trunks gets out his sword, sticks the tip of it in the ground, and leans on it
Goku: Goku gets down on the ground on his hands and knees and then begins to do push-ups
Hercule: Hurcule does absolutely nothing. He just stands there the same way all the time, but in doing so, he regains his normal human energy, not Ki Energy.

During the battle against 17 hide behind the tree were he can't attack but you can.

Talk to a normal dog and the first three times he will say Woof! Then when you talk to him the fourth time he will say Would you rub my tummy please?

How To Make Your Character Glow

Easy Way To Beat The Androids With GoHon

Later in the game Yajirobe will stop giving you senzu beans.To get more talk to Korin at his tower(use the flight circle on Kami's lookout) and he'll ask you for three fish. To get fish go in an area where water is(ex. lake in triceratops jungle) and fight enemies. If water is in the same screen as you are in, the enemy might drop a fish. Give three fish to Korin and you get a senzu bean.

To unlock the statues for Gohan, Vegeta, Trunks, and Piccolo, get each character to level 50. Then, find each character's level 50 barrier, and brake it. Get to the end of the tunnel, and find the statue. The statue will go to the capsule corperation where you can admire it whenever you want.

When you are battling, and depleted your energy bar, (green) (Ex. battling Triceretops King) run around enough and it will show up.

To use the Map hit the R button.

To use the Scouter hit the select button.

After collecting all twenty five Golden Capsules, see Dr. Briefs. He lets you keep one. When used through the Item window, it takes you back to the World Map if you are standing outside. It will not work inside buildings or caves. West City: 5 Warlord's Domain: 2 Triceratops Jungle: 2 Southern Continent: 3 Northern Mountains: 6 Outside Gingertown: 2 Gingertown: 1 Tropical Islands: 1 East District 439: 2 Master Roshi's Island: 1

Get to Level 50 with Gohan, Piccolo, Vegeta, and Trunks. Go to the character specific gates marked with 50 to collect trophies. The locations are as follows:

After you complete the Cell Games, Hercule (Mr. Satan) will become available.

Save and reset, then chose another player. Switch back and you should have full health.

During the game, hold down A, B, Select, and Start all at once. But remember, you must keep them held down.

We have no unlockables for Dragon Ball Z: The Legacy of Goku II yet. If you have any unlockables please submit them.

We have no easter eggs for Dragon Ball Z: The Legacy of Goku II yet. If you have any unlockables please submit them.

We have no glitches for Dragon Ball Z: The Legacy of Goku II yet. If you have any unlockables please submit them.

Beginning Of The Game Guide

Submit a cheat for Dragon Ball Z: The Legacy of Goku II