Use the above links or scroll down see all to the PlayStation 2 cheats we have available for Dragon Quest VIII: Journey of the Cursed King. 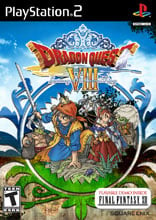 This is on your way from Ascantha to Yanguses hometown Pickham. You see a strange building on the way, go up the building from the side and you'll see a man named Morrie, talk to him, he'll seem to not notice you at first so walk away and when he calls for you, go to him. He'll ask you a favor, you have to collect three monsters;Lonely joe back at the abbey, Squigles at the beach near Red's place, and Smiles at the Trodian entrance. Once you have all three, go back to Morrie, he will take you into the building, and take you downstairs to 'THE MONSTROUS ARENA'. He will then ask you if you want to own your own monster team, accept. Your team at the time will be those three monsters you caught for Morrie, but you can find the other monsters for your team to make the team better. There are several levels of the monster arena, as you beat them you will soon obtain the ability to call your team to batle for three turns [this is a litle bit into the arena], the top monster I'd recomend is Talos on Neos, he is HRAD, but so worth it.

How To Unlock Dragovian Items

Get Rich Or Die Trying

Like the title says, you can get rich or die trying. Head over to the Island of Neos and outside in the desert you'll find gold Golems and they each give you 400 gold. But I'm warning you these golems are real hard to beat, especially if they're in multiple numbers. But hey, at least you'll buy whatever you want in the game faster since you don't get that much gold in the whole game.

The Truth About The Hero

Dragon Soul is really powerful. It can do at least 300 points of damage. The only way to get it, is to raise the hero's level to 65. Dragon Soul costs a lot of MP. It doesn't matter how high or low some of your stats are. Dragon Soul can only be obtained by getting to level 65.

First of all, you must have Giga Slash, which is obtained by getting either the Hero's Sword or Courage Stat to 100. After that, get the other stat to 100, and you will get Giga Gash (For example, If you got Giga Slash with 100 Sword skill points, then get 100 Courage points, or vise versa).

In order to obtain Giga-Slash as a battle ability you must raise the hero's sword status to 100.Giga-Slash is a very powerful move, but costs a lot of MP.

Your best bet is to always make sure your characters are the strongest they can be. Before taking on Rapthorn, Dhoulmagus, Jessica, or the dog, make sure that each character has leveled up to a point where magic and health are not a problem. Angelo needs to be at leve 30 to get multiheal, and that helps a great deal in fighting any boss. The Hero, needs the best weapons and shields becuase he will do most of the fighting. If you can, sythethisize the Liquid Metal Sword. Your best bet when in a fight, have Yangus and Hero attack while Angelo is healing and boosting defense and Jessica casting Oomph and boosting Fire and Ice defens.

We have no cheats or codes for Dragon Quest VIII: Journey of the Cursed King yet. If you have any unlockables please submit them.

We have no unlockables for Dragon Quest VIII: Journey of the Cursed King yet. If you have any unlockables please submit them.

We have no easter eggs for Dragon Quest VIII: Journey of the Cursed King yet. If you have any unlockables please submit them.

We have no glitches for Dragon Quest VIII: Journey of the Cursed King yet. If you have any unlockables please submit them.

Recipes for the DQ-8 Alchemy Pot

Location of Items from All Stores in DQ-8

Use of DQ-8 Skill Points

Submit a cheat for Dragon Quest VIII: Journey of the Cursed King