Use the above links or scroll down see all to the PlayStation cheats we have available for Dragonball GT Final Bout. 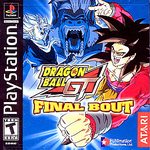 To Play As SS3 Gotenks

Beat the game with regular Trunks with sweat coming down his face 9 times. But u cant go out of the yellow line into the red. You've got to stay in the yellow and after u beat the game with him 9 times press select 9 times and gotenks should show up

At character select screen, hold down select and square until match starts.

Beat the game 7 times on hard with regular trunks 9 times. You must not use any continues. And you must have a near perfect for each person you fight. After doing so, at the character select screen in training or 1 player mode, highlight regular trunks and press (select) 9 times and Gotenks should appear.

To do this cheat, when your picking a fighter on the Vs. menu hold select while pressing x and in battle your character will only show his her outline.

While being Pan, stand near the second player the press toward,back,down,up, and imedately hit square. If entered correcty she will to a really powerful combo.

When choosing vegita in the training hold L1 + Triangle. When it loads all you gotta do is press Triangle to shoot and it will shoot friezas! Death bomb, but with vegita.

First, put the skill level on hard. Get Super Saiya-Jin Goku Level 4 and the rest of the hidden characters. This includes Gotenks. Note -- You cannot lose a match and you need near perfect when getting all the hidden characters. Once done, beat the game on hard 7 times with Majin Buu a.k.a. Original Buu. You need a near perfect doing this and no losses. After that's done, beat the game 15 times on hard with Pan. You also need a near perfect and no losses here too. Beat the game 6 more times with Chibi Goku with a near perfect and no losses. 8 more times with SSJ to the 4th power Goku. You also need no losses and near perfect every match here too. Finally beat the game 3 times on easy with Majin Buu. On the third time you need to continue 4 times by losing to your first round opponent. And get a perfect on every one after that. Except for when you fight Super Baby. You need to half your life bar at 1/4 the way, and finish Super Baby with a strong 'Ki Attack' (or in other words ---- a strong knockout ki blast.' i.e. Goku's "Chou Kamehameha," but for Buu! After that, go to the character selection screen and highlight Majin Buu. When you do that, press the select button 15 times and Ubuu will appear.

Press right, left, down, up. Then press triangle or press left, right, down, up, triangle, and cell will release something that can be more powerful than a spiritbomb or selfdistruct!

All Hidden Characters (except Bebi Vegeta)

While in battle hit Forword, Back, Down, Up, Circle slowly and Veggeto should do a really fast kick.

Get Bhu in the battle (p1). In the battle, press right, left, down, up, and triangle.

Basically the same as Vegeta's Explosion. Just press Foward, Back, Down, Up, Triangle. It does massive damage, but takes a while to charge up.

Do The Spirit Bomb (Henkidama)

You must have Normal Goku and by normal I mean not Super Saiyan. Hit Foward, Back, Down, Up, Triangle slowly.

At the title screen, press L1, L2, R1, R2, Start. Then, press Select after choosing a song to view the lyrics and additional song information. Note: For the Japanese version of the game, press L1 + R1 + R2 + L2 at the presentation screen.

We have no unlockables for Dragonball GT Final Bout yet. If you have any unlockables please submit them.

We have no easter eggs for Dragonball GT Final Bout yet. If you have any unlockables please submit them.

We have no glitches for Dragonball GT Final Bout yet. If you have any unlockables please submit them.