Use the above links or scroll down see all to the PlayStation 2 cheats we have available for Dynasty Warriors 4 XL. 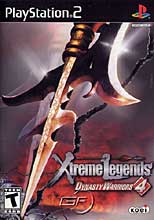 To get this handy item, play Jiang Wei's Legend on any Difficulty Level. Defend the gates til Liu Chan appears. DEfend the gates while preventing him to leave the gates to surrender to the Wei Army (hit the gong that's near the exit he's near to close it, but it also causes the other to open), and don't leave. Kill all the officers as fast as you can. A message will appear saying an item has appeared, but it's behind the gates that you're protecting so make sure you have a horse near you to get it and make sure that Liu Chan isn't near, or it'll be difficult to get. This handy item, when near death (the Health Bar is red) will increase your Attack x2.

When you edit a character, you need to choose a weapon, each holding the movements and attacks of a certain character from a game. Here's a list of those weapons and the motions for them to create the character you wish:

Getting Duels To Appear In Legend Mode

To get a duel to appear, you need to be on a horse of any kind. Once on one, you need to get to an enemy officer. A sub-movie will appear, showing that officer, on the upper right part of the screen you'll get a message, press X and you've accepted. Best place to try is Zhoa Yun's Legend with a Harness equipped. It even works on Edited characters! If you win the duel, the morale of your team will increase, you can obtain items to increase your basic ability, and extra points are awarded when the stage is cleared. If you lose the duel, the game is over, so watch out.

The more missions you complete, the more chances this will happen. In a Kingdom that had a Monster description on it, you may come across a Juggernaut (as seen in Yue Ying's Legend), that would be the monster. You won't get a notice on these, but they'll be near an enemy officer. If your character is not strong enough, try to avoid it as much as possible. Sadly, though, you get nothing if you do destroy them.

Hint: to do this you must be on horse at all times during the whole game. Use the shadow rider, that way you wont get hit.

For your bodyguard to stay alive in hard levels make sure you level up them up on easy mode or beginner. Make sure they kill half of the generals you kill that way they get more bodyguard points.

This only appears on missions that involve a monster in the area's description. When in an area that involves a monster, a Peasant will appear saying that a monster is causing trouble, and asks you to take him out. There are two kinds:
Main: An Elephant with a random Enemy Officer (excluding Lu Bu)
Rare:Lu Bu himself. You'll know when you hear the song change. He'll be difficult to beat so make sure you're abilities are high and your weapon is high (around 8-9). After you beat him, you may get an item. It may hold a rare item. If you face him, and beat him on your first try, then you did real well for he's the strongest warrior in the Game!

Beat Lu Bu's duel record in challenge mode. It will remove the no time limits.

On Meng Huo's legend close all the enemy gates without letting your gate getting sealed. The item will be near Sima Zhao.

In order to get Pang Tong's Great Phoenix, you must use Pang Tong in his legend mode on an expert difficulty. Quickly, seal the gates ate the northwest and southwest. Then, seal the gate in the arsenal on the west. Next, defeat Yue Ying. Seal the gates at the south and north and kill the guard captains at both places in order to gain the crossbow machines. Then, kill the guard captain to the east to take over the arsenal there. The cloud ladder should, now appear. A bunch of enemies should show up, but they will soon convert to you. Do whatever you can to guard the cloud ladder. Soon after, the cloud ladder will be set. A cut scene will appear. Afterward, get 450 KOs, and the "Level 11 Weapon" message will appear.

In order to get Jiang Wei's Prodigal, you must play as Jiang Wei in his legend mode on an expert difficulty. First, ring the gong at the west, but ignore Jian Ge Gate. Go kill Xu Zhu and Xu Huang VERY quickly. Liu Shan should now appear. He will move toward Zhang He and Cao Ren. Kill both of them before Liu Chan surrenders to them. Next, Liu Shan should head toward the bottom right of the map. Seal the gate at the bottom right. Then, defeat Deng Ai and Zhong Hui. Go back and meet with Liu Shan. The "Level 11 Weapon" message should now appear.

In order to get Xiahou Yuan's Ogre Rod, you must play as Xiahou Yuan in his legend mode on an expert difficulty. Make sure that no enemy troops pass through the gate you are blocking until Xiahou Dun appears. You also need 300 KOs.

Play as Dong Zhuo in Legends mode. Let all the officers go. Then do nothing untill Yuan Shao appears. Find and kill Yuan Shao as soon as he appears. The item will appear in the northeastern corner of the map. Get it and finish the stage.

Play as Zhuge Liang in Legends mode. Do exactly as instructed by the game. Every time it tells you to kill Yue Ying, do it immediately. Just before you kill her fot the last time, a secret item message will appear. Find it and finish the stage.

Play as Dong Zhuo in Legends mode. Let all the officers go. Then do nothing untill Yuan Shao appears. Kill Yuan Shao as soon as he appears. The item will appear in the northeastern corner of the map. Get it and finsh the stage.

The Art Of War:

Play as Sun Jian in legends mode. Do nothing until Lu Bu arrives. Kill Lu Bu. The item appears in the fortess where the ambush is located. The Art of War has all ability boost items (armor, Imperial Seal, etc.) last for double the time.

Play as Sun Quan in Legends mode. Kill Zhang Liao four times. A supply team will appear on the lefthand side and run fot the northwest gate. Kill the Captain and claim your item. Finish the level and you will have Musuo Armor.

Play as Liu Bei in Legends mode. Kill all the officers. Do not kill the peasants. The saddle will appear. In the middle of the stage.

Play as Guan Yu in Legends mode. Protect the carriage. When Yu Jin appears, kill him. The item will appear in the southwest corner of the map.

Play a Huang Zhong in Legends mode. Kill Guan Ping and Zhou Cang. The item will appear the far western side of the level.

Kill all three Xiahous, He, Wei, and Hui, in any order in less than two minutes, or before Zhuge Liang attacks Wei Yan.

Play Zhou Tai's legend mode on expert difficulty. This is very hard to do. You must save Sun Quan, his 4 sub-generals, beat Liu Yong, and Tashi Ci, and get 500 K.O.s.

Do Dian Chan legend mode on expert level. Then kill Lu Bu. After killing Lu Bu, kill Dong Zhuo. After that, kill the rest of the enemy officers. Be sure to kill Hua Xiong first. (Last General)

The game must be on expert difficulty. In Lu Bu's legend mode rack up 2000 K.O.s. Of course you must already have his level 10 weapon for this to work.

On expert difficulty, play Ma Chao's legend mode as Ma Chao of course. You must have his level 10 weapon already. Get 500 K.O.s, but don't stop killing enemies. Try to lead in amount of K.O.s 5 times in a row. Since it is rare for a game controlled character to exceed 250 K.O.s, 500 is the target.

We have no cheats or codes for Dynasty Warriors 4 XL yet. If you have any unlockables please submit them.

To get this item, play Cha Ren's Legend on any Difficulty Level. Defeat Han Dang and get to Niu Jin, on the way, kill as many enemies as yo can so his Morale increases, but don't kill Gan Ning til a message appears saying an item has appeared. Defeat Gan Ning before he kills Niu Jin, get the item and finish the stage. Best if you have a horse with you so you can get it quickly and help Niu Jin from Zhou Tai. It may take a few tries but it'll be useful for your Bodyguards.

To get the Shadow Harness, play Cao Cao's Legend on any Difficulty Level. Kill all the Wu Generals. You will get a message saying an item has appeared. The Shadow Harness is the best Harness in the game, as it allows you to never be knocked off the horse.

To unlock the war drum play as Meng Huo legend mode on any difficulty. You must defeat all gate captains and keep yours alive.
Tip: an easier way to do this is to do a 2 player gameplay because there would be to many troops and meng huo is not that fast exm if he goes to kill a gate captain a group of enemies would come and kill your gate captain and if you wonder why the gate captain dies so fast is because he wont fight back so this is why 2 players are easier have 1 person guard the gate captain and the other person kill the enemies gate captain when you kill all of them a valuable item will appear get it and complete the stage. Make sure you have a horse when you do this mission because meng huo is extremely slow.

We have no easter eggs for Dynasty Warriors 4 XL yet. If you have any unlockables please submit them.

We have no glitches for Dynasty Warriors 4 XL yet. If you have any unlockables please submit them.

We have no guides or FAQs for Dynasty Warriors 4 XL yet. If you have any unlockables please submit them.