Use the above links or scroll down see all to the PlayStation 2 cheats we have available for Everquest Online Adventures: Frontiers. 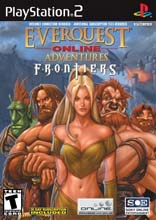 To kill a wasp with out getting hit, run on a rock and hit the wasp. When you are on the rock, they cannot hit you.

Saved By The Guard

You need to be a level 12 or higher, a Druid, and have the Spirit Of The Wolf spell. This spell can make you faster. When you attack something strong and need to escape, use the spell and run in a straight line. In about a minute, look back and your opponent will have disappeared. You can use this trick to escape from enemies.

If you have enough distance from any enemy or guard that is chasing you, you can lose them by running along the invisible boundary wall near the tops of mountain ranges. Run to as high up as you can on a mountain, then turn and run left or right along the invisible wall that prevents you from climbing any higher. NPCs have trouble running along this wall and this will slow them down. If you are far enough away from them (bow/crossbow range is acceptable), they will never catch up. After about a minute of running along this wall, your enemy will disappear and warp back to where they are bound.

Go to Freeport or a similar desert city. Find any cactus. Stand with your back directly against the cactus between the huge spines. Pull something to you without moving, and the monster will attack but you will take no damage. As long as you do not move, you cannot take any damage.

Play a character in the wizard class that is level 34 with the Evac to Fp, Sslathis Gate, and Melton Portal. With these teleportation spells, you can help people with their quests. Before doing so, you collect their money by offering the right price for the quest. Do not make it too high or it will not work.

This trick requires the help of a higher level player. Your friend will need to be at least 10 levels higher that you. The amount of levels higher varies, depending on the enemy. Make sure you are not in a group, or you will not get any experience. Have your friend attack an enemy that is green to him, but red to you. He must only hit it once. Taunt is a good ability for this, because it does no damage, but gets the enemy's attention. While the enemy attacks your friend, you can attack the enemy, and it will not attack back (because your friend is the higher level opponent). The enemies life will slowly go down. It will eventually die and you will get a lot of experience because you killed it.

We have no cheats or codes for Everquest Online Adventures: Frontiers yet. If you have any unlockables please submit them.

We have no unlockables for Everquest Online Adventures: Frontiers yet. If you have any unlockables please submit them.

We have no easter eggs for Everquest Online Adventures: Frontiers yet. If you have any unlockables please submit them.

We have no glitches for Everquest Online Adventures: Frontiers yet. If you have any unlockables please submit them.

We have no guides or FAQs for Everquest Online Adventures: Frontiers yet. If you have any unlockables please submit them.