Use the above links or scroll down see all to the PlayStation 3 cheats we have available for Fallout: New Vegas. 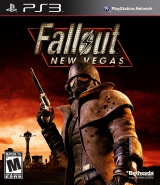 After your restore law in Primm (either with NCR or With the sheriff) go back to the casino and talk to the raiders who show up (however you please). Then leave Primm and return 3 in-game days later and buy chips and the cash them in. You get the caps and keep the chips and you can trade in the chips however much you want.

There are many commissaries in lonesome road, they recycle themselves when they get below 100 caps, back to a full bank of 6,000. You can sell everything you want until you empty it, then close, reopen, repeat until you have a million plus caps like I did. They look good next to the 37 gold bars.

If you go to the strip and go into Tops you can or even in freeside you can gamble in blackjack. Buy 200 chips and go to a table. Save. Then while you are playing bet max. And every time you win stop playing and save again. Every time you lose all you have to do is load. But make sure you save before you play.

Ways to get Into the Strip

Once in freeside, go talk to the woman in the atomic wrangler, if shes not there wait a couple hours. Ask for work, also have the "Lady Killer" perk. She will say she needs debt collected, all of them are in freeside. The lady killer perk is when you talk to Lady Jane, you can persuade her to fork over the caps, plus she gives you a caravan location, I think there is 7000 or so caps inside. Kill everyone at freeside except: The Kings, The Silver Rush people, And Mr. House's Securitrons. Someone has a C4 charge sell it for 548 caps, take a job at the silver rush guarding the door, you will earn 200 caps, the next job there is also 200 caps. OR if you have awesome weapons, or a death wish kill the Securitron greeter take the key, RUN, or you will DIE. If you want to kill them all visit nellis air force base, kill raquell take the grenade launcher, really fast one, not the ordinary grenade launcher! These ways only take a few minutes! OR do a 100 jobs for the king and he'll get you a passport and you can use Rex, his dog.

Go to Vault 11 find the overseer's password for his/ her terminal fight all the robots in the basement and find another terminal in a small room and click on the last entry on the terminal as much as you need to get to level 30 (probably 5 seconds).

Go to New Vegas, then go to the Silver Rush (there is a big sign that says "Silver Rush") There is a bathroom in the back of the shop. Go through the unlocked door and then go and get a gun off of the table. Take it to the bathroom and then put it in your inventory. You will not get caught and you can get all the guns you want.

I have uncovered the ultimate tip in fallout, new vegas. Down in the south east corner of your map, (Accessed by pip boy) there is a village called cottonwood cove. In cottonwood cove there is a building with a fence on one side of it. (Possibly containing slaves if not yet freed. ) go around to the side opposite if the cage to the side that has stairs leading up the side. Inside you will find a man by the name of Aurelius of Pheonix. Talk to him. He is offering to reward you for each NCR trooper you slay. You must bring back dog tags as proof. Anyway. You have the option to barter instead for weapons supplies. Do this. (Barter of 35+ required. ) after selecting this don't exit conversation. Keep selecting this. Each time you select this conversation action, you will receive 69XP. Rapidly press X to keep selecting this for infinite XP. (Note: once you exit this conversation, it is no longer accessible) you can gain more than one level at a time. I have already went up 10 levels, now level 41. Good luck gamers.

Goto Vault 11 (northwest of Boulder City) and find the overseers password. Go through the Reactor level to find the password in the Atrium (on the podium: hologram) goto the overseers office and go down to the sacrificial chamber. Watch the movie and kill the robots the goto the computer and click the third option FIRST and continue to click it until desired level. (Note: usable once if you exit the computer or pick another option byebye glitch. ).

If you can get your speech skill to at least 50 or higher, you can persuade Old Ben to offer his escort services to the local bar. If you succeed in his Speech Challenge, you gain 61 XP. If you follow him back to the bar afterwards and wait until he sits down, you can speak to him again and redo the same Speech Challenge over and over again for unlimited XP. You can find Old Ben sitting by a fire close to the King headquarters in Freeside.

We have no unlockables for Fallout: New Vegas yet. If you have any unlockables please submit them.

We have no easter eggs for Fallout: New Vegas yet. If you have any unlockables please submit them.

(Must have barter or speech at 25) Do not leave Goodsprings. After you get finished doing the quest with Sunny Smile follow Joe Cobb and help him take over Goodsprings. Kill Ringo and report back to Joe Cobb and tell him you killed Ringo and he should say you need supplies from town. Kill Joe and the powder gangers and goto talk to Chet. Tell him the Powder Gangers need supplies and use your barter or speech to get the supplies, leather armor, 30 9 mm rounds, and 25 xp. Every perk that is unlockable in level four and up you get to keep when you leave Goodsprings and pick other perks when it takes you back down to level one to level you up.