Use the above links or scroll down see all to the Game Boy Advance cheats we have available for Final Fantasy IV Advance. 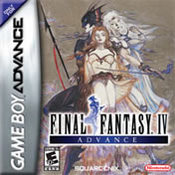 Go to a place where you can find the Summoner monster (eg Giant of Babel). When you find one, kill everyone except the Summoner. When the rest of the enemies have been defeated, let him summon more enemies, and then attack them. Repeat this process until you feel you are ready to move on.

If your battle mode is set to Active (meaning that while you make selections for magic or items, the enemies can still attack or do magic), you can organize yourself so that you do not have to take as much time in battle. Go to the items or magic screen when you are outside of battle. Press the A button on one of your available choices, and then move your control pad to one of the other choices and press A. These two items or spells will switch places. This is good because you can organize your spells into categories, like Fire, Fira, Firaga, and Firaja.

How To Get To Underworld

Once you recieve the Magma Stone, this is your ticket to the Underworld. Fly to the village of Agart (from the City of Baron fly directly south. If you cannot get to Baron open your minimap with Sight). Walk up and enter the garden in which the deep well is. Stand in front of the well, and press A. Enjoy a small clip, where you will watch the north mountains open up into a crater. From there, exit the village, enter your airship the Enterprise, and fly up to where the crater is. Press A when you are directly over it.

How To Beat Dark Cecil

When you reach the part of the game where Cecil becomes a Paladin, you will have to battle the old version of yourself. This battle is unique. The dark Cecil will keep using his dark attack, but don't even press any buttons. The battle will go on like this for a few turns and then you will win. Just keep in mind that you CANNOT attack or use items, magic or anything. Just sit there and do nothing while you enjoy the fact that you are going to win without doing anything!

Hold the L and R button simultaneously to flee from monsters in a battle. *Note: there will be a delay if the monsters turn comes before any of your party members, in which case wait until they are finished attacking.

When you are in a part of the game where you can't continue on to the next part because your party is not strong enough, then here is an easy way to gain experience: kill all of your party members except for one, and then use that charcter to do all the battling while training. He or she will gain all of the experience for that battle, thus growing levels more quickly. Repeat this process for all party members.

After you beat the game once, the camara will center onto a rock shaped like a face in the surface of the moon. The rock will explode and a new dungeon will open. Save your game and you'll be able to go inside. There are four kinds of stages: Normal, Event, Puzzle, and Remembrance.

After you beat the game for the first time, the Music Player will have become avilable under the "Extras" option in the title screen.

To obtain the Excalibur you must first go to the Cave of Summons in the Underworld and obtain the Rat Tail on B4F. Once you are able to hoist your hovercraft onto the Enterprise, drop it off in Mythril and use it to reach the Adamant Grotto southeast of the town. One of the men there will trade your Rat Tail for a piece of Adamantite. Take the Adamantite to Kokkol's Smithy in the southeast corner of the Underworld, and give it to him. After you've returned from the moon, your sword will be ready and you'll be glad you went through all the trouble because of Excalibur's extreme power.

When you're inside the Giant of Babel make sure you steal a lot of sirens from the Searchers and Right Arms (you should steal at least 10) before going to fight the CPU, becuse if you don't they'll be a lot harder to get later. When you get to the Lunar Subterrane, go inside the small room that has a red fang in the treasure chest and use a siren. You'll be taken into a fight with 5 Flan Princesses. At the beggining the will only say "let's dance" but this is your only opportunity to kill them because they will start attacking and cause berserk on all of your characters with no way to heal. If you can defeat them, you will get the Pink Tail which you have to give to the man in Adamant Grotto in Exchange for an Adamant Armor.

There are four summons that Rydia can learn only if she's given an item with the name of the summon and a white little circle next to it. These items are very rare ti find and must be dropped by an enemy. They are the following:

We have no cheats or codes for Final Fantasy IV Advance yet. If you have any unlockables please submit them.

We have no unlockables for Final Fantasy IV Advance yet. If you have any unlockables please submit them.

We have no easter eggs for Final Fantasy IV Advance yet. If you have any unlockables please submit them.

We have no glitches for Final Fantasy IV Advance yet. If you have any unlockables please submit them.