Use the above links or scroll down see all to the Wii cheats we have available for Fire Emblem: Radiant Dawn. 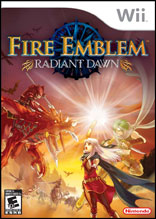 In part 1 chapter 4 there is a skill called beastfoe 8 spaces down from the top left corner. Soathe will be able to get it the first time you move over the space.

In part IV, level 3, (aka the "desert" level) there are lots of cool things hidden in the sand. There is a super powerful dagger located 9 spaces left and 10 spaces up from the bottom, right-hand corner. Also, there is a miniature 3-space cliff near the upper-right hand part of the battlefield (it faces "southwest"). On the "top" of the cliff (the upper-right-hand corner) there is a hidden daemon card. Make sure to pick these up!

In part 4, in the desert level, there is a hidden ULTIMATE DAGGER. It does tons of damage but requires SS level dagger to use. I don't remember exactly where I picked it up, but just walk on the spaces near the intersection of the eastern mountains, the horizontal ridge, and the lower part of the screen. It's completely worth walking around for a while and even if you can't use it you can sell it for a LOT of money so try to get it.

Love Is In The Air

Support is good for more than one thing. At the end of the game, if Micaiah has "A" rank support with Sothe, she will marry him. Here's a list of all the characters that can marry each other:

Gatrie is pretty good from the start, but he can be nearly invincible. All you have to do is level him up as much as possible, so give him a master crown or two. Plus, give him lots of items that raise defense. If you do this right, by the time he's a level 10 marshall, the only enemies that can hurt him are bosses and mages!

How To Get Meg

At the start of Part 1 Chapter 4 go to the info screen and talk to Meg. She is a Level 4 Armor Sword. Her skill isn't to good when you first get her. So she might have a lot of armor but she still can get hurt

In Part 3 chapter 10 your goal is to rout the enemy and keep Elincia alive, the easiest way to do this is to rescue her with a gold/ silver night or a marschall, the take her to the bottom left corner of the map and rout the enemy, In this leve there are few things that hit her, but there are 4-5 bow paladins near the boss that hit 30's on her EACH!

In Part 1 chapter 4 (the first laguz encounter) there is a hidden Master's Crest. Go to the bottom right of the map then go 2 spaces left and 1 space up.

Most bosses have items like gems or skill scrolls, however they will not always give it to you when you kill them, only when the item is red. To get these items take Heather (acquired in part 2 chapter 1) or Sothe (acquired in part 1 chapter 3) and go up to the boss and use the Steal technique, only rougues have this skill. Word of advise for this first press attack and make sure you can withstand the hit the boss will throw at you.

We have no cheats or codes for Fire Emblem: Radiant Dawn yet. If you have any unlockables please submit them.

Part 2, Endgame: View the info conversation before starting the level.

Part 2, Chapter 3: View the info conversation before starting the level.

Part 2, Prologue: Speak to him with Marcia.

Part 2, Chapter 1: Speak to her with Brom or Nephenee.

Part 3, Chapter 8: Speak to him with Ike or Reyson (Ulki joins too).

Part 1, Chapter 4: View the info conversation before starting the level.

Part 4, Chapter 4: Speak to him with Rafiel.

Part 4, Endgame: View the info conversation before starting the level.

Part 4, Chapter 3: Move Micaiah, Lethe, or Mordecai onto the tile 11 up & 1 left from the bottom-right corner.

Part 1, Chapter 5: View the info conversation before the level.

We have no easter eggs for Fire Emblem: Radiant Dawn yet. If you have any unlockables please submit them.

We have no glitches for Fire Emblem: Radiant Dawn yet. If you have any unlockables please submit them.

Created by: Burning Down Chicago. Read the full guide...