Use the above links or scroll down see all to the Game Boy Advance cheats we have available for Fire Emblem: The Sacred Stones. 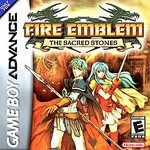 In Lv 19 Last Hope there is a secret spot right near where the king is. GO right, then you will see where you go up then right three steps. Get someone to hold the members card to go into the shop. There is crests, a barrier, and a physic.

If you want great magic train Ewan to a druid to use great dark magic lv 20, and train knoll to a summoner lv 20 so he can summon great phantoms to attack with!

Always make Gilliam a general. He is no good as a great knight. He also has a special skill that is better than the great knight.

After you've completed both Eirika's and Ephraim's route, go through the game again. This time, a new class is open to the rookies (Ewan, Ross and Amelia): the Super rookie class. When they reach level 10, they will promote and you will see that they can remain in their current form. Choose that form and train them until level ten or higher (just like any unpromoted class). Use an promoting item and they can become super rookies. For example, ewan can remain a pupil even after promoting once. Train him to level 10-20 and use a guiding ring on him. He can promote to a super pupil and can use all three types of magic. Meanwhile, super recruit (Amelia) and Super Journeyman (Ross) gain crit hit rate bonuses. This offers an alternative class to those three.

Get Seth The Silver Sword

After you beat the game, creatures will start popping up everywhere, and you can fight them to gain experience. The dotted line at the top of the World Map-it's a ship crossing-will connect two places. The one on the right is Melkaen Coast. Usually Gorgons or Cyclops will form there as the boss. The map is very long, and kind of wide. You start out on the bottom right hand corner of the map. Usually there will be fog covering the battlefield, but sometimes there isn't. If there isn't, scroll to the very top right of the map. In a densly forested area by the coast, an Elder Bael lurks, holding a rare item. It will ALWAYS have a good item, but getting to him is tough. It's usually stat items (Dragonshield, Energy Ring, stuff like that), but sometimes he will have an elixir, which is still good. I'd suggest using a flying unit with HIGH Defense and Avoid (Cormag or anyone else who flies, just put a Fili Shield on them) to make their way across the right side of the screen, trying to avoid the Elder Baels in the Mountains. Knock the spider out and GET OUT OF THERE before the surrounding units find out what happened! Tada! A free rare item!

After Capter 8, Eirika and Ephraim part. Choose Ephraim's path. It is easier than Eirika's. Also, on Turning Traitor, use Tana to talk with Cormag and get him on your side.

Crests are things that will evolve a character usually when they are levels 10 and up. So you should get items that might be crests and evolve characters to higher stats. Like a Knight to General or a Great Knight.

After competeing a majority of the game, you'll get the "Sound Room" under extras. In here you'll be able to listen to songs you unlocked and the pictures you've unlocked during your adventure.

At the beginning of all chapters, there is a scene explaining what the chapter is about. If you've already seen it or don't care, press START to skip it. You can also do this with any scene or to make someone stop talking.

After completing the final chapter, go to extras and click map. Choose a finished game. Complete the Tower of Valni, Lagdou Ruins, or monster skirmishes to earn secret characters. Those characters are Glen, Selena, Valter, Riev, Caellach, Fado, Ismaire, Hayden, Orson, and Lyon. They are all very powerful and carry strong weapons. They can be leveled up easily by fighting strong enemy units.

We have no cheats or codes for Fire Emblem: The Sacred Stones yet. If you have any unlockables please submit them.

We have no unlockables for Fire Emblem: The Sacred Stones yet. If you have any unlockables please submit them.

We have no easter eggs for Fire Emblem: The Sacred Stones yet. If you have any unlockables please submit them.

We have no glitches for Fire Emblem: The Sacred Stones yet. If you have any unlockables please submit them.

What Classes to Change to

Submit a cheat for Fire Emblem: The Sacred Stones