Use the above links or scroll down see all to the PlayStation 3 cheats we have available for Fracture. 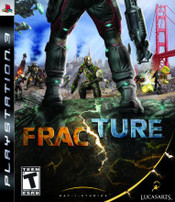 Here is a pretty cool cannon trick. To do this you must first go to the weapons testing facility, then go over to the cannon, now direct the cannon so it's facing the lighter blue spot, and it's as far down as it goes. Now step on the yellow spot if you did it right the lighter blue spot will suck crates out of the cannon this is a never ending cycle.

(By know you've probably noticed that the black widow is my favorite weapon). Here is another cool BW trick. You still need 25 data cells to unlock the BW. For this trick you must first go over to the platform with the BW, grab one and then go over to the darker blue button and drop one box. Go over to it, then fire six BW bombs on it. Then load it into the cannon. Now fire it with the green button, now you have to be quick, when it is still in the air press square and watch the fireworks!

Here is a cool black widow trick. First you must have 25 data cells to do this. Go to the weapons testing facility, go over to the platform where the black widow, ST-4, and vortex grenades are located. Then grab a black widow and go over to cannon loading buttons are, then fire one black widow bomb on six crates. Then go and load them into the cannon. Now press the green button to fire the cannon, the crates should scatter once they do press square and watch the show!

Back Of Weapons Testing Facility

To get to the back of the weapons testing facility (10 data cells) you must destroy the two big glowing columns. To do this you must first lower and raise the ground around the cannon to get it facing in the direction of the columns. Then you must stand on the darker blue spot to drop crates on the lighter blue spot. Once you've dropped as many boxes as possible (warning red ones explode) and you've got the cannon facing a column press the yellow button to load the cannon ( it loads like a lodestone rifle). Then when you have as many boxes as you can (or enemies! ) loaded into the cannon stand on the green spot to fire it a couple of times then if you hit one redirect the cannon towards the other column and repeat. (sometimes you will get lucky and hit both columns at the same time). Then when both columns are destroyed , go up to the building where the columns were you will see a flashing green light under it is a doorway go inside and on the other side there will be good guys there ( but don't get excited they just run around in circles)and four weapon crates. When you try going back out you will find out it's a trap with some pacificans on the other side be careful.

Data cells are spread out in all the missions/levels there a total of 100 of them they unlock the weapon testing facility and the weapons and vehicles in it. The data cells are purple squares, you need ten to unlock the weapons testing facility. If you go to campaign and go to mission select at the bottom of the screen for every level it will tell you the number that you have and the number in the level. During gameplay if you pause the game at the bottom it will tell you how many you have out of 100.

Press Start to pause game play, then press Up, Right, Left, Down, Up, Left, Right, Down. A sound will confirm correct code entry. Your appearance will change when the game is resumed.

We have no easter eggs for Fracture yet. If you have any unlockables please submit them.

We have no glitches for Fracture yet. If you have any unlockables please submit them.

We have no guides or FAQs for Fracture yet. If you have any unlockables please submit them.

We have no achievements or trophies for Fracture yet. If you have any unlockables please submit them.

Submit a cheat for Fracture