Use the above links or scroll down see all to the PlayStation cheats we have available for Gauntlet Legends. 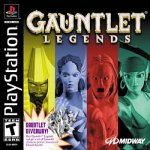 Go to Sumner's Tower. Enter the portal to the Castle Bonus Level. At the very beggining of the level, you will see a chest. Ignore it, and shoot the wall behind it, and go through the secret trap door. You will go to a level that is the same replica of the designing rooms for the creators of Gauntlet, Gauntlet Legends, and Gauntlet Dark Legacy. Also, when you read the names of the designers, they will have nicknames. There nicknames are cheatcodes that you type in after selecting a character. Also, when you are in the secret room, shoot the election poster. You will find the creator's pet hamster as an enemy. In one of the designing rooms, there will be a floating and shining red stone. I know that stone has to do something with a secret cheatcode but i'm not sure what it is. When you exit the secret room, you will return to Sumner's Tower.

Marker's Javelin can be found in the Fissure level of the Ice Domain. This weapon is useful in defeating The Plague in the Skytown.

The Flame of Tarkana can be found in the Spire level of the Skytown. This weapon is useful in defeating the Yeti in the Ice Domain.

The Scimitar Of Rasha

The Scimitar of Rasha can be found in the Cave level of the Warrior's Mountain. This weapon is useful in defeating the Chimera in the Valkyrie's Castle.

The Ice Axe Of Untar

The Ice Axe of Untar can be found in the Treasury level of the Valkyrie's Castle. This weapon is useful in defeating the Red Dragon in the Warrior's Mountain.

Reach the first end Boss and have a "Stop Time" item. As you are about to die vs. the Dragon, turn on the "Stop Time" item. Make sure it is still running when you lose the life. Choose to continue, and enter any level besides a Boss level. Then, time will be stopped in all levels, monsters will not regenerate, and nothing except poisoned food will harm your character. You will also have free reign on any item, however you will gain hardly any experience points.

Death will die when it takes 100 HP or is hit with a potion.

If you know where Death is hidden, do not open the container. Instead, use a potion nearby and you should hear Death scream. Open the chest or barrel for a fruit.

Exit through the secret door in the last level of The Trench. Then, collect fifty coins in the bonus level to unlock the Sumner at the character selection screen.

Go to the Cliff level in the Mountain Kingdom. Find all switches, then go to the area with the exit. Do not step on the exit portal. Instead, head down until you see a trapdoor with a skull and crossbones. Step on it and you will be transported to a room with many coins. Collect fifty coins to unlock the Minotaur at the character selection screen.

Go to the bonus level in the Castle World. Collect fifty coins to unlock the Falconess at the character selection screen. She has the same turbo attacks as the Valkyrie.

Play through the second level of the Ice World. There is a trapdoor at a dead end on top of the pile of crates at the end. The trapdoor is found by climbing the slanted crates to the top. Then, circle around until you get a chance to go back down. From there, climb the other set of slanted crates, located before the exit, and standing atop the trapdoor. Collect fifty coins inside the door to unlock the Jackal at the character selection screen. He is a more powerful form of the Wizard.

Go to the first town level. Find all main switches, then go to the portal. When you reach the portal, backtrack a small distance until you reach a hill with a chest, a switch, and death. Avoid death and hit the switch. Head in the position the switch is pointing and you will reach some zombies and the trap door. Stand on the trap door and collect fifty coins to unlock the Tigress at the character selection screen.

Successfully complete the game to receive permanent anti-death, which allows you to steal health from death.

Enter "Gasaway" as a character name to get to level 99.

Enter "LOCK UP" as a new character name.

Enter "MESSIAH" as a new character name to activate all codes.

We have no unlockables for Gauntlet Legends yet. If you have any unlockables please submit them.

We have no easter eggs for Gauntlet Legends yet. If you have any unlockables please submit them.

We have no glitches for Gauntlet Legends yet. If you have any unlockables please submit them.

Submit a cheat for Gauntlet Legends