Use the above links or scroll down see all to the Xbox 360 cheats we have available for Gears of War 2. 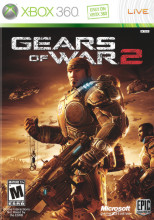 Day One Get Ammo Quick!

In act 2. When you find carmin, the is a bunch of grubs running. Get your sniper rifle and shoot them. Do this 5 times and he will say : Thats 5 Mother f***ker.

When your on any map, and on the locust team, pick Skorge. When you start the game you have a smoke grenade, throw that smoke grenade at your feet, and right when its about to blow up, roll (A button). You should be flying in the air. But if your not scared of heights, check this out, you can keep taping the A button to go higher but the thing is when you go a certain height you'll die. It sounds stupid but its fun try it. It may take a few tries to get it right and it mostly works on avalanche near the wrecked trucks.

On your chainswa gun, you can usually cut threwregular locus, but diffrent types of locus can't be cut threw. I've tried this many times, and you can only cut threw regular locus solders, and what I like to call, the locus Jr. (grunts) So if you're going up aganst a boomer or somthing like that, eather A, shoot till' he drops, or B, bash him with your shotgun.

If you want to survive horde's 50 waves, try this:
1. Teamwork/reviving. Every life is sacred and you can't go alone on high levels.
2. Camping. You'll need to camp and shoot locust down in HIGH levels or be shot down. Boomshields are recommended to be planted, and any grenades.
3. Full teams - Try a private match with friends that are guaranteed to play for a few hours of horde. Also, hosts in public matches might start leaving, idle people aren't helping out as well.
Try to beat horde! Dangerous, dangerous horde.

In gears 2 in horde/campaign, try to keep tickers and flamethrowers away from down friends. If you shoot a ticker or flamer, flame boomer, and your friend is nearby, he will die along with the enemy, and it counts as you killing him, which gets people (me) mad. Flamethrowers on fire are the worst for a friend.

Take a boltok pistol, and shoot a boomer 2 times, the first time in the shoulder, and with shot number 2, you need to knock his helmet off. Now until you kill him, when he inhales he wheezes. This can be heard better when you are too far away from him to hear the footsteps. Pathetic, but funny.

When killing locust make sure that if they have a sniper keep your head down till after they fire. If the have a shotgun blindfire them and if it's the big guys like maulers, boomers, and grinders you might want to find some cover fast but if its a butcher, don't be afraid go at them hit wait till after he swings then repeats 3-4 times then nail him with your shotgun. If it's wretches just melee (B)them but for tickers melee them then shoot them. (Note:when meleeing tickers if you hit them twice they blow up right away.

Go to main menu and go to hord. Then pick Palivion as the map you are playing in. Then when you start in Palivion, there would be a big hole and an ammo box near the hole and a shield inside the hole. Get the ammo and get inside the hole and get the shield. Then place the shield near the hole and no one can go inside (unless if the little guys kick it down. ) And then when the Locust appear, hide inside the hole with the shield placed and no one or the big guys can come in. Just kill the little guys before they kick it down. And if you run out of ammo, there's an ammo box outside the hole. But make sure the area is safe before you go out. TIP: If you die, the shield will not be inside the hole on the round you just died. You'll have to wait on the next round to get it back. So don't get yourself killed a lot or you'll end up dying a bunch of times. Have fun and tell you're friends or cousins about this, it's fun.

If you are playing a mode like wingman, when you down an enemy grab him instead of executing him unless he is the last enemy, if that's the case curb stomp him, pummel him, or my personal favorite the torque bows "can opener".

Keeping Your Xp After Quiting

After the fourth update, when you quit a online matchmaking game you normally lose xp, but I realized if you play hoard online or a private match, you don't lose xp. You may no get a lot of xp since you only get 150 xp, but play the full 50 rounds you get a whopping 7,500 xp.

Using the Shotgun Against Locusts

Always shoot locusts from close range to blow them to pieces.

Thanks For The Ride!

In horde mode, go on the Day One map (or any map of your choice that has a set of stairs). If you're at wave 10 of horde there should be those bloodmounts and beastriders on them. Get a boomsheild then go on a set of stairs and set the boomsheild down in the middle of the staircase (A button). When a bloodmount comes up to the sheild, kill the beastrider, then jump over the sheild and there's your free ride! But remember this, its hard to shoot when your on the bloodmount because it moves pretty fast and the only two ways to get off a bloodmount is if a friend kills it or if a locust kills you.

While Riding the Reaver when Skorges King(Queen) Reaver grabs you shoot its arm to make it release you. Note: This is when your above ground. Do this 3-4 times and it will eventually die.

Beat the game once to unlock insane. On insane, go to act 1,chapter 3, Rolling Thunder. At the beginning, there will be 3 cowboy hats for you to shoot. Switch your weapon to the pistol. Dizzy would start talking. Press back to shut him up. The first hat is on the wall of a building next to the barbwire (on the left side). If you hit it, Marcus would say "that's one. Move to the left side and stand on the ramp. The second is in between the two wheels of the center you pass by. Shoot it and you would hear "that's two". Remember to press back when Baird starts to talk. The third one is on the right side of the second fuel tank in front of the center with the earlier cowboy hat. Shoot it and wait 5 seconds and Marcus will bend over and say "Yee Haw!" and everybody would immediately equip cowboy hat and it would stay like that for the rest of the chapter.

When you get a boomshield drop it and take out your pistol and press B left (on your d-pad or direction of weapon you wish to use) and press X but you have to do it fast.

Shoot a locust until he tries to crawl to be revived. What you do is if you have the high- powered revolver shoot him in the head and his head will explode. Then you are free to say "Puppy".

During gameplay, you hold the sprint and after 5 seconds roll. Now you will not have to stop sprinting for a while and run through the whole game.

Beat the game once to unlock insane. On insane, go to act 1,chapter 3, Rolling Thunder. At the beginning, there will be 3 cowboy hats for you to shoot. Switch your weapon to the pistol. Dizzy would start talking. Press back to shut hi up. The first hat is on the wall of a building behind the rig(on the right side). If you hit it, Marcus would say "that's one. Move to the left side and stand on the ramp. The second is in between the two wheels of the tank you pass by. Shoot it and you would hear "that's two". Remember to press back when Baird starts to talk. The third on is on the right side of the second fuel tank in front of the tank with the earlier cowboy hat. Shoot it and you would hear "Yee Haw!" and everybody would immediately equip cowboy hat and it would stay like that for the rest of the chapter.

Make toast for the Delta Squad! After you pick up the "Trinity of Worms" in chapter 5, The best laid plans, encounter 6, proceed to the balcony where there are 2 ammo boxes. At the center edge overlooking the molten pit, there is a box on a pillar. Shoot the box and find a toaster inside. Press X to make toast for the squad!

Skorge, no matter how intimidating, isn't hard to battle at all. When the battle starts, Skorge will saw down what looks like a light. Then he will have a chainsaw duel with you. Rapidly press B. You will beat him at that easily. Skorge will jump up behind the pillars and shoot at you. Don't do anything except for take cover. After a few rounds of bullets, Skorge will rev up his chainsaw and saw at a pillar. Run to the end of the room opposite the end where he's sawing or else you will get crushed by a pillar. Repeat a few times and eventually you'll finish him off with the chainsaw and he'll jump on his Reaver and then that's it for that part of the battle.

If you ever get swarmed by wretches, DON'T shoot them. Just pull out your pistol and hit them. It saves you ammunition and its a lot easier.

When an enemy is down (not dead) you can use execution moves. All you have to do is stand on or near an enemy that is crawling. They are listed below.

If you want to chainsaw a person, make sure you aren't getting shot ,because if you are, the chainsaw will lower and your guy will move back. Also remember that you can chainsaw certain locusts

To kill flamers or flame boomers, shoot the tanks on their backs. But when you do, get away from them because they blow up.

Keep your distance if there are more than 1, they will make a big explosion.

We have no cheats or codes for Gears of War 2 yet. If you have any unlockables please submit them.

To unlock Anthony Carmine as an unlockable LIVE multiplayer character you must complete ACT 1 on gears of war 1.

Beat the game on any difficulty.

Shot an enemy until he falls down walk over to him. (you need a frag grenade) stick him with it and real quick take him as a meatshield. He will blow up and it wont kill you. Do it 10xs and you will get the achievement.

The Around The World, Again Achievement

Win a match at all multiplayer maps shipped with the game in any mode, online or off.

Complete all missions on co-op campaign.

Use a meatsheild to save your life 10 times (any mode).

Kill 10 enemies with a grenade while down but not out (any mode).

We have no easter eggs for Gears of War 2 yet. If you have any unlockables please submit them.

We have no glitches for Gears of War 2 yet. If you have any unlockables please submit them.

We have no guides or FAQs for Gears of War 2 yet. If you have any unlockables please submit them.

We have no achievements or trophies for Gears of War 2 yet. If you have any unlockables please submit them.

Submit a cheat for Gears of War 2