Use the above links or scroll down see all to the PlayStation 2 cheats we have available for God of War II. 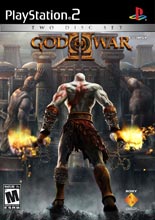 Immediately after you defeat Euryale, you will get unlimited magic to use with your new skill. To complete this part of the game, you must kill five enemies by turning them to stone and shattering them. However, if you face the rear wall and position yourself directly in front of the center spawn, you can cast Cronos' Rage, roll right, cast it again, roll back to the left two times, cast it again, and repeat. You can build up massive combos by doing this to get lots of Orbs. Once you get a 2,000 hit combo, break the combo off (do not cast for about four seconds) and start again. You will get over 1,500 Orbs for each 2,000 hit combo.

This place is quite familiar to most gamers, it comes before the place before you have to burn the phoenix feathers & release the lava phoenix. In front of the steam, there will be a sheild like carving in the wall, it has to be broken by Typhon's bow (magic bow). There will be a Gift of Magic but what is unknown to most gamers is that there is a hidden wall in the right side of the Gift of Magic. Break the wall, there will be a lever inside. When you pull it, the spikes will withdraw, making your passage through the lava room totally easy. It is made in such way that you can't see the walland the lever properly so you may not find it the first time, but it will ensure that you won't die.

When you are going to the challenges press left right down down left circle you get to play all the levels.

Just before the barbarian king takes you on his horse, you see a strange looking chest. If you come back to the place after doing several challenges, you can open the chest to get about 9,000 orbs!! There is also a phoenix feather in the other chest.

Each time Challenge 1 in Challenge Of The Titans mode is successfully completed, you will get one Cyclops Eye. You can repeat this as many times as needed. When the Bowmen (little penguin-like creatures with axes) call the Cyclops with their horn, just kill the Cyclops and not the Bowmen. After you rip the Cyclops' Eye out, the Bowmen will call another Cyclops. You can keep doing this until you get all twenty Cyclops Eyes.

Lakhesis is the first sister of fate you confront if you notice there are grappling hooks around the battle ground use those when ever you feel overwhelmed by her, reflect her energy blasts and hit her with light attacks. Atropos will then fight you in your past trying to destroy the sword used to kill Ares, simply use your bow to fend her off, if you need magic orbs focus on the grunt warriors she sends to fight you. The hard part comes next focus on Lakhesis(the flying one) when she falls down from flight stop time exposing the other sister in her mirror dimension shes stuck in time so beat her down and she falls to the floor, she will get trapped in her mirror break it quickly before the effect wears off, repeat on other mirror. After this you will be able to trap them in a combined dimension break it quickly and there defeated congratulations.

Best-Hidden Gorgon Eye In The Game

After acquiring the Amulet of the Fates, stand on the pressure plate in the back of the room. As soon as the pillars stop rising, activate the amulet which will slow down time. Proceed to jump up to the TALLEST pillar on the RIGHT SIDE. Quickly face to the wall on the right and destroy the carving in the wall. The wall will crumble, letting you reap your rewards, A Gorgon Eye. This was considered, by the creators, to be the most well hidden chest in the game.

Once you get the Golden Fleece from the Cursed Cerberus, you can use it to block and reflect enemy attacks by pressing L1 at the precise moment. However, if you continually press L1 as fast as possible, you will usually block and return most attacks.

This Urn is found in Atlas. When hanging from his underarm, you have to break two stalactites to continue, but there is also another one you can break. Break it and then follow the hole up to find a red chest and the Urn. This Urn gives you unlimited Rage Of The Titans.

Near the area where you get the Spear of Destiny, take the time slowing statue and push it near the waters edge from where you first came. Try to make it so you can start the time slowing from the other side of the pool. Then, press R1 across the other pool and roll into the room where the Urn is located. This Urn gives you unlimited magic.

Urn Of The Gorgons

Urn Of the Gorgons: After you get the Golden Fleece, backtrack to the conveyor belt with the Gorgon eye things that turn you to stone, then reflect the beam back at them. There will be three chests, one of which holds the Urn. This Urn enables your weapons to turn enemies to stone.

Urn Of Gaia: This Urn is found in Rhodes (the first level). Take the stone block that you push with the golden bird on top, which you need to first break to get some Red Orbs, and push it between Kratos and the gate. While Kratos is on the button to open the gate, kick the block to the other side and then quickly roll under the gate. Then, push the block to the right and you will see three chests on a ledge in the background. Push the block to that area and double jump, then lift yourself up. This Urn allows you to gain ten times the number of Orbs than normal.

The Hammer you receive can be a very useful weapon, you just have to know when to use it. The hammer is good for 1 on 1 battles or slow enemies and can also do some serious damage in boss battles. One good strategy is hitting with the hammer a few times, switch back to your blades and evade.

In order to defeat Athena, when she tries to slam you with her hand, dodge it and keep attacking her hand until it goes limp. Then hop onto ledge and throw a rock from the catapult. That should be one way to defeat her!

Press R1, R2, R3, Circle and Square simultaneously before the 'Sony Computer Entertainment Presents' screen to activate. If the code has been entered correctly The letters on the screen will turn purple as confirmation.

Unlock All Levels And Play Them

When you go to where the challenges are press left right down down left and you can unlock all the levels and play them.

Part way through Rhodes (the first level), you will drop down into a bath house/sauna type area. Instead of continuing and diving down, jump out of the water onto the area around it. There should be two screens which are breakable. Behind one of the screens are two topless women. If you walk up to them and press Circle, a sexual mini-game will begin where you must complete a series of button presses. Once you complete the mini-game, you will get Red and Green Orbs. You only get the Orbs once; however, you can play the mini-game as many times as desired.

Beat the game on hard.

When you are almost to the area where you have to burn the Phoenix feathers (the part where you are climbing on the rope over the lava and enemies shoot the rope down and you must climb on the wall and then ceiling to get to the next place), as soon as you turn the corner, where you have to jump over the lava and fly, take out the bow instead and shoot the wall below a few times and it will open, revealing the Gift of Magic.

When you get to the area where the second translator jumps off the ledge to avoid reading the book, place the fate statue by the gate at the end of the hall. Go through the mirror that rewinds time, freeze time, then roll back to where the statue was originally. Open the chest that is now there to get the Gift of Health.

Successfully complete Challenge Of The Titans mode with a "Spartan" or better rank. This Urn allows you to exchange Crono's Rage with Poseidon's Rage.

Successfully complete Challenge Of The Titans mode with a "Mortal" or better rank. This Urn extends your allotted combo meter time so you can perform higher combos.

Successfully complete the game on any difficulty setting and save when prompted. Start a new game on the same or lower difficulty setting to have all weapons including the Blade Of Olympus and magic at the level attained during your previous session. Additionally, the "High Resolution" and "Story Format" movie options and "Credits" option will be unlocked at the "Treasures" menu.

Successfully complete the game to unlock the Titan difficulty setting.

Arena Of The Fates Mode

Get a "Titan" rank in Challenge mode to unlock the Arena Of The Fates mode.

Challenge Of The Titans Mode

Successfully complete the game to unlock the Challenge Of The Titans mode.

We have no easter eggs for God of War II yet. If you have any unlockables please submit them.

We have no glitches for God of War II yet. If you have any unlockables please submit them.

Submit a cheat for God of War II