Use the above links or scroll down see all to the PlayStation 2 cheats we have available for God of War. 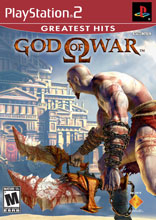 To kill an enemy without all the swinging just launch the enemy up in the air (will work for most enemies) by holding triangle. When you jump up in the air with them (keep holding triangle to jump up! ) press circle and you'll grab the enemy and throw him down. The enemy should bounce back up to you. When this happens keeping hitting circle till either the enemy dies or when the circle button appears above its head. This really helps when you're low on health.

This is the cool way to find unique ways to punish your enemies, and you have it from the start. Simply hold Triangle to perform Ascension. You’ll fly up in the air with one big swing, as will your enemies. Up there all kinds of combo hits and throws await your foes; especially once you level up and can perform Cyclone of Chaos (L1 + Square) and Falling Helios (L1 + Triangle).

Get Army Of Hades

To get Army of Hades, you must first beat the giant minotaur boss, run up the stairs thats behind the giant doors, grab the head from the casket, run back down the stairs, and walk into the god power door.

Binotaurs are easy to beat if you know how. Just use the square, square, triangle combo and keep hitting them and knocking them down.

This is a professional build that will help you immensly through out the game. Start a new character and keep leveling up your blades until they are around 4-5. Then level Poseidon's Rage to the max. Save up orbs and level Zeus' Rage to the max as well. You'll also need to save up for Blades of Artemis, so keep lots of orbs in stock. If you stick by this build you should be fine for the entire game.

Beat the game on any difficulty.

Never worry about running out of magic, because there is always a magic filled chest around the corner. Your magic meter should not worry you because you will always have chances to fill it up. So with that information, GO CRAZY WITH YOUR MAGICICAL POWERS.

After you get Posiedens Trident and you can swim underwater, try to look for the nyads in the water. If you encounter one grab them with O and you will then kiss them. They will then give a magic feather.

Most Monsters Have Weaknesses

A good way to get a cyclops to go down in a couple of hits is to throw a Zeus' Fury Lightning Bolt at their big eyeball. Those Harpies can fly but they have a bad weakness, freeze them with Medusa's Gaze and they will fall right to the ground and shatter. You get extra red orbs for doing these weakness moves. There are many more monsters in the game that have weaknesses to. Try to discover them.

Get Alot Of Red Orbs

After you kill the King Hydra and you are in your boat on the way to Athens, you know the two women that are lying in your bed. Get on the bed and press O. You will then have to push a series of buttons and if you passed it, you will get a ton of red orbs.

Go to Mt. Olympus. Go into the temple and break the two large statues(Aries and the Pandora dude). It will give you a bunch of numbers. Unscrambled, they are a toll free phone number. The number is 1-888-447-5594. The creator of the game and Craetos will talk to you on the phone.

To get Unlimited Mana, go to the Level Up Screen and press Circle, Circle, X, Square, L3, L3, L2, X. Then go back to the game and use a magical attack to unlock unlimited mana.

We have no unlockables for God of War yet. If you have any unlockables please submit them.

We have no easter eggs for God of War yet. If you have any unlockables please submit them.

I discovered this glitch while playing around one day. Throughout the game there are pedestals where you must drag a block onto it to open a door. Well, it is really slow to drag a block around, and I don't have that kind of time. Stand on the pedestal so that the door is open. Then, run in small, quick circles so that you are popping on and off the switch. The door should be flipping back and forth rapidly, so that it doesn't completey close or open. Now step off. Done crrectly, the switch will raise up and the door will remain opened.

Submit a cheat for God of War