Use the above links or scroll down see all to the Game Boy Advance cheats we have available for Golden Sun. 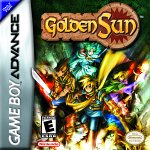 An Easy Way To Beat Saturos

When you have to fight Saturos at the top of the Mercury Lighthouse, an easy way to beat him is to first go through and finish everyting in the Kolima Forest with Mia. Get the Djinn in Tren and in Kolima and Fight Trent. In going so, you should have 2 Djinn for each element. It should also get you leveled up well to the point where beating Saturos is a breeze.

Fusion Dragon will Probably one of the hardest fights you will have, except for the deadbeard one. at the begining of the battle, usegranite to put a barrier. DO NOT USE ANY OF GARETS DIJINN OR PSYNERGY( Except for the Dijinn Flash). Fusion dragon's Resistance to fire is incredible, so dont use Him. Instead, use the Psynergy Garet has " Protect " to raise the Party's Defense, and the Dijin Falsh, then Set it to him when You have the Chance. With ivan, use the dijinn You don't really need for him in the battle so You can then Summon. With Mia, use all the Dijinn she has Except for the Healing ones, or You'll lose Wish and Wish Well, and Heal at Least Once every Two Turns. With Issac, Use all His Dijinn and then Summon Judgment. in about 5 Minutes, You should beat him. I Beat him in 4 Minutes, so He can't be that hard with this Strategy. Good Luck!!!!

To summon stronger djinn, you need more than 1 of the same type djinn. Put them all on standby, and you can summon stronger ones. To get Judgement, you need 4 earth Djinn. This is one of the strongest Djinn in the game (Useful when fighting Saturos and Menardi).

The kikuchimonji (I don' know how to spell it) is dropped by fenrirs in venus lighthouse. But the chances 10%.

If you have beaten the game and saved information it says you cannot continue play with, you can get a password that will pass on your saved information to Golden Sun 2. When prompted to press start right after you turn the GBA on press and hold left and R, while holding these press A. You should then come to the basic menu but it has an extra option square on the right that looks like an envelope, this is the "Send" option. NOTE:The way to know for sure if you can do this is that you have a save file marked as "Clear Data".

After selecting "Continue" get the file you want to resume hilighted and then press and hold start, select, R, and L. Instead of where you saved, you should be in the sanctum of the last or farthest place you have visited, wether you have used it or not. NOTE: Some locations a file was saved at are impossible to use this cheat with. If you saved at one of these locations the screen will say "Unfortunatley, your data could not be recovered" Which just means that the sanctum trick won't work, nothing to panic over.

When you get into Lunpa and go up but stop at the rock. Use reveal and it will become a puddle of water. Use frost and climb up the ladder to the west,( DO NOT LEAVE THE REVEAL SCREEN, a way to do that is to go to the edge and do reveal again). Jump unto the ice pillar and travel along th east side of the town. Keep going until you come to a wall. Use reveal, you should see a spot of light that wasn't there. Press A and a secret door will open and inside there will be about five treasure chests. Enjoy!

Be sure to always level up because it will make the game a lot easier for you because you can beat bosses easier and you won't half to keep on rushing back for healing Items.

Get Tonic, The Mercury Dininji

Get into the Lunpa Fortress and go through it until you get into Master Hammet's cell. Dodonpa will appear and you will have to fight a monster. When you get out and start leaving Lunpa. A guy will appear and stay where you are instead of heading back to Kalay. Go back into the fortress and go find Donpa. He will have the lady blocking the entrance to the room move. Go in there and Tonic will be there. You don't have to fight it.

When you're trpped in between an X Square and the goddess in the Mercury Lighthouse, use the Ply Psynergy that comes with Mia. It'll let you progress, and be totally rad! But do not, I repeat DO NOT use the Retreat Psynergy that comes with Isaac! It'll send you to the beginning of the Mercury Lighthouse, which will force you to do you the whole puzzle over again, unless you saved before you used Retreat, which then you can turn the Game Boy Advance off, then turn it back on, and finally, load your data. Then you can use Ply and then you can progress, or you can use Retreat again, and have to repeat the whole turning off the Game Boy Advance or you could do the stuff in the Mercury Lighthouse you have already accomplished.

To complete Sol Santum Puzzle #1, it's really not that tough. Go to the block at the far right. You'll find your way from there. You'll have to go down a few times, though. Don't get tricked by that! I know this wasn't the best cheat code or hint, but if they're called a hint, it's not supposed to be told unless you're just dying to prove you got through alright.

Clan Of The North

When you fight Starus and mermraid together, beware because you will fight them again when they will merge into a dragon.

Go next to the left wooden wall of the fortress. If you have gotten the cloak ball from Babi use cloak in the shadows. You'll be able to enter the fortress unnoticed. Be careful if you don't use cloak inside the fortress you'll get caught, thrown out and end up doing it again!!!

Get frost with Mia, and use it on that water puddle under the gate and you can enter.

How To Get Granite The Venus Djinn

In kolima village, you'll see him behind a fence. Walk directly into the back of the house the fence is connected to [you can't see the door, camera angle]. Follow that secret passage and you'll come out of him.

What To Do When Your Out Of Psy Crystals

Name All Your Charaters

To name all your characters: press select 3 times and start a new game and name Robin(original name for the main character Isaac) and then Garet's name will come up and then Ivan's, and Mia's.

Your status is PRECIOUS. Don't waste it by equiping worthless items and Djinn. Also, remember to use stat-boosting attacks and Djinn during tougher battles. My personal favourites are Flash (fire) and Granite (Earth). These surround you with a protective aura and it's almost like Defense +80! Attack is vital against bosses and tougher monsters like Mimics and Living statues. Have Ivan know High Impact and boost your party's attack. When it comes to Agility: ALWAYS BOOST IT DURING BOSS BATTLES. It will allow you to heal wounds and status changes during battles, before your opponent can move a muscle. Zephyr (Wind) helps A LOT. Boost defense on characters that you need a lot, like Issac, when he learns revive, or Mia when she learns Wish/Wish Well. This helps a lot during battles with Saturos/Saturos + Menardi, Hydros Statue and Deadbeard. Curses and Evil spirits lower your stats. Get rid of them whenever you can. They can be only pure annoyance. Never equip cursed items to your character. NEVER! It really can mess you up.

Classes affect your Psyenergy. Djinn change your class. Some psyenergy is tougher than the psyenergy you have from equiping Djinn of the same element to the same kind of adept eg. If you equip 4 earth and three wind Djinn to Garet, he will be stronger than himself with 7 fire Djinn. Classes also effect things like attack, defense, agility and luck. The only thing you have to be careful of is losing psyenergy that you need for absoloute junk. For example, if you equip Issac with 4 earth Djinn, he will learn Revive. VERY handy indeed. The only problem is that if you equip a certain combination of other-type Djinn he forgets it for a useless pile of weak and unwanted psyenergy. Experiment with Djinn as much as possible. Remember also, that if a Djinni is on standby or recovery, it will not effect your class and psyenergy, aswell as your status.

When you battle the final boss [The 2 guys and then the big guy.] Make sure you have EVERY dijjni. If you dont he could be extremly hard.

When you see a little psynergy stone when you get farther in the game and you learn one of the many healing psynergy techniques you should use the healing techniques to heal your party then grab the psynergy stone. You will have full hp and pp plus you wont have to pay for an inn. However the psynergy stones get fewer and fewer the farther you go so dont always count on them bieng were you need them.

Use the inns whenever needed. Inns are your best and cheapest source to get healed quickly. Use them even for minor damage, or just to recover lost Psyenergy. Inns are inexpensive and efficient.

Carry plenty of herbs in dungeons. Even a small task in a dungeon can wipe you out. You will save more money by doing this than by having to revive one of your team members. You will also always have all your team members ready to fight.

If you have Ivan's Psyphenergy Reveal. Every time you see rocks in a circle formation use reveal, and you might find an item, or maybe even a secret door, which will lead to something even better. Also if you use Reveal when your near barrels and boxes, if you see a little shining light you might find something good.

To name Garat, Mia and Ivan when you name Isaac, press select 3 times.

How To Make The Goddess Proud In The Mercury Lighthouse

When you land on the little X in front of the goddess just jump over to her and use Mia's Psyphenergy Ply, and shell grant you a move to step in three times in the water before you sink, but only while steping on the X square.

On the black logo screen, hold L + R + LEFT and press B. A new option will appear. Select it to get "Password" or "Link". This lets you send cleared Golden Sun data to the next installment.

When you you are naming Issac, press Select 3 times and you can rename Garet, Ivan, and Mia.

We have no unlockables for Golden Sun yet. If you have any unlockables please submit them.

We have no easter eggs for Golden Sun yet. If you have any unlockables please submit them.

We have no glitches for Golden Sun yet. If you have any unlockables please submit them.

Bios of the Main Characters

Submit a cheat for Golden Sun