Use the above links or scroll down see all to the PlayStation 2 cheats we have available for Gran Turismo 4. 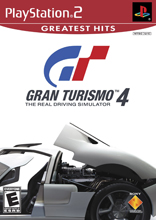 To get a cheap, fast car got to Tuning Cars and select HPA Motorsports. Go to Full Model and there will be a car that pretty much is a Volkswagon Golf but better. It's only about 32, 000 Credits and over 500HP. You can win the Turbo Car event in the Professional events with it.

Get a car that has 175 HP+ and if you have some money customize it. Then go to the Special Conditions areana and go to Rally d' Capri (the second one down, its blue). Win both of the races and you will have $10,000 more. That's not it, then go back to your garage and find TOYOTA RSC Rally Raid Car '02. Press X and then sell it. You will now have $265,000 + from selling it. Keep doing this until you have all the cars you want.

To get a Blue (acceleration) and Red (brakes) Licence Test Guide simply push R3 during 3, 2, 1, Start. It shows you the best route to go and where to start braking.

When you buy or win a new car, take it for an oil change. After the oil change, your car's horsepower will increase.

First, you need to have $200,000. Then go to the Italian dealer and buy a Fiat Coupe Turbo Plus. Then go buy the cheapest Ruf (Porsche)under the German Dealer and in new models. Then repeat the Club man cup using the Porsche. Then redo it using the Fiat after you upgrade it so it has at least 400 horsepower. After you have 2 Autobanchi's sell them and whoosh you all the sudden have a $316, 956 Maserati Gran Turismo S with 730 hp. But do not sell it! You only get 1 of them!

First you need a good handling car with about 250+ horsepower. Go to GT auto and make sure the oil is bright yellow. Then go to Special Condition Events and do the 1st race. It has to races, win them to get the Cadillac Cien. Then go to the next race event using the Cien (stock) and win it to get the Toyota RSC Rally Car. It is worth $263, 574 so win this event four times and you got $1, 054, 296!

While in a race in B-Spec mode, press R1 to switch to Race Monitor. Hold L1 + Right on the D- pad and you can make the race go up to 5x's faster. The only downfall is you have to stay on the Race Monitor screen in order to keep the race sped up, it switches back to 1x when you go to Broadcast View mode.

In any race that hosted at Fuji Speedway '90s you can make up nearly 30 seconds of time --- at about the 5th turn [The three small, slow turns (the chicane)], just simply cut across the grass and watch out for the wall (if you hit it you will most definitely crash) just watch out for cars exiting out of the chicane and you will hopefully win that race.

If you are a beginner on GT 4, when Ur doing the club man cup on the driving park beginner course, when you pass the 2nd turn, when you go past the big thing blocking the road, ct though the grass you can win easily!

A Good Way To Start The Game

A good way to start the game is to buy a car like a Mitsubishi Evo III GSR or a Mazda RX7 GTX and upgrade if you have the money. Then go to the Sunday Cup blah,blah,blah, you know the drill. But Wait! Don't sell the Autobianchi Abarth you got for winning just yet. Soup it up and enter into the Lightweight KK Cup. You will win almost all the time. For winning the Lightweight KK Cup, you will get a Ginneta G4 '64. Now you will have a car to race in the "1000 Miles!" tournament in the European Hall. Winning only one of these races will get you 125,000 credits and is well worth the hastle. Just remember to upgrade your G4, or else it will suck. Getting the money to upgrade might take awhile, but that's what the Autobianchi's for, remember?

Another Way To Start

First, you need both GT3 and GT4. You don't have to complete GT3, just get all the licenses and a lot of credits! Second, transfer your GT3 credits and licenses. If you have 3, 000, 000+ credits like me in GT3, buy a race car that's price around 500, 000 credits, a truck, and some cars (RR, MR, those cars). Then complete the beginner league. DON'T STOP, take your race car, soup it up and add standard or sports tires and enter the El Capitan endurance once you unlock it! Then take you cars and complete the next league. Complete endurance mode and take you cars and complete the Professional league. You will have lots of credits and cars.

After you cross the line in Infineon raceway (dosen't matter which one) start slowing down. Then go staight at the grass. If you did it correctly, your car should go flying up in mid air!

If you get the viper that you can buy, the you add all the upgrades and on the speed challenge and keep the original drivetrain, then you put the nos to the max and wait until you get to 6th gear, and hold the nos.

Choose a starting car with at lest 170HP and 170lbs or more of tourqe then make upgrades to it. After that go to beginer events and go to the sunday cup and do all the races and come in first in all of them when you finish that you will win a 8300 and some credit car by the time of wining all the races and selling the car you get 10,00 CR or more then go back to the sunday cup and you can clear the bords and do it all over again and keep saving money for a better car or just tune up ur first car.....HAVE FUN!

Using your GT3 save/GT4 Prologue save, the money and licenses you've earned can be transfered over to GT4 and have half of the licenses completed and have enough cash to buy a car you'd like.

We have no cheats or codes for Gran Turismo 4 yet. If you have any unlockables please submit them.

We have no unlockables for Gran Turismo 4 yet. If you have any unlockables please submit them.

We have no easter eggs for Gran Turismo 4 yet. If you have any unlockables please submit them.

We have no glitches for Gran Turismo 4 yet. If you have any unlockables please submit them.

Submit a cheat for Gran Turismo 4