Use the above links or scroll down see all to the Xbox 360 cheats we have available for Halo: Combat Evolved Anniversary. 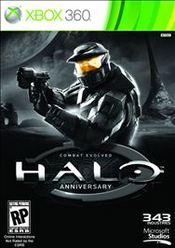 The Iron Skull provides: "Death carries a heavy price. Dying in co-op resets you at your last saved checkpoint. Dying solo restarts the level." You can find this skull in "The Pillar of Autumn" at the beginning of the level. Once you gain control, turn around and look behind two large boxes by the wall.

The Famine Skull is located on the level "Silent Cartographer". At the beginning of the level, turn around and walk around the island until you reach the large rock where the Pelican crash site is later located (where you obtain the rocket launcher and below the entrance to unlock the door). Walk up the rock to the top and claim the skull.

The Bandanna skull gives you unlimited ammo. It can be found on the fourth mission: The Silent Cartographer, after the covenant lock the doors you have to go to the security override building. In the tunnel before activating the console, turn right, go outside then turn right again and you should see the exterior of the tunnel you came through, the skull is on top of this tunnel at the far end. To get to it, you need to grenade jump (throw a grenade, jump and the force of it makes you jump higher) onto the structure and grab the skull.

On the last mission where you get the car, do as the game tells you to but don't stop when it tells you to hold this area. Keep going once you have to get out of the car, run to the ship. If you start to get shot at, turn around and throw a grenade (if you have one) or shoot the guy its helpfull to have a shotgun and a machine gun.

In the "Assault On The Control Room" mission, when you start crossing the ice bridge (the final bridge in the mission) located in the same canyon as the last pyramid structure housing the control room, quickly kill the Elites while ignoring all other enemies. Once the Elites are dead, get in a Banshee. Note: If the Elites remain alive, they will take off in the Banshee. Once you are in the Banshee, kill some of the enemies, then begin flying towards the control room entrance. There is a Forerunner structure extending straight up out of the top of the control room entrance. The structure is bound to the cliff walls by two half-ring-like structures. Fly up to the first of the two ring-like structures, and carefully land the Banshee on top. Get out, and walk to the edge of the structure on the right side (facing the cliff-wall). Remain idle until a song titled "Siege Of Madrigal" begins playing. Note: This does not work on the "Two Betrayals" mission.

Pause the game without a Kinect connected, and enter the "Options" menu, then press Up + A.

Put on bandana, BOOM, and grunt birthday (grunt funral if you have it)sculls. Go to first misson and put it on heroc. Play the misson and you got the acheavment. P.S. You can beat the campain like this.

The Recession Skull is found on the level 343 Guilty Spark. At the beginning of the level you'll get off Pelican E419. Turn left to face the left side of a very large green glowing tree. Basically you need to keep this heading walking straight ahead and avoiding obstacles. You should come upon a hill with two trees and a bush in the middle. The skull is behind the bush. -alternate way- At the start of the level go forward and a little left to reach the downed Pelican drop ship. Jump on the Pelican. The Pelican is facing a tree with a large lower trunk and a rock at it's base; left of this tree is another tree a little farther away. Face the right side of the tree farther away and start walking. When you reach this tree you'll see a tree about straight ahead; you need to walk straight toward this tree and around it (don't change your bearings). After walking a ways you'll run into the steep hill that is the level boundary; to the right you'll see a hill with two trees with a bush in the middle. The skull is behind the bush. You must have on the updated graphics to obtain the skull.

Here's how to find the "Mythic Skull". At the start of the level "Halo" you need to head toward the large waterfall. The skull will be behind the large rock that has plants growing down above it.

The Malfunction Skull is found on the level "Assault on the Control Room" in an under- ground section (past the frozen lake with the two Wraiths and the Banshee). When you first arrive in this large subterranean area there is a turret on a broken bridge to the right. Walk toward the bridge and look down in the chasm to the left of the bridge; there you'll see a conduit with the skull waiting for you. The updated graphics need to be enabled to find and obtain the skulls.

With the boom skull, with the Boom Skull, "Explosions have twice the damage radius. Light fuse, run away." This skull can be found in "Halo" right before the tunnel. When approaching the tunnel by warthog, drive to the left, get out, and walk up the narrow path until you reach the skull.

We have no cheats or codes for Halo: Combat Evolved Anniversary yet. If you have any unlockables please submit them.

The Foreigner skull is found on the level "Truth and Reconciliation". It is in the large hanger before the brig (which has the Covenant drop ship that Keys will pilot at the end) on the lower level. The skull is inside the door that is farthest from where you initially enter the room and to the right. The door is locked and only lets enemies enter the fight, so you need to run for the door when it is opening lest you should lose your chance.

We have no easter eggs for Halo: Combat Evolved Anniversary yet. If you have any unlockables please submit them.

We have no glitches for Halo: Combat Evolved Anniversary yet. If you have any unlockables please submit them.

The Back Story Of Halo