Get the latest Harry Potter and the Chamber of Secrets cheats, codes, unlockables, hints, Easter eggs, glitches, tips, tricks, hacks, downloads, hints, guides, FAQs, walkthroughs, and more for Game Boy Advance (GBA). CheatCodes.com has all you need to win every game you play!

Use the above links or scroll down see all to the Game Boy Advance cheats we have available for Harry Potter and the Chamber of Secrets. 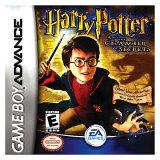 How To Beat Peeves

When You enter the restricted library, Peeves pops up. You have to fight him. Use flipendo when he goes into the knights, and when you beat him, you get the spell that removes the green cobwebs.

Whenever you are in an area where there are desks, go up to one and press the Action Button (B) and it will open up (most of the time to reveal a red tomato bean). Sometimes it will not open because the desk(s) are either in a classroom (sometimes) or they can be knocked down by a creature. Sometimes, there is also nothing in it or at least a Dungbomb.

The little booklet that comes with the game is wrong! It says that there are only twenty-five chocolate frogs but they're wrong. I have all ten lightning bolts (twenty-five frogs) and I just found another chocolate frog! I don't remember where they all were, but I found twenty-six of them!

First go into battle with the Basilisk use spells in this order: Vermildilius Trio, Skurg Trio, and (CC) Blast Curse and Beat it. Then start a new game on that file and you well be invincible.

If you get all 5 wizards cards you get a specail prize:

How To Beat The Basilisk For Real

After Tom Riddle is done talking to you take out the incendio spell it will beat the snakes to open the door faster and beat the basilisk easier.

TO find ALL 5 gem stones look in treasure chests and crstals. To find the last and hardest go to your vualt, walk right throught the gate, walk up and up the ledge, beat the fireturtle and up the ladder.You will come to a boulder by a swich (you can move the boulder) move the boulder so you can push the swich up. A spike thing will go up, move the boulder onto the platform it was once on and then go press "B" on the swich and the spike thing will come down smashing to boulder reviling the last gem stone. Talk to to goblin and the door will open. The vualt guardine (a Very big fire turtle) will attack you. 10-16 good blasts of Flependo will destroy him. THE NEXT SPELL IS YOURS AFTER YOU DEFEAT HIM! Good Luck!!!!!

Alohamora Spell And How To Get It!

To get the alohamora spell you need to collect 5 wiserd cards of the charms catagory. To help you I will tell you one of the cards that you could never find. Go to the portrit room. You see that door with bars over it on the other side of the room? Well look to the right and you will see one of the squares is a little darker. Walk over there and press your action button, a lever will come out, pull the lever and the desk will move out of the way reveling a swich, grab the chair and push it on the swith and there you go. just make sure you say thanks to me! Oh and one more thing the card will be in the room that you just opened. by doing this I got all the chocolate frogs.

How To Beat The Basilisk

Get out your flipendo spell after Tom Riddle is done talking to you. Charge up flipendo and aim it at the Basilisk. Let go of your charge button and hit the Basilisk. Note: You will need to repeat this step many many times until you finally defeat the Basilisk.

Collecting red beans is veeerrrryyyy important!! If you collect all 100 red beans, you will get a special surprise.

Here is a list of the spells that you get in the game:

If you want to save your game you have to find a book and walk up to it. Then press B and click on yes.

We have no cheats or codes for Harry Potter and the Chamber of Secrets yet. If you have any unlockables please submit them.

We have no unlockables for Harry Potter and the Chamber of Secrets yet. If you have any unlockables please submit them.

We have no easter eggs for Harry Potter and the Chamber of Secrets yet. If you have any unlockables please submit them.

We have no glitches for Harry Potter and the Chamber of Secrets yet. If you have any unlockables please submit them.

We have no guides or FAQs for Harry Potter and the Chamber of Secrets yet. If you have any unlockables please submit them.

Submit a cheat for Harry Potter and the Chamber of Secrets