Home  >>
GameCube  >>
Harry Potter and the Goblet of Fire

Get the latest Harry Potter and the Goblet of Fire cheats, codes, unlockables, hints, Easter eggs, glitches, tips, tricks, hacks, downloads, hints, guides, FAQs, walkthroughs, and more for GameCube (GameCube). CheatCodes.com has all you need to win every game you play!

Use the above links or scroll down see all to the GameCube cheats we have available for Harry Potter and the Goblet of Fire. 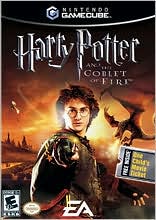 First, Jinx all Voldemort's skeletons. He will cast Abvra Cadabvra and you must move the energy ball over the skeletons. He will then pick up the grim reaper statue and make it float around. Dodge it and on about the third time it is thrown at you, it will get stuck in the ground. Move the energy ball over it, and it will lose a wing. Do this two more times and you will win.

If you get a character/friendship card, stand by Ron or Hermione if you are Harry to refill your energy. You can stand by both of them to refill it faster.

There are many beans in this level. Almost all statues have around twelve beans in them. This is the best level to raise your bean count to buy cards. To complete the entire level you will need to know the Herbivicus spell first. Note: Use Ron because his cards are very expensive and cost more than the others.

To kill the skwert's fast and painless just do the following: Make it run into a wall or hedge it will make it dizzy: then go behind it and charm the back of it. You might have to do this a couple of times but it will kill it. The only place in the game that you have to kill 2 skwert's is when you are at the end of the maze. Good hunting!

Throw cauldrons against all smoke stacks to bust them open to retreive beans.

Tp levitate a dugbog, cast the wingaurdian leviosa charm. If you keep the creature up, you can get rid of it with the orbis spell effect.

Tap the down key repeatedly to make the carpe retractum spell stronger.

When battling the dragon use the "r" button and try not to hit the flames or the trees etc. When you find a blue circle fly into it, it will boost your speed greatly.

We have no easter eggs for Harry Potter and the Goblet of Fire yet. If you have any unlockables please submit them.

We have no glitches for Harry Potter and the Goblet of Fire yet. If you have any unlockables please submit them.

Submit a cheat for Harry Potter and the Goblet of Fire