Home  >>
GameCube  >>
Harry Potter and the Prisoner of Azkaban

Get the latest Harry Potter and the Prisoner of Azkaban cheats, codes, unlockables, hints, Easter eggs, glitches, tips, tricks, hacks, downloads, hints, guides, FAQs, walkthroughs, and more for GameCube (GameCube). CheatCodes.com has all you need to win every game you play!

Use the above links or scroll down see all to the GameCube cheats we have available for Harry Potter and the Prisoner of Azkaban. 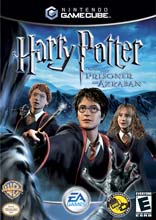 Get A Witch Or Wizard Card

This is for finding a hidden chamber on the 4th floor. When you enter the fourth floor corridor, there is a crystil ball. Light the ball with Ron's Lumos Duo. A beam of light will be emitted from the ball, hitting the eye on the opposing corridor. this will open a secret chamber contaning a card!

After your Third Potions Class, Ron will overhear Draco Malfoy and a Slytherin Prefect. They say they switched the regular Quidditch balls with jinxed ones. So if you don't find the Quidditch Ball Case in time, Slytherin will win the Quidditch Cup! So walk out to the Grounds, and you'll see the Ball Case behind the Clock Tower. As Hermione, use Buckbeak to fly into the Courtyard behind the Clock Tower. Fast - because you're being timed. Then, when you're in, use Glacious to Freeze the puddle of Water, and you'll turn it into an Ice Cube which you can Climb on. Climb again onto the next block and you'll face a Dragon Statue. Use the Draconifors spell and the statue will turn into a live dragon, and use it's fire to burn the rope which the Quidditch Ball Case was hanging from. Run down to get it. Then, quickly fly on Buckbeak again to the Quidditch Pitch Doors. Enter the Doors as Hermione and there will be a cut-scene that says that Gryffindor has won the Quidditch Cup!

When you see a bookshelf like the one in the north wing or the one on the 4th floor. Go to one and as you can see the shelf is divided into somewhat like sections. Play as Ron and go to each section and press the A button. Ron will search the shelf for things. You could find potions and beans there. Thats an easy way to get lots of beans. Oh, and when you see a colomn with a vase on it, cast flipendo at it and a bean will pop out. And you could find cards and pages of the book lupin gave you in the trunks of Harry, Ron, and Hermione. Go up to their dormitories and their trunks should have their initial on it, when you reach Harry trunk, play as Harry and go up to the trunk and press the A button. Do that with each character and their trunks, you could find pages of the Folio thing and cards.

On the Glacious Challenge, you must defeat one last monster before you return back to class. As Hermione, you must First fire Flipendo at the Monster. When it turns it back, keep firing Flipendo. Then, it will turn around, face you, and open it's oven a.k.a. mouth full over fire. Quickly use Glacious until it closes it's oven. Then, it will look as if it's going to explode, but instead, its torch a.k.a. arm will come soaring at you like a torpedo. Dodge it, and use Glacious on the torch. If you don't, the monster will get it back. Repeat until you Defeat.

This is how you can defeat the Dementors at the lake. Use short bursts to clear a path across the lake. Alternating between X and A. When the way is clear hold down X (or Y depending on where your Patronus is) until the spell builds up. Don't let go because when its fully charged the spell will release on its own. Now use A to get your Patronus to charge across the lake into the Dementor attacking Sirius. It will take about four charges to defeat him.

There is one last monster you have to defeat on the Carpe Retractum Challenge before you go back to class. The "Knight" will spin around trying to attack, and Flipendo is useless currently for it is guarded with many large shields. So as Harry, use Carpe Retractum to take off a shield when it has stopped spinning, and you'll find out that the shield itself is a monster. So just keep firing Flipendo at the shield-like-monster. Then, the it will get up on two feet at roar. Quickly use Flipendo at the the Green Spot on it's stomach to defeat the shield-like-monster. However, the Knight has more shields, and you have to repeat the same process until it has no more Shields left. Once there are no more shields left, you can fire Flipendo at the Knight until there's a cut-scene where the Knight gets alot of Swords. When the Knight is spinning around very fast with the Swords, use Carpe Retractum to take his head off. Congrats, You have Just defeated the Knight!

When you unlock Buckbeak, get on him and fly around. You can land in places you can't normally walk to.

Have Hermione repair the dragon statue with Reparo. Then, shoot Draconifors at it to light the bush in which the fairies are hiding in. The fairies will get mad and attack you. Then, have Hermione shoot them with Flipendo then use Glacius on them while they are on the ground.

Each character (Harry, Ron, and Hermione) has a special ability. Use Ron to find hidden passages. Use Harry to jump long gaps. Use Hermione to crawl under small spaces. This is useful when getting spellbooks or escaping Trolls and Prefects.

Unlocking The Locked Door And Chest

In order to unlock the locked door on the Sixth Floor and the locked chest in the Muggle Studies area, you have to find and return all of the lost objects from the notice board in the Gryffindor common room, until you find the key. It is located behind the statue on the First Floor. You can now open the door and chest using the lost key.

Using Hermione, go to every fireplace around the school, including the Gryffindor common room fireplace, and use the Glacius spell on them. By doing this, a Famous Witches or Wizards card will appear. Also using Hermione, purchase the Snufflifores Spellbook at Fred and Georges shop for 50 Beans. Using this spell, you can turn flying books into mice, which will run away into a mouse hole located within that room. When the mouse enters the hole, either a rare card or Bertie Bott's Beans will appear.

You can get lots of beans and Wiggenweild Potions in Fred and Georges bathroom. Play as Ron and go to the back room. Go up to the robes and press A for both sides. Beans and sometimes Wiggenweild Potions will appear. Go through the secret wall, then go back to Fred and Georges. Go to the robes and do the same thing. Keep going back and forth and you will have plenty of beans. Also when using Harry, Hermione, or Ron, fire your attacking spell at a bush. A bean will appear. Continue to do this as many times as desired.

Looking for potion ingredients? Try speaking to Glanmore Peakes on the Sixth Floor!

Go to Fred and George, use Glacius on the broken toilet and they will give you a wizard card.

We have no guides or FAQs for Harry Potter and the Prisoner of Azkaban yet. If you have any unlockables please submit them.