Use the above links or scroll down see all to the GameCube cheats we have available for Harvest Moon: Another Wonderful Life. 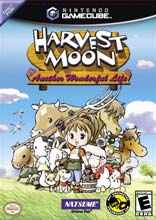 Pressing the Start button while another controller is in the third slot does not give you fake money. It's perfectly spendable. Also, if you press Z you get 99 of many of the items in the game. All of the tools, hybrid seeds, cooked foods, records, milk. It's kind of different each time. I recommend you only use one or the other, or you're going to have a ridiculous ammount of money.

Okay, if you put a fertilized egg in the incubator (the crate full of hay in the chicken coop), every night before you go to sleep save your game. Once Nik, Nak, and Flack tell you your egg is hatched and tells you if it's a male or female, turn off your gamecube. When you turn it back on you should have a different chicken then you had before you turned off your game. I've done this twice and it has worked. Sometimes it'll take a while for the chicken to change so keep turning on and off your gamecube until it happens.

You can grow trees in any season, but they only give fruit in one season.They give you 16 fruits per season. Apples and grapes give fruit in fall and the others in summer. Never plant other crops next to trees or they won't get enough sunlight. The good thing about the shade is you barely ever have to water the trees. And yes, the grapes ARE on a tree.

Alarm Clock In The First Chapter

First put a controller in the third socket, then make sure to be out of your house,and push down on the directional pad which looks like this, +, for those of you who are confused. Afterwards go into the house and you should have the alarm clock. If it doesn't work the first time you might have to do it a couple of times. But it does work!

Plug a controller into the third controller socket than push the start button in for about 15- 30 seconds and let go than you will have 10,000 in gold. Don't do this offen like I did I was rich but it messed up the story line.

Yeah, you saw that code where you hit start with the controller in the third socket and get 10,000G. Well, It's actually fake money cuz it don't work for Van's shop or at Vesta's farm. It works in the ledger though, so I bought lots of animals.

This scared the heck out of me so take caution. First you must be married. Do that cheat where you insert a controller in the third socket. Keep hitting Z and looking in your rucksack until you have the Blue Feather. Give one to your husband and he will say Aha! or something like that. Then the game will just freeze, and a loud and never-ending beeping noise (alarm) sounds. You cannot do anything except turn the game off, so save before doing this.

This cheat allows you to have as much money and items as you want. To do it you have to have a second controller in the third controller slot. To get money press the start button to gain 10,000 gold. For secret items press the Z button on the third controller. (Note: To be able to do these cheats you have to be out of the start menu or the rucksack menu. Also, by using the second cheat often it may mess with the game's storyline, so don't use it a lot.)

Add A Cady, Rare15, and a Mushroom

Tartan is a talking plant that tells you what seasons to plant rare plants. Get him in the 2nd chapter in spring by walking in Takakura`s house.

We have no easter eggs for Harvest Moon: Another Wonderful Life yet. If you have any unlockables please submit them.

We have no glitches for Harvest Moon: Another Wonderful Life yet. If you have any unlockables please submit them.

Marriage to Rock Guide and FAQ

How to get Engaged (All 3 possible husbands)

The ultimate guide (not for your whole life, though!)

Making money from your livestock

Gustafa, up to chapter 4(so far)

The SON of Marlin

The Best Recipes EVER!!!

Your Farm and You

The Know-It-All FAQ of Harvest Moon: Another Wonderful Life

Become Friends with Your Neighbors

Harvest Moon: All about Gustafa

Harvest Moon... its yo guide

Submit a cheat for Harvest Moon: Another Wonderful Life